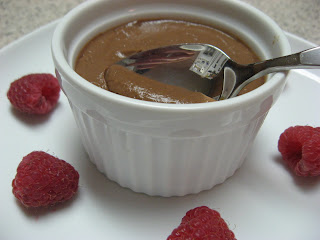 Gillian's vocabulary is growing by leaps and bounds.  Pretty much every day she surprises me with new words, things that I didn't realize she knows.  The new one from this weekend was "band-aid."  That one was a direct result of her exerting her independence and trying to pull out one of the kitchen chairs without any help...  I'm also quickly discovering that the second child experiences some things much earlier than the first.  I'm sure some of that is because I'm not as cautious with Gillian as I was with Brianna.  Or maybe it's just because I'm too tired to put up a fight a lot of the time... =)

The intersection of these two things is that the word "shawkit" was a very early addition to Gillian's vocabulary.  Brianna is a fan of all things chocolate, and Gillian seems to be following in her footsteps.  More recently, I had to decipher "zert" which when put into context turned out to be "dessert."  If Brianna asks for dessert, Gillian wants some too.  Now.  The funny thing is that once she's had some "zert" she'll quite happily go back and finish the rest of her dinner if she wasn't done with it.

I'm sure you can all guess that this week's Tuesdays with Dorie selection was very popular around here.  While I seldom make anything out of a box, there is often instant chocolate pudding mix in my pantry because Brianna gets such a kick out of "making" it.  So she was absolutely thrilled that I was making chocolate pudding this week. 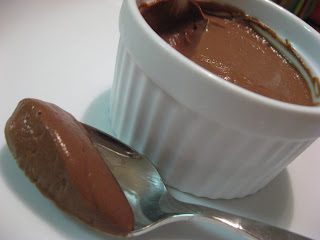 The actually making of it was...interesting.  I can't remember the last time a seemingly simple dessert dirtied so many dishes in my kitchen.  =)  Dorie recommends using the food processor for a lot of the steps in this recipe.  Next time, I'm going to pass on that.  All was well as I pulsed the eggs and sugar and added the dry ingredients.  But when it came to adding the hot milk, things got messy.  While I was carefully watching to make sure I didn't exceed the quantity of liquid that my processor can handle, I didn't count on there being a ton of foam.  And things sloshed around enough that I was really afraid that the liquid was going to leak out the middle.

Once I poured the whole mess back into my saucepan, I cooked it until it thickened and the foam subsided.  I dirtied a few more dishes by pouring the thickened mixture through a fine-mesh strainer into another bowl (it may not have needed it, but I like to make sure there aren't any lumps or bits of egg).  Then I whisked in the melted chocolate, butter and vanilla.  I ladled the finished pudding into ramekins--four 4-ounce and four 3-ounce.  Brianna was quite disappointed that the smaller ones were for her and Gillian.  =)

The verdict?  Jamie said that the first thing he thought of was "creamy."  Gillian and Brianna quickly polished off their portions.  I thought it was pretty tasty, but I think the chocolate pots de creme from Cook's Illustrated are still my favorite (a post for another time).  I can definitely see myself making this again, though without the food processor.

Thanks to Melissa of It's Melissa's Kitchen for a great selection this week.  Check out her blog for the recipe, or look here on Dorie's blog.  And don't forget to check out the other TWD blogs! 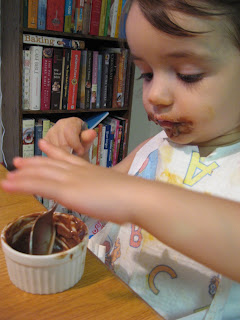