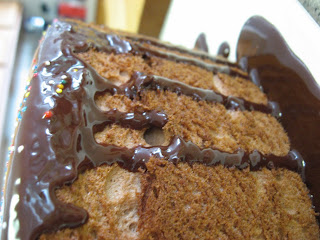 As a child, one of my favorite birthday cakes was angel food cake.  There was a period where you could buy different flavors of angel food cake mix, and my favorite was raspberry swirl.  My mom would make a delicious raspberry glaze to go with it (this was before I appreciated the combination of chocolate and raspberry).  I have no idea how I would go about replicating that cake.  Another one I liked was "Confetti Cake."  That one is a bit easier to reproduce--just quickly fold about a tablespoon of multicolor nonpariel sprinkles into the cake batter right before you put it into the pan.  The sprinkles melt into little bursts of color in the finished cake.
While I make lots of other cakes from scratch, it was a long time before I attempted angel food cake.  Who has that many egg whites just laying around?  Well, I do, now and then.  My favorite cheesecake and ice cream recipes use only yolks.  So whenever I have extra egg whites, I put them in the freezer.  I know I should freeze them in ice cube trays or something, so I know exactly how many I have, but I tend to just freeze then in batches of 4 or 6.  When I have several containers in the freezer, I know it's time to make cake.
Now that I think about it, I don't think I've ever made plain angel food cake from scratch.  That's because the first time I went looking for a recipe, I pulled out my copy of Rose Levy Beranbaum's Cake Bible.  The only recipe in there is for chocolate angel food cake.  Mmm.   That sounded fantastic, and I've never tried another recipe.  It's not super-chocolatey like a regular chocolate cake, of course, but it's got a nice flavor and best of all, it's not too sweet.
One of the things I love to do is make birthday cakes for my co-workers.  I take requests or try to find something that I think the person will like.  One of the ones I'm really enjoyed was the cheesecake with a brown sugar-pecan crust that I made for a co-worker who was on a gluten-free diet.  (Rose Levy Beranbaum's cheesecake, actually; it doesn't have any flour in it.) Anyway, last year, I made this chocolate angel food cake for K's birthday.  She said it might be her all-time favorite cake.  (Until I brought in pieces of Dorie's Peanut Butter Torte--she said that might have changed her mind.)  Well, sadly, K is leaving us to go to another position with the company, so I wanted to make her a farewell cake.  And of course I immediately thought of this one, since I know she loves it.  She's a reader of my blog, so this way she can try making it herself if she wants to.  =) 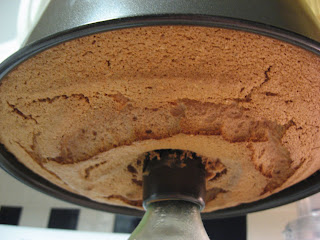 Chocolate Lover's Angel Food Cake
(adapted from The Cake Bible by Rose Levy Beranbaum)
1 ounce (1/4 cup + 1 tablespoon) unsweetened cocoa powder (Rose calls for dutch-processed cocoa, but I used Scharffen Berger natural cocoa)
2 ounces (1/4 cup) boiling water
2 teaspoons vanilla
12 1/4 ounces (1 3/4 cups) granulated sugar
3 1/2 ounces (1 cup) sifted cake flour
1/4 teaspoon salt
17 ounces (2 liquid cups; about 16) large eggs whites (I only had a bit over 15 ounces)
2 teaspoons cream of tartar
Preheat the oven to 350 degrees F.
In a medium bowl, combine the cocoa and boiling water and whisk until smooth.  Whisk in the vanilla.  Set aside.
In another medium bowl, combine 5 1/4 ounces (3/4 cup) of the sugar, the flour, and the salt and whisk until blended.
In the bowl of a standing mixer fitted with the whisk attachment, beat the egg whites until frothy, then add the cream of tartar and beat until soft peaks form.  Gradually beat in the remaining 7 ounces (1 cup) of sugar, beating until very stiff peaks form when the beater is raised slowly.  Remove 1 heaping cup of the egg whites and place it onto the cocoa mixture.
Dust the flour mixture over the remaining whites, 1/4 cup at a time, and fold it in quickly but gently.  A large balloon whisk works well for this step.
Whisk together the egg white and cocoa mixture and fold into the batter until uniform.  Pour the batter into a 10-inch tube pan and run a small metal spatula or knife through the batter to prevent air pockets.  Bake the cake for 40 minutes, or until a cake tester inserted in the center of the cake comes out clean and the cake springs back when lightly pressed. (The center will rise above the pan while baking and sink slightly when done.  The surface will have deep cracks like a soufflé.)
Invert the pan, placing the tube opening over the neck of a wine (or other long-neck) bottle to suspend it well above the counter, and cool the cake completely in the pan. 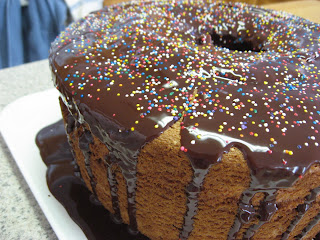 Chocolate Glaze
(adapted from Baking Illustrated)
1/2 cup heavy cream
2 tablespoons light corn syrup
4 ounces bittersweet chocolate, chopped (I used El Rey 58.5%)
pinch of salt
1/4 teaspoon vanilla
Place the cream, corn syrup, chocolate and salt in a microwave safe bowl.  (I use my 2-cup Pyrex measuring cup for ease in pouring later.)  Heat on 50% power for 2 minutes.  Whisk until chocolate is completely melted and mixture is smooth.  Stir in the vanilla.  If the glaze is very thin, let it cool at room temperature until it is slightly thickened.  Pour over the top of the cake, allowing the glaze to run down the sides.  Decorate with sprinkles if desired.