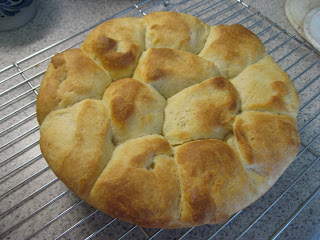 I really enjoyed making the Brioche Raisin Snails, but I still had to figure out something to do with the rest of the dough (see the previous post for the dough recipe).  I thought about just making a loaf, as Dorie suggests in the recipe for the brioche dough, but that really wasn't what I was in the mood for.  I flipped through several of my cookbooks, but nothing jumped out at me.  What I wanted was rolls.  So I decided to go for simple pull-apart dinner rolls.
I weighed the dough when I divided it (I only needed half for the snails), and each half weighed about 20 ounces.  I thought 12 rolls would be a good number, but I didn't want to deal with thirds of ounces, so I converted it to metric and each roll ended up being 48-50 grams.  =) Have I mentioned that I love my kitchen scale?  I rolled each piece into a ball and placed them all in a 9-inch round cake pan (9 around the outside and 3 in the middle).  I covered the pan with waxed paper, and since the oven was still a bit warm inside from baking the snails earlier, I put the pan in there so the dough would rise.  I left it for an hour, and when I checked on it, the rolls had completely filled the pan.  I preheated the oven to 400 degrees (the temp recommended in a number of roll recipes) and when it was ready, I baked the rolls for 20 minutes.
The end result?  Wow.  You definitely don't need anything for these, especially butter!  =)
Posted by Di at 9:57 PM