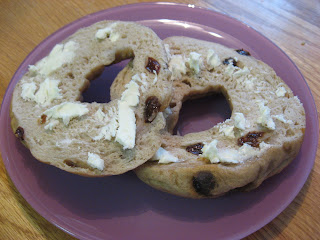 So a few weeks ago, I read that Nikki of Crazy Delicious decided to start a new blogging event, Master Baker.  For the inaugural challenge, she chose cinnamon as the theme ingredient.  I thought about participating, but nothing that I thought of making really sounded appealing. And with the deadline looming, I figured there was no way I'd come up with a good idea in time.
After taking a break from my bagel making adventures for the past couple weekends, I figured it was time for another go at it.  Sunday morning is my best time for something like this, since Jamie is home to help wrangle the kids.  I was trying to decide what new variation to try this time, and then it hit me.  Cinnamon raisin bagels!
I did a bit of looking at various recipes online, trying to determine how much cinnamon to add. The recipes varied widely--anywhere from 1 teaspoon to 1 1/2 tablespoons for 4-5 cups of flour. I started by adding 1 teaspoon to the flour in my mixer bowl, but decided to up it to 1 1/2 teaspoons.  I also decided to increase the flour from 3 1/2 cups up to 4 cups, in yet another attempt to make dough that would actually sink when I put it in the simmering water.  (No, it still didn't work.  I had one that started to sink for a minute but then it popped back up to the top.)  I went for 3/4 cup (4 ounces) of raisins.  I used a fresh box so they would be moist, but since I had boiling water left over from making tea, I poured some over the raisins and let them plump for a couple minutes.  I added the raisins to the mixer bowl for the last minute of kneading.  Next time I think I'll add them sooner so that they'll be a bit more evenly distributed.  I transferred the dough to a bucket to rise, and spent a few minutes distracting Gillian while Jamie and Brianna played Go Fish.  =) 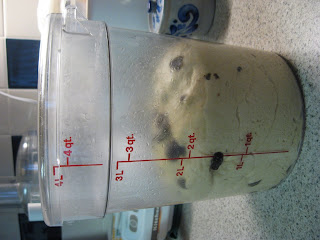 Once the dough was risen enough, I dumped it out onto the counter to divide it up into my usual 8 bagels.  I knew that the raisins would increase the weight, but I didn't take into account the extra flour.  I probably should have made 9 or 10 bagels this time.  As it was, I ended up with somewhat enormous mutant bagels.  Mutant because I also didn't take into account how much harder it would be to shape rings with raisins poking out all over the place.  Maybe I should have stuck with the lesser amount of flour--I think it would have been easier to deal with the raisins in a wetter dough.  And that was when I realize that the raisins weren't exactly evenly distributed.  Oh, well.  Live and learn.  After boiling the first two bagels, I cut the time down to 2 1/2 minutes per side instead of 3 in an attempt to keep the bagels from getting quite so big (they expand a lot while they're simmering).  Then I just barely managed to squeeze all eight of them onto my baking sheet. 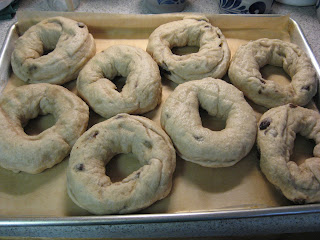 They turned out great!  Jamie thought that the amount of cinnamon was just right.  And the extra flour turned out to be good--the bagel texture was a bit chewier than my last couple batches.  And then there's the fact that the house smelled fantastic while the bagels were baking!
Cinnamon Raisin Bagels
(adapted from the DB June 2007 challenge, found here)
1 gallon water
1/4 cup packed light brown sugar

canola oil
The dough rises quickly, so I started off by adding the gallon of water to my biggest pot and putting it on the stove to bring it to a boil. Once the water started boiling, I added the brown sugar and just turned it down to a simmer. I also started preheating the oven to 400 degrees F, and I oiled my dough-rising bucket with a bit of canola oil. I pulled out a large baking sheet and lined it with parchment paper. If your raisins are dry (or you just want to), you can plump them up a bit. I placed them in a small heat-proof bowl and covered them with boiling water. I let them soak for a minute or two (you can leave them for longer if you think they need it), then drained them on paper towels.

I put the 1 1/2 cups of water in a 2-cup Pyrex measuring cup and microwaved it for one minute to heat the water. I stirred in the sugar and yeast and set it aside for a couple of minutes. Meanwhile, I put 1 1/2 cups (7.5 oz) of bread flour in the bowl for my mixer and added the salt and cinnamon. I used the paddle attachment and set the mixer to stir to combine the two, and then added the liquid. Once things were blended, I started to add the other 2 1/2 cups (12.5 oz) of flour a spoonful or two at a time. Once the dough started to come together, I stopped the mixer and switched to the dough hook. I kneaded the dough for 4 minutes with the speed set to about 2. Then I added the raisins and kneaded for another minute. I used a rubber spatula to scrape the dough into my prepped bucket and turned the dough around a bit to coat it with oil.

Once the dough doubled in size, I turned it out onto a lightly-floured counter. I used my dough scraper to cut it into 8 equal pieces (4.5 to 5 oz each). I rolled each piece into a long rope, joined the ends together and placed it on the parchment-lined pan to rise a bit. I had to work a bit harder to stick the ends together, since the dough was drier. Some of the raisins tried to escape, but I just poked them back in.

Once I had 4 or 5 pieces formed into bagel shapes, I put the first couple into the water. I ended up going with 2 1/2 minutes on each side and then transferred them to a kitchen towel on the counter to rest. The others went into the water in two batches of three each. Once all of the bagels were boiled, I put them back on the parchment-lined baking sheet.

Into the oven they went. I baked them for 25 minutes, then flipped them over and put them back in for another 10 minutes. The cinnamon makes the whole house smell incredibly good toward the end of the baking time. The really hard part is waiting for them to cool enough to eat.