Beware the Ides of March... 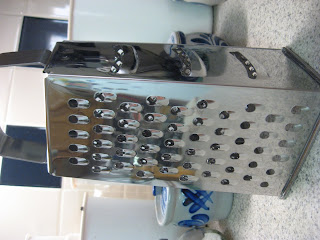 ...or at least sharp objects.  To be honest, while I'm just getting a chance to write about this now, I actually had my run-in with the box grater Thursday night.  (I was very sad that I couldn't find time to do something for Pi Day, so I had to come up with some sort of silly post to compensate for it.)  I recently bought a new grater, since my old one died (it wasn't very sturdy to start with).  I was prepping ingredients for another batch of scones that I planned to make early Friday morning to take to work.  Since I'd read several suggestions to grate frozen butter to incorporate with the dry ingredients, I thought I'd give it a try.
Did I mention that my grater is new?  So I'm not entirely used to it, and boy is it sharp!  The sort of sharp where when you cut yourself on it, it doesn't actually hurt at first.  So there I was standing in the kitchen, asking my husband to get me a band-aid and thinking, "gee, shouldn't this hurt a lot?"  And then it did, especially since I grated the side of the knuckle on my thumb.  My next thought was something along the lines of, "How incredibly annoying!  I have a ton of baking to do this weekend (brioche, anyone?), and it's going to be a pain to do it with a bandaged thumb."
Fortunately, I realized that there's no shortage of waterproof bandages in this house, as long as I don't mind Princesses!  =)
(And the scones turned out fine.  =)  I substituted cinnamon for the nutmeg and added about 3/4 cup of raisins.  Yummy.) 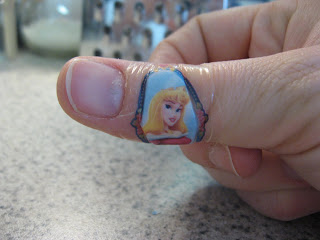