Rolling into the holiday season 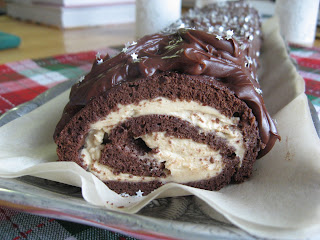 Yay!  I'm finally on vacation and getting caught up on some of the things I haven't done for the past few weeks.  Blogging is high on that list.  So are Christmas shopping and baking.  I should actually be baking right now, since tomorrow is the last day of school before break, and there are teacher treats to be made.  However, when I thought that I would have lots of time in the kitchen while the plumber was here this morning, I didn't consider the fact that he'd have to turn off the water for some of the repairs.  (Nothing serious, just little things that we don't want to turn into bigger things, and that J didn't want to tackle.)  I'm too messy to even thing about doing anything in the kitchen without being able to wash stuff (including my hands).

So this is the perfect time for me to tell you about a fabulous dessert that I made for a holiday potluck a couple weeks ago.  Right when I was trying to decide what to make for the party, I picked up a magazine full of Chocolate Desserts (one of the newsstand-only issues from Cook's Country).  It had lots of yummy ideas in it, but the one that really caught my eye was the Chocolate Roulade. 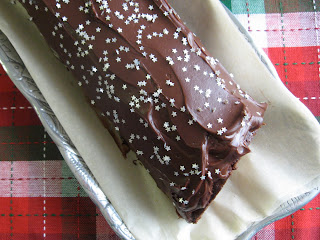 A roulade is something rolled up, which in this case is a cake.  You often see them this time of year--pumpkin versions for Thanksgiving, and chocolate versions as Yule Logs.  Crazy as it may sound, I'd never actually made one before!  You bake a large, thin layer of sponge cake, turn it out onto a cocoa-dusted towel while still pretty warm, and roll it up (towel and all).  Once the cake has cooled some, you unroll it, add a layer of filling, then roll it back up (which is easier because it was already rolled up once).  You can finish the cake with a simple dusting of powdered sugar or go all-out with a rich coating of chocolate ganache.

As with almost everything I've made from the folks at America's Test Kitchen, the roulade turned out great.  The recipe recommends making the ganache (chocolate, cream, butter, and a bit of cognac) first, since it needs time to firm up.  The filling can be mixed up next (mascarpone cheese, cream, instant espresso powder and some powdered sugar) and stashed in the fridge until you need it.  The cake bakes quickly, so it's good to have everything else done first.  I learned a couple things while making this recipe.  One is that you really need to make sure that your towel has a lot of cocoa powder rubbed into it, or the cake will stick.  Thankfully, the ganache will cover any imperfections, and the towel was easier to wash out than I expected. =)  Also, be prepared to dirty almost every bowl and whisk you own.  This was one time when I really wished that I had an extra bowl for my stand mixer.  But it worked out okay in the end. 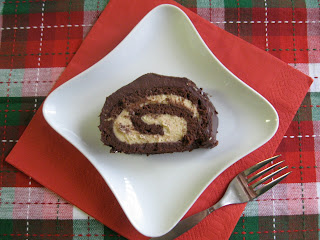 The verdict?  I think it's safe to say that this one was a hit.  After sampling the scraps from the ends I cut off, Brianna's first question was, "So are you going to save some of it for us?"  When I told her that the whole thing would be going to the party, her response was, "But you can make another one for us, right?"  I think Jamie won't mind at all if I do. =)  Gillian wasn't a huge fan of the espresso flavor in the filling, so I'll have to see what I can come up with for next time.  Everyone at the party really seemed to enjoy it as well.  One warning--the recipe says that it serves 8 to 10, but those would have to be pretty big slices, and this is a very rich dessert.  We fed a lot more than that.

If you'd like to try this recipe for yourself, you can find it here if you have a web membership for Cook's Illustrated.  If have a copy of Baking Illustrated, it's also in there.  And of course you can find the recipe in the same place where it caught my eye--the recent Cook's Country Chocolate Desserts issue.  (If you're wondering about the stars on top, they're from King Arthur.)