Until we meet again (soon!) 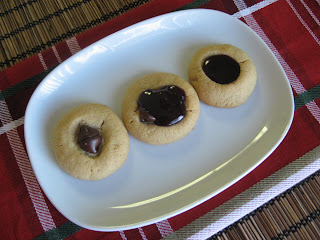 I posted at the end of last week that I've been blogging for four years now.  I wasn't entirely sure how to begin.  I started by just posting some of our favorites, and assorted things that I decided to make.  So not that much different from what I do now. =)  That got me through the first month or so.  Then I decided to be brave.  After reading this post from Peabody, I decided to join a fairly new baking group called Tuesdays with Dorie.  At the time I thought I was crazy, but it's one of the best things I ever did. I've learned to bake lots of amazing things, and made some fantastic friends. 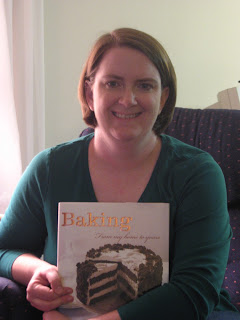 In the beginning, I participated almost every week.  Over time, other things (work & family being two of the biggest) claimed more of my time than they used to, though I still tried to keep up.  For the past couple months, I've still been baking a lot of the time, but haven't always had the time or felt the inspiration to write.  And now, after four years, we've come to the end of the book.  Don't worry, you'll continue to see Dorie recipes here on my blog, since there are some that I haven't posted that I want to.  Not to mention the fact that Dorie has written other books.  But more about that in a bit. 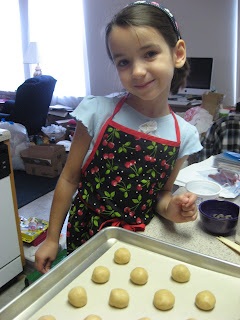 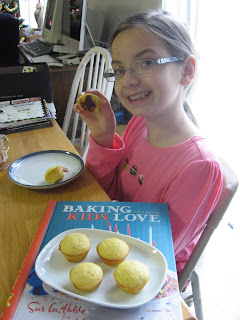 I was looking through some of my earliest blog posts and was amazed to see how much my girls have grown.  When I started all this, Brianna was about the age that Gillian is now.  Wow.  After getting a new baking book for Christmas, Brianna made us breakfast (mini corn muffins) on Monday pretty much all by herself.  I have to say, it's quite a change to be just a coach when you're used to being the baker.  I promised Gillian that she could help me with the TWD recipe, fittingly the Kids' Thumbprints.  She helped me measure things on the scale and add them to the mixing bowl.  When the dough was done, she helped me shape it into balls and did most of the thumbprints.  Her only complaint was that she doesn't really like peanut butter. =) 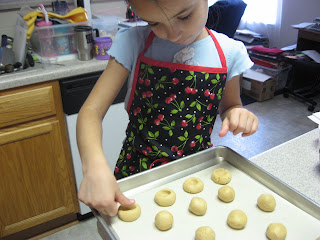 We mostly followed the recipe as written.  I did chill the dough for a bit after it was made, since it seemed kind of soft.  To make sure the dough balls were all the same size, I used my #70 disher to portion the dough, which we then rolled between our hands to form smooth balls.  We filled most of the cookies with a couple big chocolate chips, but left a few empty to be filled with raspberry jam after baking.  A handful of cookies ended up with both when I discovered that I had a little jam left over.  The size of cookies we made took 14 minutes to bake.  We did skip the chopped nuts on the outside of the cookies; I knew there was no way the girls would even consider eating them that way. 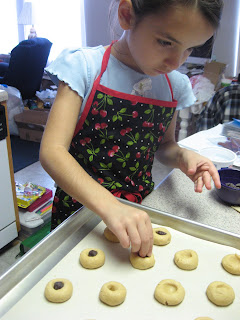 The verdict?  Well like I said, G doesn't like peanut butter, so she isn't a huge fan of the cookies.  B thought that they were okay, but nothing great.  Fortunately, Jamie liked them a lot.  And I'm sure I'll be able to find a home for any extra cookies.  I was surprised to find that I preferred the jam ones.  I think it's because the chips didn't melt to fill the thumbprints (which makes sense, in retrospect).  If I make these again, I'll used chopped chocolate instead of chips, or just fill the holes with ganache after baking.

If you'd like to try the recipe, you can find it in Baking From My Home to Yours, of course.  For this final week of this incarnation of TWD, Dorie herself is our host and will have the recipe up as well.  If you're not currently a member of Tuesdays with Dorie, membership in the group will be opening up again very soon.  The next book will be Baking with Julia.  I've had a copy of the book for a long time, but haven't really baked from it.  I'm hoping that this will be the push I need to pull it off the shelf.

I'm sure there will be lots of participants this week, so be sure to check out all the Links! 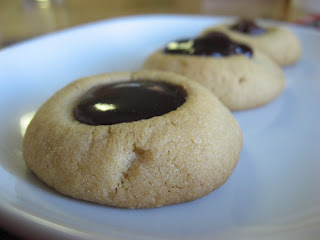