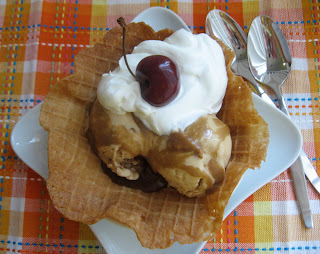 So what do you think makes a sundae a sundae?  Is it just having sauce on ice cream?  Is it adding whipped cream?  Is it the cherry on top?  Well, I have all of those today, so there's no doubt in my mind that this is a sundae. =)  I don't eat sundaes much.  I usually eat a single scoop of ice cream, plain, in a small bowl or ramekin.  Eating a small amount means I can get away with eating ice cream more often.  Occasionally I'll put some chocolate or caramel sauce on top.  But whipped cream?  Never.  And cherries?  I don't even like them. Jamie got to eat the one on this sundae; he's the one who bought the cherries in the first place, so I can make him some ice cream with roasted cherries. 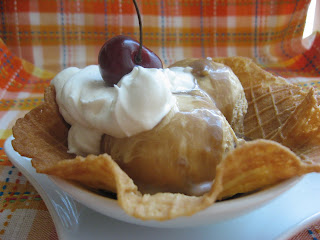 But since this is Sundae Sunday, I went all out.  At the base is a waffle bowl, made from the same recipe as my cones, but sandwiched between a couple small bowls to give it shape.  The ice cream is salty caramel with pecan pralines.  (You can also find the salty caramel ice cream recipe in this Bon Appetit blog post. Thanks, Mike!)  It's topped with a sinfully sweet butterscotch sauce and topped with softly whipped cream and a cherry.

I added the pralines to the ice cream because I wanted something that wasn't too plain, and I thought they would be good with the caramel ice cream.  Initially, I was thinking of using hot fudge or some other chocolate sauce for the topping, but then I decided that I wanted to stick with the caramel theme.  Regular caramel sauce seemed too obvious; I wanted something with a little more character.  I consulted my bookshelf on Eat Your Books, looking for butterscotch sauce.  I was a bit surprised when it pointed me to my copy of Ratio, by Michael Ruhlman.  But sure enough, there was a butterscotch recipe in there.  Butter, dark brown sugar, cream, salt, vanilla, and the intriguing ingredient of cider vinegar were fairly quickly combined into a delicious topping.  As for the whipped cream, I made it by hand--I've finally learned that the best way to do that is to use a large bowl and my big balloon whisk, even for a relatively small amount of cream.  The whipping goes fast that way, and I can easily stop before the cream gets over-whipped. 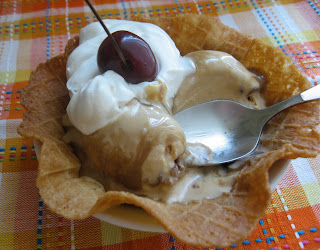 The verdict?  Wow.  This sundae was totally decadent, and completely delicious.  I let the caramel for the ice cream get a little too dark, so the ice cream wasn't very sweet.  But that was okay with the pralines and sauce, both of which were quite sweet.  I don't usually go for nuts in my ice cream, but I like how the pecans were crunchy, while the praline coating melted into the ice cream.  The butterscotch sauce was wonderful--the additions of vinegar and salt really gave it an excellent flavor.

Place the butter and brown sugar in a small heavy-bottomed saucepan.  Cook for 5 to 10 minutes over medium heat until the sugar has completed melted into the butter and the mixture is thick and bubbly.  Remove the pan from the head and whisk in the cream.  Let the mixture cool slightly--about 5 minutes--then whisk in the vanilla, vinegar and salt.  Makes about a cup.

For more info on making the butterscotch sauce, check out this article from Shuna Fish Lydon, with great how-to photos.

And be sure to check back later this week for my Sundae Sunday round-up! 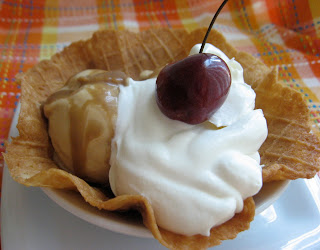