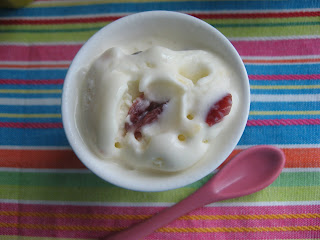 Happy Independence Day, everyone!
This is a day to be thankful for all the freedoms that we enjoy as Americans.  I'm also thankful to have working air-conditioning here in central Texas, where it's supposed to be over 100º for the next week.  I came home from work on Friday to find that the temperature in my house was over 80ºF.  Turns out that after almost 10 years (can we really have been in this house for almost 10 years?!), the air-conditioner condenser unit had had enough.  Why do things like this always seem to happen going into a holiday weekend?  Which leads me to the next thing I'm thankful for--a wonderful heating & a/c guy who was willing to come out on a Saturday to figure out what was wrong and fix it.  Otherwise, I'd probably be spending my holiday weekend in a hotel. =)  I haven't appreciated air-conditioning so much in a long time.  (J says it got into the high 80s in the house while I was at work on Saturday, before the a/c was fixed.)
I felt like a big wimp, complaining so much about the lack of air-conditioning.  After all, we didn't have a/c when I was growing up.  It was fairly hot and humid in Pennsylvania in the summer, and I can remember plenty of nights when we would lay in bed at night with all the windows open, just hoping for some breeze.  But as several people pointed out to me, it may have been hot then, but we didn't have high temperatures over 100º for days on end.  The ways we try to beat the heat are still the same, though--fans, minimal cooking, and lots of frozen treats!  I admit it, I let my girls eat popsicles for breakfast on Saturday morning. =) 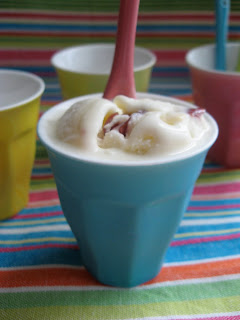 Today, though, I've got more ice cream for you.  My Ice Cream Week is running over the week-long time frame by a bit (and there's at least one more post to come), but you can never have too much ice cream, right? =)  Today's flavor happens to fit the patriotic theme for the day--red and white in the ice cream, though I had to find a blue dish for it to complete the theme.  (You could probably add blueberries; I just don't like them.)
When I first got my copy of Jeni's book, I read all the way through it.  Then I went back and started a list of the flavors that I wanted to make.  It didn't take me long to fill a page in my notebook.  Some of the choices were obvious ones, like the Salty Caramel and Darkest Chocolate in the World.  The Roasted Strawberry Buttermilk one was high on the list as well, since I had a ton of strawberries in the fridge.  Brianna asked me to make the Milkiest Chocolate in the World, since she wanted to try it when we were in Columbus, but they were out of it.  What surprised me was the recipe that ended up next on my list.   Young Gouda Ice Cream with Vodka-Plumped Cranberries.  Cheese in ice cream?  I really like Gouda--and cranberries--so I figured, why not? 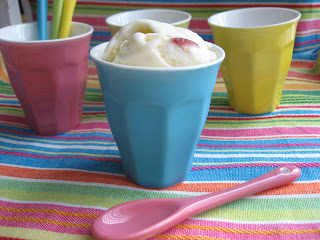 The verdict?  I admit, I wasn't quite sure what to expect from adding cheese to ice cream.  I did figure that the creaminess of the Gouda would work out okay.  What I ended up with was something that reminds me a lot of cheesecake.  I guess that shouldn't be that surprising.  It's really good, but really rich.  The tart cranberries are a nice contrast to the richness and creaminess of the ice cream.  Now I'm eager to experiment with some of the other unusual recipes in the book.
If you'd like to give this one a try for yourself, I recommend that you get your hands on a copy of Jeni's Splendid Ice Creams at Home.  To get started, you can find the recipe for Jeni's Vanilla Bean ice cream here at Food & Wine.  To make the gouda version, omit the vanilla bean.  Increase the salt to 1/4 teaspoon and the corn syrup to 2 tablespoons.  After whisking the milk mixture into the cream cheese, whisk in half a cup (about 2 ounces, or 60 grams) of young Gouda or another creamy cheese.  Proceed with chilling the mixture and churning it.  Dried cranberries are plumped in simple syrup with a couple tablespoons of vodka added.  They're layered in with the ice cream as it's packed into a freezer container.
Stay tuned for my next Ice Cream Week post, on ice cream cones! 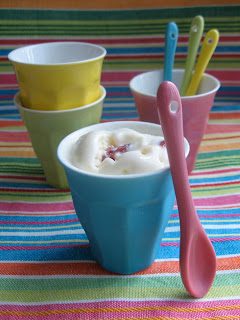