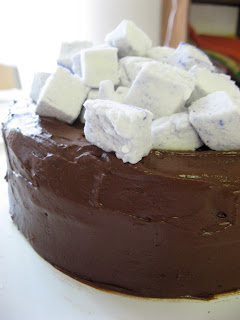 The past several days have been interesting.  Gillian has been totally out of control.  I guess that's what happens when you've just turned four.  =)  I think she may have finally crashed.  I certainly hope so, since she's been bouncing off the walls for days.  That also means that she hasn't been napping much and has been getting up too early, so she's been cranky when she hasn't been silly.  Her birthday was Thursday (the 14th), but her party (a small one) wasn't until today, so she's had four days of excitement.  I don't think I can take any more... 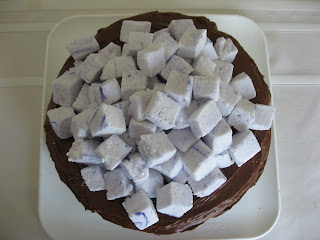 I made cupcakes for Gillian's actual birthday, which was pretty easy.  (post coming soon)  But I was undecided on what cake to make for her birthday party.  The only real requirements were chocolate cake and chocolate frosting.  A few days ago, I was chatting with people on Twitter before I had to go to work, and Caitlin mentioned that she was thinking of making a cake this weekend.  The one she had in mind was the Hot Chocolate Layer Cake that was on the cover of Fine Cooking back in January of this year.  I remembered seeing it when I got my copy of the magazine, and thinking that it looked pretty amazing.  Fudgy chocolate cake with shiny chocolate frosting and an impressive pile of homemade marshmallows on top.  Both my girls love marshmallows, so I wasn't surprised that Gillian gave her approval when I suggested it as the cake for her party.  It looked like a bit of a production, but I knew I had the weekend off and would have time to make everything.
I made the various components on Saturday.  First up was the marshmallows, in the morning.  I've only made them once before, with mixed success.  This recipe was a bit different though, and just used a bunch of gelatin without any egg whites.  The ingredient list is pretty short--water, gelatin, sugar, corn syrup, a bit of salt and some vanilla.  Oh, and a bunch of powdered sugar for coating sticky edges.  My only addition was some gel food coloring, in an attempt to make the marshmallows a swirly purple color.  I used my pizza cutter to cut the finished slab of marshmallow into individual pieces, which worked quite well. 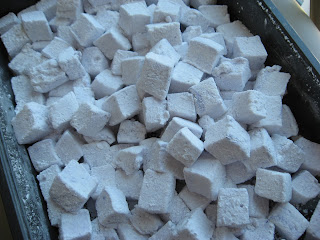 hard to see the purple under all the powdered sugar
The cake layers and frosting didn't get done until Saturday night.  I decided we didn't need an enormous cake, so I only made two-thirds of each recipe so we'd have a two-layer cake.  The recipes were pretty easy to reduce accordingly, and both are pretty easy to mix up.  I love that you don't need a mixer to make the cake.  You make a "hot chocolate" mixture by heating together water, butter, oil and bittersweet chocolate until the butter and chocolate are melted.  Then you mix in sugar, flour and cocoa powder (natural, which I prefer), and finally you whisk in buttermilk, vanilla, baking soda and salt.  Since baking soda is the sole leavening (and starts working right away), it's a good idea to get the batter in the pans and the pans in the oven as quickly as possible.  I baked my layers for about 25 minutes.
The frosting can be started while the cake layers bake.  The recipe calls for a vanilla bean, but I was lazy and just used vanilla sugar and some vanilla extract.  You heat cream and butter until the butter is melted.  Then you whisk in sugar, cocoa powder, golden syrup, and salt, continuing to heat until everything is smooth and dissolved.  The frosting mixture then goes into a 13"x9" pan to chill in the fridge overnight.  I did the final assembly this morning.  You take the chilled frosting mixture out of the fridge and put it in your stand mixer.  First you beat it with the paddle attachment to loosen it up, then you whip it with the whisk for a few minutes.  The result is a shiny, luscious chocolate frosting.  Once the cake is filled and frosted, you pile marshmallows on top.  And then you hope you have lots of friends to share it with, because even with only two layers, this cake is huge. =) 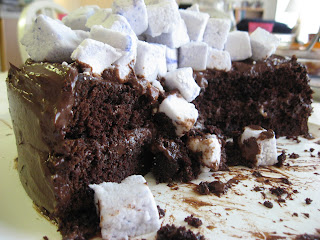 The verdict?  Well, I think it's safe to say this one was a hit.  The only complaint that I heard was that the cake was so rich that it was hard to eat very much of it.  It's also a bit hard to cut neatly, as you can see.  I think chilling might help with that.  Even though I didn't need more than half of them for the cake, I still made a full batch of marshmallows.  Brianna and Gillian are definitely looking forward to eating the rest of them.  The marshmallows are a bit soft for my taste (I have texture issues), but I'll definitely be making them again.  As for the cake, overall, it was pretty easy to make, which makes me happy.  I just need to figure out how to adjust things (mostly the leavening, I think) so that I end up with more even cake layers.  Mine ended up higher at the edges than in the middle.  Also, the cake by itself is a little bland, but I think a bit more salt would help that, and maybe a little espresso powder.  It's amazing with the frosting, though--a great combination.
If you'd like to try this one for yourself, you can find the recipe here on the Fine Cooking website.  (Last I checked, it was available to everyone, not just subscribers.)  It takes some time, but can be broken up into stages, and the end result is definitely worth the work.
And last but not least, a couple pictures of the birthday girl.  I can't decide which is my favorite. 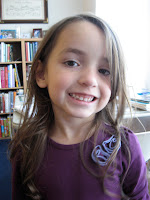 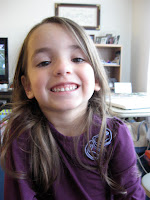