LiveSTRONG with a little heart 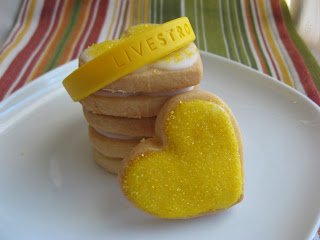 Today is LiveSTRONG Day 2010.  October 2, 1996 was the day that Lance Armstrong was diagnosed with cancer, at the age of 25.  I can empathize a bit.  For me, 1996 was the worst year of my life.  On January 22nd, my husband Nate died of cancer.  On February 21st, I turned 25 years old.  It sometimes seems like, in a heartbeat, my life was turned upside down.  I think that's the case for most people whose lives are touched by cancer.  Whether you're the one with the disease or the one on the sidelines, life will never be the same, even if you manage to beat it.  So the question is, how do you deal with it? 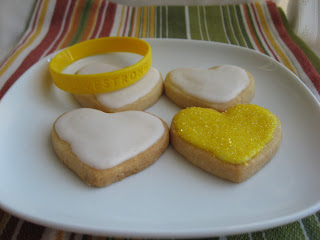 I was lucky enough to have a couple of very good friends living nearby in Seattle (where Nate and I lived at the time).  But even so, I'm not the sort of person who usually shares a lot of my feelings with people.  It was hard talk to my friends, to deal with the grief.  So I pretty much didn't.  I had myself convinced that I was fine.  Up until the point where I had no choice but to accept that I was anything but fine.  It pretty much took getting physically ill myself before I realized that I couldn't deal with everything on my own.
During the eight or nine months when I thought I was doing okay, a grief counselor from the hospice contacted me periodically.  I told her that I was fine, more than once.  But she kept calling every so often.  And ultimately, I'm really glad she didn't give up on me.  Because when I really needed someone to talk to, I remembered her calls.  And the fact that one of the things she'd told me about was a support group for young widowed people (now part of The Healing Center).  It was incredibly hard to get myself to go the first time.  But it was so worth it.  It was so difficult to talk to my friends and family about how I was feeling that I didn't realize it might be easier to talk to strangers.  Because they might have been strangers at first, but they had all been through similar losses.  They got it.  And they helped me get through it.
I guess what I'm trying to say is that whether you're a family member or the one with cancer, it's okay to admit that you might need some help.  And that the support doesn't have to come from the ones closest to you.  When Nate was going through treatment, he didn't talk to me about a lot of his feelings.  But I knew that he was talking to other people.  I was hurt by that.  I didn't understand until much later that it was probably too hard for him to talk to me about everything, that it was easier for him to talk to people with a little more distance from the situation.
Help can come from a lot of places.  One of them is the Lance Armstrong Foundation. 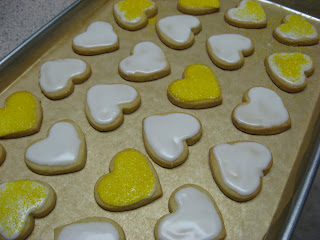 This post is my contribution to the LiveSTRONG with a Taste of Yellow event organized by Barbara of winos and foodies.  This is the fourth year she's hosted this event, and the third time I've participated.  You can find my previous entries here (Nate's story) and here.  Each year, one of the requirements is to include a yellow food in your post.  This year, Barbara also requested that we include a heart.  So I made  heart-shaped lemon shortbread cookies, decorated with yellow sugar.  I definitely recommend that you read Barbara's post for today.  She'll also have a round-up of Taste of Yellow posts sometime in the next week or two.
Lemon Shortbread
(adapted from The Fannie Farmer Baking Book)
16 tablespoons (2 sticks; about 225g) unsalted butter, softened
3/4 cup (85g) powdered sugar
zest of 1 lemon
1 teaspoon vanilla extract
1/2 teaspoon salt
2 cups (250g) unbleached all-purpose flour
Preheat the oven to 350ºF.  Line a baking sheet with parchment paper.
In a large bowl, beat the butter until smooth, then beat in the sugar, lemon zest, vanilla and salt.  Stir in the flour.  The dough will come together in to a ball.  Flatten the dough into a disc, then wrap in plastic and chill for about an hour.
On a lightly floured surface, roll the dough out until it is about 1/2 an inch thick.  Cut the dough into shapes with a small (about 2-inch) cutter.  Gather the scraps together and reroll the dough to cut additional cookies.  Place the cookies about 1 inch apart on the prepared baking sheet.  Bake for about 20 minutes, or until the cookies are just beginning to brown.  Transfer them to a rack to cool.
To glaze the cookies, whisk together a cup of powdered sugar (about 115g) and a tablespoon or two of lemon juice to make a thick glaze.  Spread the glaze on the cooled cookies using the back of a spoon.  Decorate with sprinkles or colored sugar if desired.  Allow the glaze to harden completely before storing the cookies, or they'll stick together.
Yields about 2 dozen cookies. 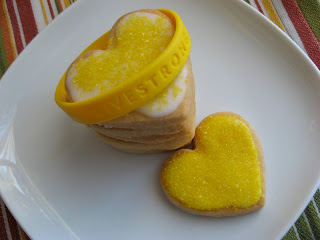