The apples don't fall far from the tree 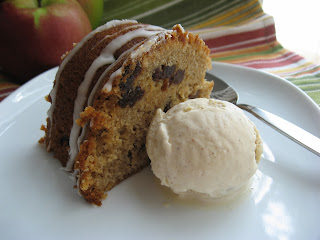 I didn’t realize how good we had it with Brianna in the sleep department. Oh, of course there were issues when B was a newborn. And we went through the annoying stage after she moved out of the crib where she would come back down the stairs repeatedly every night--just because she could. But for the most part, she was a pretty sound sleeper. She still is--not much wakes that child up. If she calls for me in the middle of the night or (even more rarely) shows up at the side of my bed, it’s because something is seriously wrong. In that respect, B is definitely my child. Sure, I have that “sleeping with one ear open” thing that most moms develop, but aside from that, I usually sleep pretty soundly.

With Gillian...well, it’s completely different. I swear, for the first month of her life I never got to sleep lying down for more than 20 minutes at a time. And certainly not in my own bed. Her crib was in our room, but to avoid bothering J, who is a light sleeper (why yes, that would be where Gillian gets it from) we spent a lot of time downstairs in the living room where the pack-n-play was set up. Not that she really slept there. Whenever I’d try to lay her down and stretch out on the couch, it was like she knew. Within ten or fifteen minutes at most, she’d wake up and start crying. And this is my child who doesn’t eventually give up--she can keep it going for quite some time, no problem. So we slept in the recliner a lot. It was either that or not sleep. Life is just like that with an infant, sometimes.  She eventually got better about sleeping, most of the time, anyway. Even now, we seldom go more than a few weeks without a middle-of-the-night appearance by Gillian. And she’s not subtle about it--she just flings open the door to our bedroom. “Mommy!!” Always mommy, never daddy. *sigh* (And yes, J does try to help. It’s never done any good.)

The latest thing? It seems that Gillian has mostly given up napping. Oh, they still have nap time at daycare, and we have it at home on the weekends (it’s rest & reading time for B). But G doesn’t sleep. She plays, or pretends to sleep. She even tells me that she takes a nap. But when I ask her if she slept or if she just rested, usually the answer is “well maybe I just mostly rested.” All in all, it makes for some very cranky evenings in our house. And cranky dinner table scenes, where Gillian is too tired to eat her dinner, but wants dessert. “Can I have some of that apple cake?” “No, sweetie.” “But I want apple cake!!” “Well, sweetie, you can’t have it, because you haven’t eaten dinner and because we don’t have any more.” “BUT I WANT IT!!!”    **beating my head against the kitchen table** 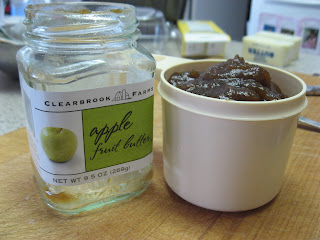 The apple cake in question?  That would be this week's Tuesdays with Dorie recipe, Double Apple Bundt Cake.  Lynne of Honey Muffin is our host this week.  This was a perfect choice for the beginning of October, as lots of new crop apples are arriving at my favorite store.  I went with my favorite, Macintosh.  The second apple referred to in the recipe title is apple butter.  One of these days, I'll have to try making my own.  For this cake, though, I picked up some wonderful apple butter at Central Market.  (It's from the company that makes my favorite raspberry fruit butter. Mmm.)

The cake batter is pretty straightforward to make.  You cream together butter and sugar, then beat in eggs.  Next up is grated apple and the apple butter.  Then come the dry ingredients--flour, salt, baking powder, baking soda, cinnamon, nutmeg and ginger.  The recipe calls for adding raisins and nuts.  I skipped the nuts, since I knew Brianna and Gillian wouldn't like them, so I increased the raisins.  I ended up baking my bundt for 45 minutes.  Once the cake was cooled, I drizzled it with a milk/powdered sugar glaze. 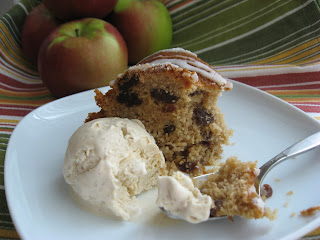 The verdict?  Well, as you probably already guessed, Gillian was a big fan.  Brianna, on the other hand, wasn't as happy.  She doesn't really like raisins in baked goods, and I think she's tired of all the spices.  I enjoyed it (I love most apple things), but will make a few changes next time.  The cake was rather sweet, and increasing the raisins made it more so.  I'd like to try it with the nuts, or maybe sub dried cranberries for some or all of the raisins.  (Thanks for the idea, Amy!)  Also, as soon as I added the glaze, I wished I'd gone with something different.  I think the salted toffee glaze from David Lebovitz's wonderful plum cake would be excellent with this cake.  One thing I am glad I thought of was the ice cream I had with some of the cake.  Brown sugar cinnamon ice cream.  Mmm.  (Post with recipe coming soon, I hope.)  I definitely plan to make this again, so I'll have a chance to play around with it.
If you'd like to try the cake for yourself, head on over to Lynne's blog.  To see what everyone else thought of this week's recipe, check out the Links.  And for some savory Dorie recipes, be sure to check out French Fridays with Dorie. 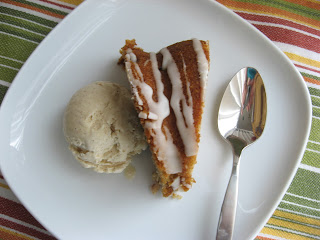