Time to make the doughnuts...again 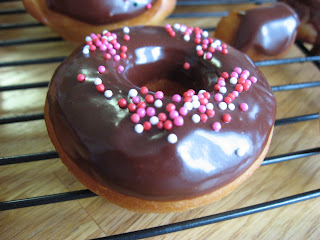 Besides Sunday mornings when I was a kid, the other time in my life that I most associate with doughnuts is college.  I didn't eat them that often then, but it was always a bit of an event.  There was a great place that we went to, usually very late at night when we were stick of studying and doing homework.  It was an event because it was a bit of a drive, and usually a whole bunch of us would pile into a car or two and go together.  As far as I know, the place was open during the day, too, but I only ever went there once in daylight, and that was at 7am. =)   They had just about any sort of doughnut you could want.  One of the most popular was doughnuts (no hole) split in half and filled with glazed fresh fruit, that varied with the season.  They often had strawberry, which was a favorite with a lot of people.  Just once or twice, I remember them having peach, which was fantastic.  But my usual picks were cinnamon sugar doughnut holes (granulated sugar, not powdered) and a tiger tail--I love twisty doughnuts of all kinds.  But I have to admit, doughnuts are one of the things that I've been kind of scared to attempt at home. 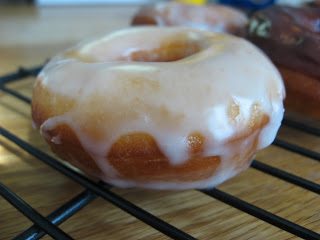 The last time (the only time) I made doughnuts, they didn’t turn out as well as I’d hoped they would.  That's probably why it's taken me two years to try again. =)  They were reasonably tasty when just made, but ended up rather greasy as they cooled. I tried to get away with a smaller amount of oil and a regular pan, and it was just too hard to keep the temperature steady. This time I did things the way I should have before. I used my enameled cast iron Dutch oven (about 6 quarts in volume; 5 inches deep), so I knew once it got hot, it would retain the heat pretty well. I also used the whole bottle of oil (48 ounces/1.5 quarts), figuring I could strain it and reuse it if this worked out. I got out my digital thermometer that connects to a display that sits on the counter and is easy to read. I was set.

The other thing I needed to figure out was the dough. Last time, I probably should have stayed away from a brioche-type dough that was sticky and difficult to work with unless it was very cold. Fortunately, I had a good idea for what to try this time around. One of my favorite cookbooks right now is Peter Reinhart’s Artisan Breads Every Day. And within that book, one of my favorite recipes is the All-Purpose Sweet Dough that he uses for all sorts of sweet breakfast treats--cinnamon buns, sticky buns, fruit-filled rolls and a delicious crumb cake. It was one of the doughs he demonstrated for us at the class I went to back in January. It’s quite versatile, and it makes a lot of dough, so you can use part of it for one thing and the rest for another if you want.  (I used the rest of mine to make a cinnamon swirl loaf--no raisins--that B would actually eat.) 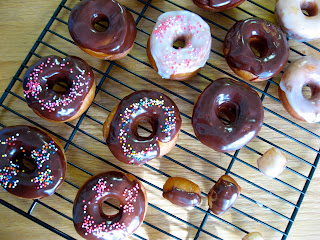 The dough is easy to make, though you do have to plan ahead just a little bit since it gets an overnight rise. First, you mix instant yeast with warm milk and let it sit for a couple minutes to get the yeast going. You don’t absolutely need to do that with instant yeast the way you do with active dry, but it’s nice to give the yeast a bit of a head start when dealing with an enriched dough. Meanwhile, you can mix together the dry ingredients--all-purpose flour, sugar, and salt. I do this directly in the bowl of my stand mixer. Then you add the yeast/milk mixture to the flour mixture along with some melted butter (or oil, if you prefer) and stir to combine. At this point, I attach the bowl to the mixer and let the dough rest for a few minutes. Then I knead the dough with the dough hook. The dough should eventually come together in a smooth ball; the sides of the bowl should be clean, but the dough may stick a bit at the bottom.  Once kneaded, the dough goes into an oiled container (I use a 4-liter food storage container) and goes into the fridge for the night.

The morning after I mixed up the dough, I took the dough out of the fridge and cut off a piece that was about 500g.  I rolled it out on a lightly floured counter until it was about half an inch thick.  Then I cut out doughnut shapes.  I used a 2-1/2 inch round cutter for the outside and a 3/4 inch one for the middle.  I got 8 or 9 on the first pass.  I gathered the scrapes, rerolled, and got several more, ending up with a dozen all together.  I put them on a parchment-lined sheet pan, sprayed them with oil, and covered them with plastic wrap.  Then I let them rise until they warmed up and got quite puffy, about an hour. 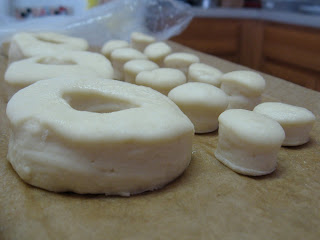 Once the doughnuts looked like they were almost risen enough, I started heating the oil.  I was aiming to keep the temperature at about 360F.  I fried the doughnuts 3 or 4 at a time (and did a batch of holes, too).  I adjusted the gas to keep the temp from going below 350F (it dropped when the doughnuts went in) and from getting above 370F.  It worked out pretty well.  When the doughnuts were golden brown on one side, I flipped them and did the other side.  I didn't really keep track of the time, but it was 1-2 minutes per side.  The finished doughnuts went onto a cooling rack set over a paper bag topped with paper towels to drain.  Once they cooled a bit, I dipped one side in glaze (some chocolate, some vanilla) and topped some with sprinkles (since B and G love sprinkles).  =) 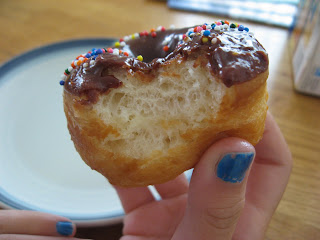 I love how the blue sprinkles coordinate with B's blue nail polish. =)
The verdict? These were a huge hit with my girls. And I can’t lie, I really enjoyed them as well. The dough was tasty but not too sweet. The chocolate glaze turned out really good, especially considering that I was making it up as I went along. =) We will definitely be making these again. Not too often, since I hate having to clean up after frying stuff, but these were worth it.

Want to try these for yourself? For starters, make a batch of the All-purpose Sweet Dough (found in the recipe for Cinnamon Buns).  The glaze was pretty simple.  I mixed a couple cups of powdered sugar with a tablespoon of corn syrup and enough water to make a thick glaze.  Then I divided it in half.  One half got about half a teaspoon of vanilla.  The other half got an ounce of melted bittersweet chocolate.  I had to add a bit of extra water to the chocolate one to get a glaze that was fluid enough for dipping.

Next time I really want to try twisted doughnuts.  And I need to find a good cake doughnut recipe to make cinnamon sugar ones.  Any suggestions?  And what's your favorite type of doughnut?

Oh, and these doughnuts have been Yeastspotted! 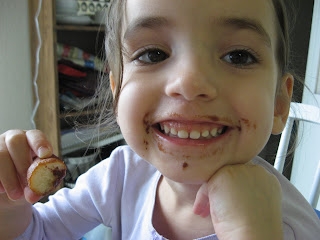