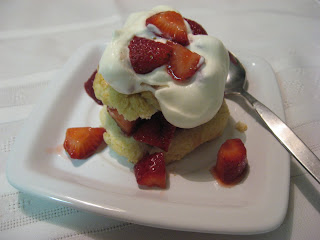 I'm probably dating myself, but who else had a Strawberry Shortcake doll (when they were first popular)?  I had Strawberry and Apple Dumplin'.  My sisters had various other dolls.  Brianna doesn't have any of the dolls, but she has a number of Strawberry Shortcake books.  They're a parent's worst nightmare.  Don't believe me?  Then you try reading one aloud some time! =)  Here's a sample:

"When Strawberry Shortcake visits Seaberry Beach, she daydreams about a little mermaid named Pearlberry who wants to live on land more than anything in the world.  A Berry Fairy offers to make Pearlberry's wish come true--but only if Pearlberry promises to leave her home in the ocean forever."

Lots of berry this and berry that, and crazy character names.  And these things are long!  It makes me tired just thinking about it.  All I have to say is, thank goodness Brianna can now read them for herself.  And she actually enjoys reading to Gillian, too, which is good for both of them.  Not to mention it gets me off the hook at least some of the time. =)

Now one strawberry shortcake I don't have any trouble talking about is the one we made for Tuesdays with Dorie this week.  My awesome and funny blogging friend, Cathy of The Tortefeasor, picked Tender Shortcakes for us this week.  It's a wonderful choice for this time of year, with lots of fresh berries in the stores. 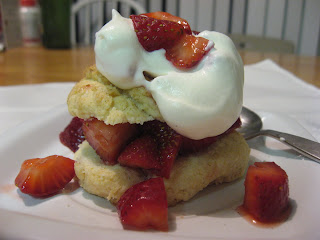 Several people noted on the P and Q that Dorie’s shortcakes must have been rather large, and that they reduced the recipe. I decided to cut it in half. One thing I’ve been doing recently is converting all my measurements to grams; it’s easier when measuring and adjusting recipe yields, since I don’t have to bother with fractions. I realized last weekend that I’ve finally gotten reasonably comfortable with metric measurements--I was watching a baking show on the Cooking Channel that used grams, and the measurements actually made sense to me. So what I ended up with was:

Shortcakes are basically biscuits, so they were quick to make. You whisk together the dry ingredients, then rub in the butter (I did it by hand; you could also do the whole thing in the food processor if you want), then add the cream and stir with a fork until the dough starts to come together. Then you knead it just a bit to bring it together the rest of the way. I used my #16 scoop (1/4 cup) to divide up the dough and ended up with 9 shortcakes.  I baked them for 14 minutes.

The only change I really made to the recipe (other than reducing it) was to substitute vanilla sugar for the granulated sugar. I love Dorie’s direction to rub citrus zest into sugar and have taken to doing that with vanilla beans as well. A few weeks back I did that with some sugar and then realized that I didn’t need it for a recipe. So I had a bunch of vanilla sugar on hand. I put some in the shortcakes, sprinkled some over the cut up strawberries, and used some to sweeten the whipped cream. 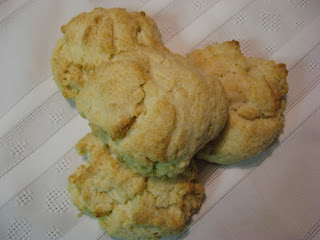 The verdict? Wow. This was a fabulous dessert. The shortcakes ended up being the perfect size. As several people commented, the biscuits are tasty enough to eat on their own, though the fruit and cream didn’t hurt. =) Mine didn’t taste strongly of vanilla, but it was a subtle presence in the dessert that was quite good. Everyone’s plates were quickly cleaned.
For the full recipe, head over to Cathy’s blog (plus she writes the most entertaining posts!). And be sure to check out the Leave Your Links page to see what everyone else thought of this week’s recipe. 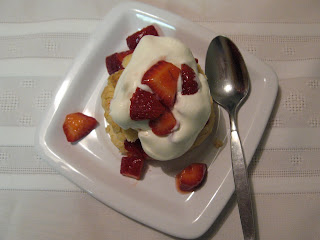