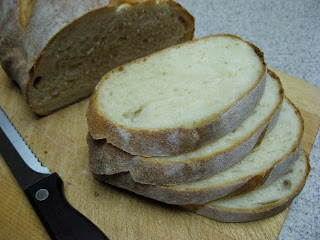 I mentioned in my last post that Brianna was sick last week and into the weekend.  I could tell when she was finally really feeling better--she actually ate all of her dinner on Sunday night.  But that's wasn't very surprising, since everyone else cleaned their plates as well.  Spaghetti and meatballs has that effect around here.  And Gillian is very proud of herself for the fact that she can pronounce it correctly (she's been working very hard at it).  =)  Italian dishes are always a hit around here.  And what better to go with a plate covered in tomato sauce than Italian bread?
Okay, to be honest, we didn't eat Italian bread with our spaghetti this week.  We would have, but I had just made some sourdough rye (yet another upcoming bread post), so we ate that.  But we did have Italian bread with our chicken parmigiana a few weeks ago when my Dad was here.  And it was fantastic.  It was next up for the BBA Challenge, perfectly timed.  I've made this recipe several times before, and it's always a hit.  I was kind of surprised when I looked through my archives and realized that while I took pictures, I never actually posted about this bread.  It's definitely time to remedy that. 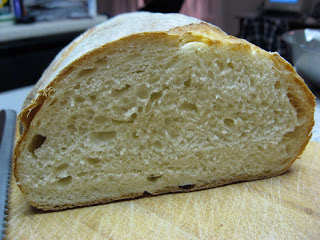 Since I've made this one before, and because I've been having so much fun playing with my sourdough starters, I decided to combine the two.  Italian bread is yet another of the breads that employ some sort of preferment to add flavor.  In this case, being Italian, it uses biga, which is a firm preferment consisting of flour, water and a small amount of yeast.  Conveniently, the percentage of hydration for the biga is pretty much the same as my bread flour starter.  So I substituted some of the starter for part of the flour and water, and omitted the small amount of commercial yeast.  I ended up using 3 ounces of my 67% hydration starter, 9 ounces of flour, and 6 ounces of water, giving me a total of 18 ounces and keeping the hydration at about 67%.  I let the mixture sit at room temperature until it almost doubled in size.  I don't actually remember how long that took, but I was going by the activity of the starter, not by the clock.  Once it was doubled, I followed the instructions for the biga, lightly degassing the dough and then putting it in the fridge overnight.
The next day I made the dough.  Having learned my lesson with the French bread, I started by cutting the biga into pieces (I usually just use my kitchen shears) and putting it in the bowl of my stand mixer with the water (6 ounces) and oil.  I stirred these ingredients together with the paddle attachment to start softening the biga.  Then I added the rest of the ingredients, switched to the dough hook, and mixed the dough until it formed a ball.  I kneaded it for a couple minutes in the mixer, then finished it by hand on an oiled surface.  I stuck the dough in my 4 quart bucket and let it rise at room temp for about an hour and a half (dough tends to rise fast in my kitchen).
As far as shaping goes, I decided I wanted to be able to use the leftover bread for toast and sandwiches, so I went for one really big loaf.  I shaped the full amount of dough into a batard shape.  I put it on a sheet of parchment paper on my peel, sprayed it with Pam (high heat version) and covered it with plastic to rise.  For hearth baking, I use my baking stone (preheated to 500F as directed) and put the bottom of my broiler pan on the floor of my gas oven.  When I put the loaf in the oven (parchment and all), I added hot water to the steam pan as directed and sprayed water in the oven as well.  I baked the bread for about 30 minutes total, rotating it and removing the parchment paper after 15 minutes.  I don't remember the exact time, but I went by temperature, taking the loaf out when it was over 200F. 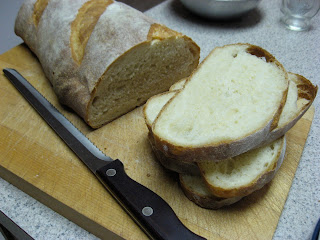 The verdict?  It was really hard to wait for the bread to cool before we tried it.  The five of us went through about half the loaf at dinner the night I made it, so I think it's safe to say everyone liked it.  =)  Brianna quickly requested that I save some of the remaining bread for her lunches.  The sourdough starter worked nicely in the biga--it didn't add sour flavor in this case, but just made the bread more flavorful in general.  I'm sure I'll make this Italian bread many times more.
If you'd like to try this recipe, I highly recommend getting your own copy of The Bread Baker's Apprentice.  Be sure to check out the BBA Challenge blogroll to see how everyone else is doing (we're all at different points in the book).  And head over to Yeastspotting to see this and many other wonderful yeasted creations.  Next up in the challenge--kaiser rolls! 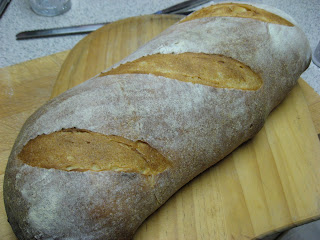