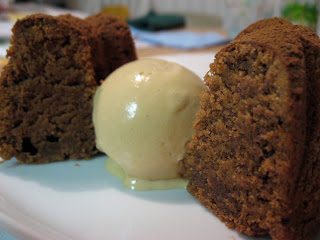 I've talked before about how my kids eat a lot of stuff that isn't typical "kid food."  That's a good thing--they're much more adventurous eaters than I was when I was little.  I can't take the credit, though, since I'm still rather picky.  My husband Jamie is the omniverous one.  I don't think either of my girls has met a chocolate dessert that she didn't like.  Both routinely request chocolate cake with chocolate frosting for birthdays, and they just finished eating chocolate pudding with lunch.  (Brianna has been sick and pudding is one thing that she'll pretty much always eat.  Plus it has calcium, so that's good, right?)  Even though milk chocolate is generally considered more "kid-friendly," we eat mostly dark chocolate around here.

So I was curious to see what the reaction would be to this week's Tuesdays with Dorie selection.  Our hostess this week was Kristin, aka The Queen of Quite a Lot, over at I'm Right About Everything.  Her pick was Milk Chocolate Mini Bundt Cakes.  I actually made this dessert Monday morning, but this has been a crazy week, so I'm posting about it more than a little late.  (Work has been nuts, and as I mentioned, Brianna has been sick for several days.)  The recipe is designed to be made in a mini bundt pan (6 small cakes).  I don't have one, so I decided to go with my two 3-cup bundt pans.  They weren't quite full, but it worked out okay.  The recipe is pretty straightforward--cream butter and sugar, beat in eggs, stir in dry ingredients alternating with milk.  At the end, melted milk chocolate is folded into the batter (I used El Rey, which is 41%).  My two small cakes baked for 25 minutes.  I pulled them out as soon as they appeared done, so they wouldn't end up dry. 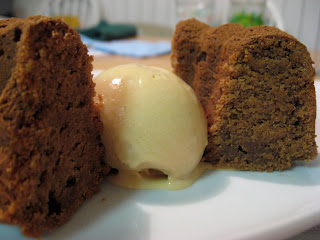 The next question was how to top them.  I heard from a lot of people that they had trouble with the glaze.  It's simply melted chocolate with some corn syrup whisked in (to maintain the shine, I assume).  I had problems with it, too.  As soon as I mixed in the corn syrup, the glaze thickened to the point where I knew I wouldn't be able to drizzle it.  So I played around with it, adding a bit more chocolate and thinning it with milk.  I eventually ended up with a thick chocolate sauce that I still wasn't thrilled with.  I stuck it on one of the cakes anyway and let Brianna and Gillian decorate it with sprinkles.  They were very excited to eat it when they were done sprinkling. =)

For me and Jamie, I decided to dress things up a little.  For the second cake, I skipped the glaze and simply dusted the cake with cocoa powder.  I then cut it into quarters and plated two of the pieces with some of the fabulous caramel ice cream that Nancy, Leslie and Tracey talked me into making last weekend.  The burnt sugar flavor of the ice cream was a very nice foil to the mild chocolate flavor of the cake. 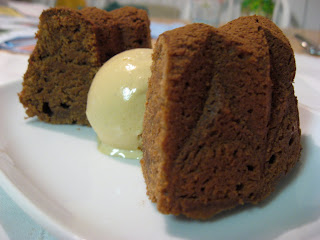 The verdict?  I really liked this cake.  It certainly doesn't scream chocolate, but it was really tasty.  It was wonderful with the ice cream.  Brianna and Gillian liked the glazed version a lot.  I would definitely like to make this one again, maybe adding the swirl or something else (I saw at least one person that added mini chocolate chips).
And I couldn't resist sharing this picture of my helper (Gillian), taken shortly before I discovered that she was chewing on my spatula.  One of these days she'll stop doing stuff like that.... 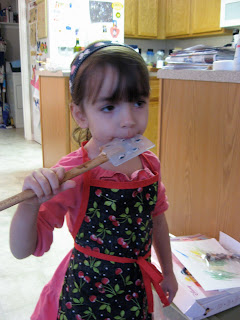 If you'd like to try this week's recipe for yourself, you can find the recipe in the book, of course, and also here.  If you'd like to try the ice cream recipe (and you should!), the recipe is at the bottom of this page.  Don't freak out when you see the quantity of egg yolks--it's totally worth it! =)  And the full recipe makes about 2 quarts of ice cream.  Finally, if you haven't already done so by now, be sure to check out what the rest of the TWD bakers did this week! 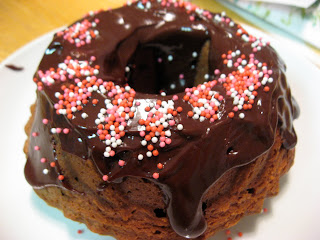