Two for the price of one 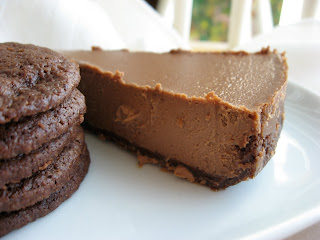 Oops.  My last TWD creation of 2009 is getting posted in 2010.  I made it on Tuesday and we sampled it on Wednesday, but I didn't get a chance to take pictures until Friday morning.  And here it is Sunday night and I'm still trying to finish this post.  Nice to know that the year is off to a good start. =P  My only excuse is that Jamie's parents have been here since last Tuesday, so I've been otherwise occupied.  In fact, I waited until they got here to even make this week's (last week's?) recipe so they could help eat some of it.  Margaret of Tea and Scones picked Dorie's Low and Luscious Chocolate Cheesecake for us to make this week.  It seems fitting, since we ended 2009 with a cheesecake as well. 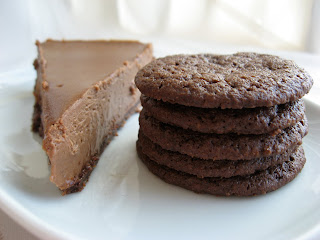 The recipe calls for a graham cracker crust, but I think a chocolate cheesecake just cries out for a chocolate crust, as well.  It worked out perfectly that my blogging buddy Nancy and I decided it was also time for another bake-along recipe from Alice Medrich's Pure Dessert.  For the first one, Nancy and I baked along with Sarah from Blue Ridge Baker to make Kamut Poundcake.  One of these days I'll actually get that posted...  This time, Nancy suggested that I pick something.  There are a number of things that I've been wanting to make, but we decided to go with something easy during the holidays.  You'd think I'd be totally sick of cookies after 12 Days of them, but we ended up making some delicious Cocoa Wafers.

The cookies were wonderfully easy to make.  You mix flour, good cocoa powder (I used Scharffen Berger), sugar, salt and baking soda in the food processor.  You pulse in butter, then add milk and vanilla.  You form the dough into logs and refrigerate them an hour or longer.  Then you simply slice and bake, making sure to bake the cookies long enough for them to become crisp as they cool.  Easy and delicious! 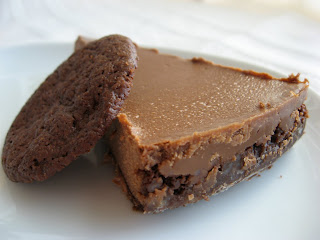 Fortunately, Nancy made the cheesecake before me, so I knew that 20 cookies would work nicely to produce the 1 1/2 cups of crumbs that I needed for the crust.  Next time I'll cut back on the melted butter, though.  I suspect the cocoa wafers have a whole lot more butter than your average graham cracker, and the crust ended up a bit greasy.  The sides slumped down a bit after baking the empty crust, but I was able to push them back up a bit.  And the crust was very soft but did firm up as it cooled.

Like the cookie recipe, the cheesecake batter was quick to mix up in the food processor.  You pulse together cream cheese, sugar, eggs, vanilla, a bit of salt and melted bittersweet chocolate (I used 70% El Rey).  A few people mentioned that the chocolate flavor was mild, so I decided to add a bit of espresso to pump it up.  I dissolved a teaspoon of instant espresso powder in a teaspoon of warm water and mixed that in at the end.  I was a bit surprised that the cheesecake wasn't baked in a water bath even though it didn't have any flour in it.  Usually flour (or some other sort of starch) is added to prevent curdling when the temperature isn't moderated by a water bath.  Then I realized that the difference must be the chocolate--all the cocoa solids in the bittersweet chocolate must be acting like flour (there are several references to this in Shirley Corriher's Bakewise).  I baked my cheesecake for 35 minutes, being sure to pull it out before it was all the way set.  If you wait until then, the cheesecake is usually over baked.  And sure enough, even though my cheesecake had a fair amount of jiggle to it when I took it out of the oven, as it cooled, it set up nicely.  It originally had a ring of puffed batter around the edge, but that settled as well, leaving me with a nice, even surface.  I chilled the cheesecake for about 24 hours before we ate it. 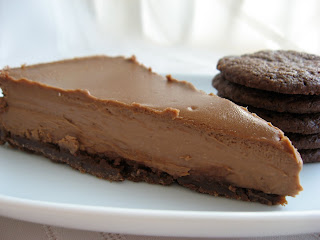 The verdict?  This is a very nice cheesecake.  The chocolate flavor was definitely on the mild side, but I think the espresso did help.  I think I'll actually use a lower percentage chocolate next time, probably around 60%, but maybe add more of it.  I rarely say this, but I think the cheesecake could have been a bit sweeter.  The cocoa wafer crust was actually my favorite part--it really added to the chocolate experience.  The cheesecake was definitely enjoyed by my taste-testers as well.  I can definitely see myself making this one again, with a bit more tweaking.

If you'd like to try the cheesecake recipe, head on over to Margaret's blog for the recipe.  You can find the recipe for the cocoa wafers and many other wonderful things in Pure Dessert.  I highly recommend getting your own copy, but you can also find the cookie recipe here. 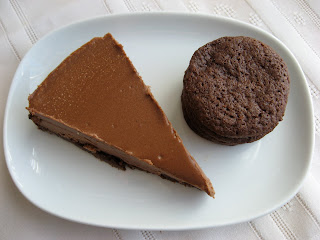