Two, but far from terrible 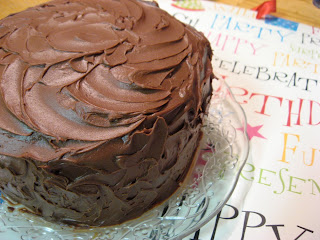 Just a week or so ago, I wrote about my 2nd blogiversary.  The early days of my blog weren't that exciting, as I was trying to figure out what the heck to write about.  But at the beginning of February (2008), I read a post on Peabody's blog about this cool new group that she'd joined called Tuesdays with Dorie.  A couple days later I got myself a copy of Baking From My Home to Yours and signed up for the group.  I was pretty well convinced that I was crazy to join a weekly baking group. =)  But I can't begin to say how glad I am that I did.  I've made lots of wonderful desserts and lots of wonderful friends.  It's hard to believe that this group has been going for two years now!  Last year, we celebrated with a pick from Dorie herself.  This year, Laurie came up with the idea to vote on a recipe to make.  We actually ended up with two options, Tarte Tatin and Cocoa-Buttermilk Birthday Cake.

The variety of recipes we've made over the past two years has also led me to increase my collection of baking equipment.  One thing I still don't have, though, is a cast iron skillet.  (I really need to do something about that one of these days.)  Unfortunately, that's one of the best pans for making Tarte Tatin, and I don't own anything that would work well.  I will make the tarte at some point, but not this week.  That left me with chocolate cake.  I actually made it for Gillian's birthday in October (though with a different frosting), so I knew it would be good.  For the cake, I did get to use pans that I acquired for a previous TWD recipe--my 6" cake pans.  Their inaugural use was for Bill's (not so) Big Carrot Cake.  I knew we didn't need a great big cake to eat, since we're still recovering from all the holiday sweets.  And luckily, we had extra mouths to help eat the cake as well, since Jamie's parents were here.  I halved the ingredients and made the cake as directed, including the optional melted chocolate, and just adjusted the baking time slightly for the smaller pans.  This time I used a sour cream-based chocolate frosting that is a dream to work with.  I went for simple decorating this time, but it does pipe extremely well, too. 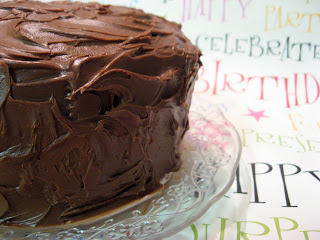 The verdict?  It's no surprise that everyone enjoyed this cake, since we've had it before. =)  And it was nice that we had extra family here to share it with.  Both my girls love the chocolate-chocolate combo, so they were very happy to see this for dessert.  My favorite part was actually the frosting I used--it has a great flavor and texture.

You can find the recipes for both the cake and the tarte by heading over to Laurie's blog.  Here's the recipe for the frosting I used:

Place the chocolate and butter in a small microwave-safe bowl.  Microwave for 1 1/2 to 2 minutes on 50% power, then stir the mixture until the chocolate melts completely.  Set aside.

In a medium bowl, whisk together the sour cream, powdered sugar, salt and vanilla until smooth.  Whisk in the chocolate mixture and continue mixing until the frosting is smooth and creamy. 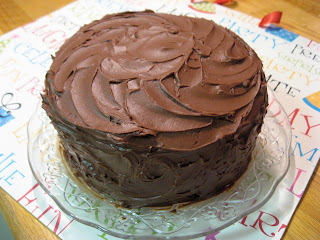 Be sure to check out the creations of all the other great TWD bakers.  And here's to another two years (or longer) of yummy baking!