A jumble of good stuff 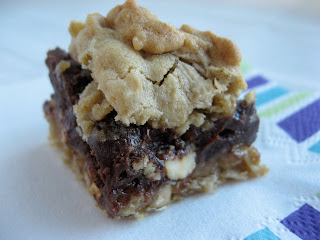 When I was a kid, my mom thought nothing of throwing us in the car and driving to my grandparents' house for the weekend.  It was only about a three-hour drive.  I have lots of good food memories from sitting in Gramma's kitchen.  It was even better when there were other people there, too.  One of my favorite people to see was my Aunt Maureen.  She and I share a birthday, nine years apart.  (My mom was the oldest and Aunt Maureen the youngest of seven kids.)  Aunt Maureen liked to bake (still does, as far as I know).  And I think she may be responsible for my tendency to eat baked goods for breakfast.   Not that she let us kids have any, but we saw her doing it.  =)

As I was making this week's TWD recipe, I was reminded of one particular thing that I recall her baking (and eating early in the day).  I can't remember the exact time frame, but it had to be sometime in the 80s.  There was a box mix for something called Jumbles, which consisted of a brownie-ish layer with dollops of oatmeal stuff on top.  They were really good.  And hey, with oatmeal, they qualified as perfectly acceptable breakfast fare, right? =) 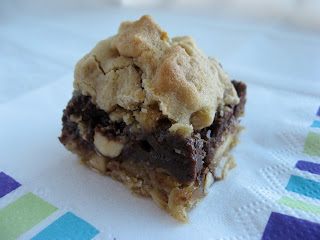 This week's pick is from Lillian of Confectiona's Realm.  The title of the recipe is another mouthful--Chocolate Oatmeal Almost-Candy Bars.  I made half the recipe, so I went with an 8" square pan.  To make my life easier, I lined the pan with non-stick foil.  The bottom layer is an oatmeal cookie-like dough, with nuts added.  The recipe calls for peanuts, but I substituted cashews.  Since I know that I don't really like cinnamon and chocolate together, I left the cinnamon out of the oatmeal mixture.  You reserve some of the dough for topping, and press the rest into the pan.  For the middle layer, you melt together sweetened condensed milk, chocolate chips and a bit of butter and salt.  Once that mixture is whisked smooth, you add raisins and more nuts.  After spreading the chocolate on top of the oatmeal layer, the reserved oatmeal dough is dolloped on top of the chocolate.  I ended up baking the bars for 25 minutes.  I let them cool until room temperature before sampling.  Dorie mentions that they're good cold, but I haven't tried them that way yet.

The verdict?  Very good, but hard to eat much at once.  I cut the bars small and still had a hard time finishing one.  I enjoyed them a lot, though.  I love raisins with chocolate, so I'm not surprised that I liked the middle layer.  And the oatmeal was a nice contrast with the chocolate.  I'm not always a big fan of nuts in my desserts, but I liked the cashews, too.  Brianna and Gillian both seemed to like these, too.  (Though as usual, Gillian liked them more.)  I figured it would take us forever to eat even the half recipe I made, so most of the bars went to the daycare and B's after-school teachers.

If you'd like the recipe, head on over to Lillian's blog.  And be sure to visit some other TWD bakers to see how they did this week! 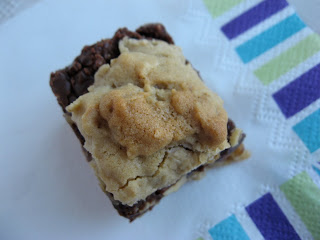