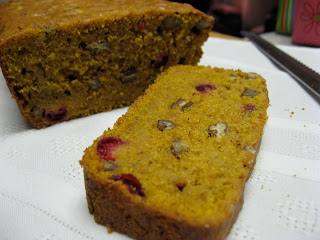 So the Thanksgiving meal that I cooked today was actually the second one that I had this year.  I've certainly has more than one Thanksgiving in the past.  One of the most memorable was the first year I was living in Seattle, when my first husband Nate and I had three Thanksgiving dinners in 3 days.  I didn't even want to look at turkey for quite some time after that. =)  All the meals were quite good, just too much.

This year's was a bit different.  Brianna has the days before and after Thanksgiving off from school, so on Tuesday they offer traditional Thanksgiving fare in the cafeteria for lunch.  Parents are always welcome to eat lunch with their children, but are specially invited for that day.  And while Brianna almost always takes lunch to school with her, that's one of the few days when she actually buys lunch.  Last year it was easy, since I was on vacation the whole week of Thanksgiving.  This year, I had to work the whole day (8:30am til almost 8:00pm), so it was a bit more challenging.  But I was able to make it work by taking a slightly longer than usual lunch.  The food actually was okay--turkey in gravy, stuffing, mashed potatoes, green beans, cranberry sauce, a roll and apple crisp for dessert.  But I swear, I probably consumed well over my recommended intake of sodium for the week in that one meal.  I think the salty gravy must be intended to cover up the rather bland potatoes. =)  But it was worth it because Brianna was so happy that I came to eat lunch with her.  And that's what Thanksgiving is all about, right?

The other nice thing that the school does each year is prepare Thanksgiving treats for all the teachers and staff.  Members of the PTA collect baked goods from everyone in the car line in the morning (repeated requests for donations, either homemade or store-bought, go out to all the parents for several days before that).  Then they wrap them up and distribute the items randomly to the teachers.  Last year, I was able to help with the whole process.  This year, I couldn't be there to help, but I figured I could at least contribute some good stuff. =) 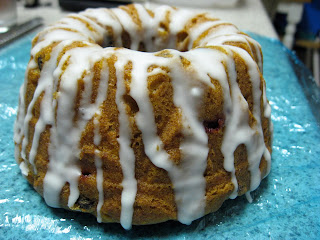 One thing I learned last year was that it would be better to bring several small things than one big cake.  There's always that worry that not enough items will be collected to give something to everyone.  I decided to make this week's Tuesdays with Dorie recipe, the All-in-One Holiday Bundt Cake, but in smaller versions.  The recipe was selected by Britin of The Nitty Britty.  I thought it would be a good choice because it has a little something for everyone--pumpkin, apples, cranberries and pecans.

I ended up making the recipe twice.  For the first batch, I used all the ingredients listed in the recipe.  I did make a change with the apple, though.  Instead of dicing it, I shredded it on the large holes of my box grater.  Then I squeezed a bit of the juice out of it before adding the apple to the batter, since I didn't want the cake to be soggy.  I put the batter in two 8 1/2 x 4 1/2 inch loaf pans, and baked them for 55 minutes.  We cut into one loaf, and I saved the second for the teachers.  It turned out good, but as I expected, Brianna and Gillian weren't excited about the nuts.

So for round two, I left out the pecans.  At Brianna's request, I added chocolate chips in their place. =)  I also increased the amount of cranberries, since it seemed like there weren't enough in the first batch.  In between the two baking sessions, I had the chance to visit Sur la Table and get a couple of mini bundt pans.  They're three cups each in volume, so I used both of them plus a couple of my mini loaf pans.  I baked them all for 35 minutes.  Once the bundts had cooled, I drizzled them with a simple powdered sugar/milk glaze.

The verdict?  I liked both of the versions, but preferred the one without nuts.  The chocolate chips were actually a nice addition.  The apple didn't stand out at all, but it did add a little something.  I was quite happy with the texture and moisture level of the cakes.  I took the rest of the loaf that we sampled work with me.  It disappeared quickly, so I guess my employees it was good. =)  Hopefully the teachers who received my goodies will enjoy them.  I would definitely make this one again, maybe playing around a bit more.  And I can't wait to try some more recipes in my new pans!

If you'd like to try this one, head over to Britin's blog for the recipe.  And check out the TWD blogroll to see what everyone else made this week. 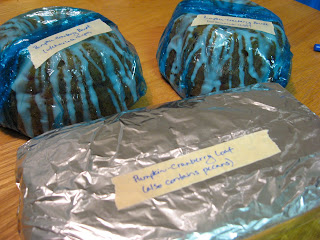