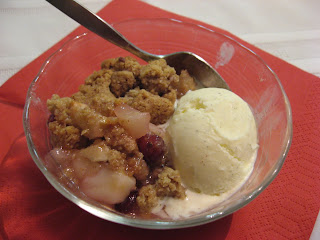 I realized recently that I might have a problem.  It seems that I've become dependent...on my kitchen scale.  The biggest clue was a couple weeks ago when my scale started acting crazy, and I started going through withdrawal. By crazy, I mean that I would put something on it, and the scale would say that it either weighed nothing, or weighed 8 pounds.  Not good.  At first I thought it was just that the batteries were dying.  So I figured out what kind of batteries to get (and where to find them, thanks Nancy).  I went out the next morning and got some, came home, figured out how to get the old ones out, and put the new ones in.  I held my breath as I placed a handy mug on the scale, watched the display, and sighed in disappointment as it once again registered over 8 pounds.  I had to face facts--the scale was broken.  Now what?

I tried to make one recipe without it.  I had to use a dry measuring cup for flour.  I don't remember the last time I didn't weigh flour.  It was enough to send me running for the computer to investigate new scales immediately.  I have an online subscription to Cooks Illustrated, and quickly found a report on scales.  I discovered that since I bought my scale, OXO had come out with one.  It had all the features of my scale, with some cool additions.  I've liked all of the other OXO tools that I've acquired (like the rolling pin I love), so I decided to give it a try.  I scouted online for places to buy one, and went out and got it.  Okay, not exactly.  It's worth noting that the scale comes in two versions--5 pounds and 11 pounds.  First I bought the smaller one at Target because I was able to run in and pick it up on my way to work.  My thought was that I never make batches of dough that are more than 4 or 5 pounds.  What I didn't think about was the fact that you have to take into account the weight of the bowls, too.  One of my favorite bowls is glass and weighs at least a couple pounds...  So I figured out where to get the other one, went and bought it, and returned the smaller one.  Total elapsed time from when I first noticed the problems with the old scale until I had the new 11-pound one? Less than 48 hours, even with all the drama.  Like I said, I think I have a problem.  =) 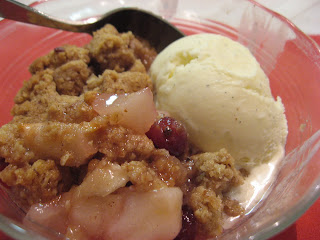 By now you're probably wondering, what does all this have to do with this week's Tuesdays with Dorie recipe?  This week's recipe is Cran-Apple Crisp, chosen by Em of The Repressed Pastry Chef.  It's very straightforward to make, using the food processor to combine the ingredients for the topping.  Flour, oats, brown sugar, pecans (since I despise coconut), cinnamon, ginger, nutmeg (because I love nutmeg), butter, and salt (because I tasted the topping and thought I forgot the salt--turns out there isn't any in the recipe?!).  My usual method is to put a container on my scale and add the ingredients, taring the scale after each one.  The recipes in the book don't include weights, but I've had success using a weight of 4.5 ounces for each cup of all-purpose flour.  For other ingredients, I use tables in a couple of my cookbooks  that give weights for common baking ingredients.  I've found brown sugar listed as either 7.5 or 8 ounces per cup.  I split the difference, going with 1 7/8 ounces for a quarter-cup.

After I prepared the topping, I cut up apples (using up three Jonamacs that were sitting in my fruit drawer, along with one Macoun), tossed in fresh (frozen) and dried cranberries, and added some vanilla sugar (I cut it back to 1/2 cup, or 3.5 ounces), a bit of flour, and a pinch of salt.  I put the fruit in my oval gratin dish, added the topping, and baked the crisp for 45 minutes.  The recipe says to let the crisp rest for about 20 minutes if you make a single large dish, but we didn't wait that long.  The crisp was definitely on the juicy side because of that, but the juices just mingled nicely with the vanilla bean ice cream that I had made to go with it.

The verdict?  Jamie and I really enjoyed the crisp.  I love apples and cranberries together, and fruit crisp is a favorite of mine.  It makes an excellent breakfast, and the filling thickened up a bit as it cooled overnight. =)  But as we were eating it the night I made it, something seemed off with the texture and taste of the topping.  Hmm.  Then I figured out what it was.  Remember my note about the weight of the quarter cup of brown sugar?  Even better than deciding what weight of sugar to use would have been noticing that the recipe call for half a cup of brown sugar...  Good news is, the crisp was still quite good.  And when I make it again, I think I'll add more of the sugar, but maybe not the full amount.

If you'd like to try this one for yourself, with the correct amounts of ingredients, head over to Em's blog for the recipe.   And check out the TWD blogroll to see what everyone else made this week.  Laurie has given permission for us to post the recipes out of order this month, so there are several tasty things out there for your viewing pleasure. 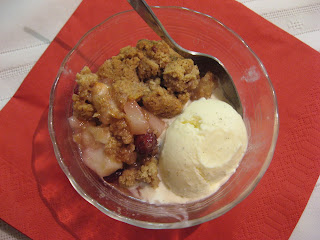