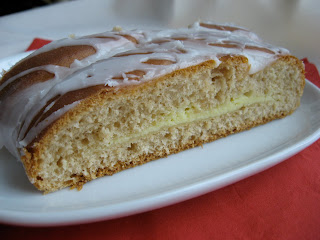 I've been in some sort of a blogging slump lately.  I've been baking, and even taking some pictures, but haven't been writing much.  I've even been having a hard time participating in the blogging events that I usually enjoy a lot.  So I'm trying to shake myself out of it.  Work has been crazy, but I don't want that to bring me down anymore.  Kids have been crazy, but hey, what else is new? =)  The holidays are here, bringing with them lots of fabulous cooking magazines, both regular November and December issues and some holiday newsstand specials.  This is the perfect time of year for blogging--in fact, I'm coming up on my second blogiversary very soon.  Hard to believe I've been at this that long!!

One thing that I'm looking forward to is the next round of Adopt-a-Blogger.  If you're a veteran blogger, please consider signing up.  I know Kristen always gets lots of newbies wanting help, so more experienced bloggers are always needed.

It's also been a while since I participated in Magazine Mondays.  But the above mentioned stack of magazines has inspired me.  In particular, something from the December 2009 issue of Bon Appetit caught my eye.  I used to subscribe to Bon Appetit, but stopped several years ago because I wasn't enjoying the magazine all that much anymore.  But that was before I started blogging and talking to other bakers via Twitter.  A couple months ago, I picked up an issue, based on comments from some of my tweeting friends.  I was pleasantly surprised at how much I enjoyed it (the October 2009 issue).  For one thing, some of the articles are by authors I recognize and like a lot, such as the wonderful Dorie Greenspan.  And Peter Reinhart (breads in the November issue).  In fact, I decided to start subscribing again to save myself some money. =)

Anyway, where was I going with this?  Oh, right, the December issue.  Dorie's column jumped right out at me.  Sticky buns really aren't one of my favorites.  But these were different than the ones I've made before.  They use a Spiced Sweet Dough as the base.  I took a look at the recipe, and it's a sweeter, lean brioche with cinnamon, ginger and orange zest.  Mmm.  I had to make it.  But I didn't make sticky buns with it.  In addition to the recipe in the paper magazine, there's another one online for Streusel-Topped Chocolate-Cranberry Bread.  Now that sounded really good, especially since I recently discovered that I love cranberries and chocolate together.  The only problem is that I didn't read the recipe closely enough.  It wasn't until after I had chilled the sweet dough overnight that I realized that I was supposed to add the cranberries and chocolate before chilling.  Oops.  Now what?

I decided to play around.  I ended up using the dough to make something similar to a Danish braid, like I made here.  I took half of the dough and rolled it out into a rectangle.  I spread cream cheese filling down the middle third of the dough and cut the sides into strips for braiding.  (Check out some great how-to pics from Kelly at Sass & Veracity here.)  After braiding, I let the dough proof until puffy (maybe about an hour?) and then baked it for about 25 minutes at 350 degrees F.  For the other half of the dough, I used cream cheese filling and also some raspberry fruit butter.  I drizzled the still-warm bread with a simple glaze of powdered sugar and milk. 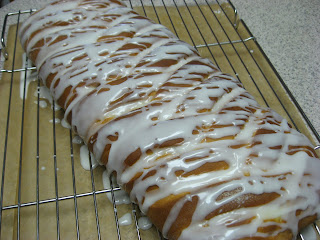 The verdict?  I really, really like this dough.  I will definitely be making it again.  I should have used more filling, since the dough rises a lot more than Danish dough, and the ratio of filling to pastry was off.  But it was still quite tasty.  Jamie and the girls all liked it, too.  Next up will be the chocolate-cranberry bread for sure. =)

You can find the recipe for the dough here.  I'm sure there are lots of other fun things that can be made with it.  And besides sending this over to Ivonne for Magazine Mondays, I'm submitting this to Yeastspotting.  Oh, and my TWD post will be coming in the next day or two, since Laurie said it was okay to post late this week due to the holiday. 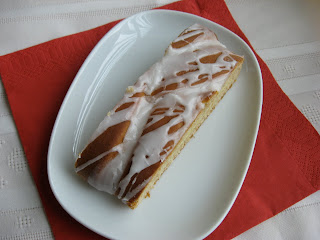