To swirl or not to swirl 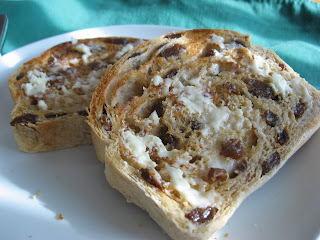 Do you ever have foods that you like, but you just don't eat them all that often so you forget how much you like them? Raisin bread falls into that category for me. When I saw that the next bread for the BBA Challenge was Cinnamon Raisin Walnut Bread, I was excited. I don't recall ever making raisin bread before. And I like just about anything with cinnamon.  (Oh, and for the record, I did make the Cinnamon Buns that came before this bread.  I just didn't blog about them, since I didn't manage to take many pictures.  I've actually made them before, and you can read about that here.) 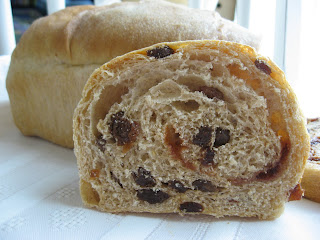 I mostly stuck to the recipe, but I did substitute white whole wheat flour for some of the bread flour (swapped out 4 ounces).  I've been trying to do that with a lot of the bread that I bake.  It's not enough for my girls to notice (or me, for that matter), and I figure it's a step toward eating more whole grains.  Eventually I'll get a copy of Peter Reinhart's whole grain book, but in the meantime, I'll just play around a bit with the recipes I have.  I did leave the walnuts out, since I figured the girls wouldn't be excited about nuts in bread, and I'm not that keen on them either.  I did try one of the variations in the recipe, as well.  Reinhart gives instructions for how to add a cinnamon swirl.  I decided to do that with one of the two loaves, so I could see which one I like better. 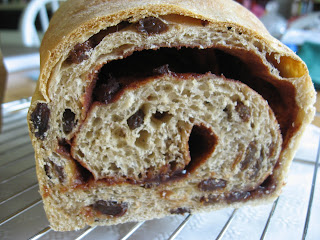 The verdict?  I loved this bread.  I'm pretty sure I'm responsible for eating most of it.  Gillian liked it quite a bit as well.  Brianna wasn't as big a fan, but I know she doesn't like cooked raisins.  I think Jamie got a slice or two, but that was it.  The only issue I had was that I think my bread overproofed a bit during its last rise.  As a result, I ended up with a big gap above the swirl under the top crust, so slices from that loaf tended to unravel.  The plain raisin loaf worked better for toast.  Oh, darn, I guess I'll have to make the swirl version again to see if I can get the swirl to work better.  =)

If you'd like to try this wonderful bread for yourself, check out the book!  And be sure to take a look at the BBA Challenge blogroll to see what all the other bakers have been up to.  You can also see a list of the other bakers in the Slow and Steady subgroup here, on Margaret's blog. 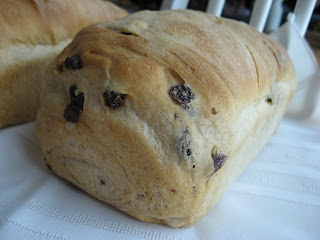