Nuts about chocolate and caramel 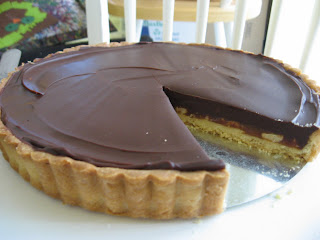 I've had way too many baked goods in my kitchen lately.  There are the cookies that I baked for Brianna's after-school teachers and to have for her lunches (still trying to finish those off).  There were the cranberry pecan rolls that I made for the BBA Challenge (post coming tomorrow, I hope).  I took a bunch of those to Gillian's teachers.  There's the poundcake (in three variations) that I baked via Twitter with Nancy, Sarah and Amy.  Some of that is destined for Brianna's first grade teacher.  There's bread too (baked with Nancy, Kayte and Jessica), but I really needed to make that because we were completely out.

And on top of all that, I needed to make this week's Tuesdays with Dorie recipe, chosen by Carla of Chocolate Moosey.  Once I got a look at the recipe, I knew there was no way I was going to skip it, and not just because I missed last week (still hoping to catch up on that and the chocolate souffles at some point).  Carla picked the Chocolate-Crunched Caramel Tart for us to make.  Chocolate and caramel, what's not to love?  Plus Dorie's buttery, crisp sweet tart crust, which is always fantastic. 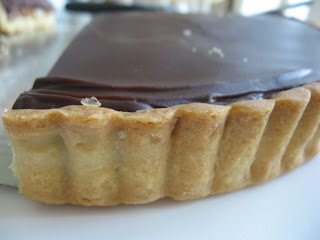 One of the things that was nice about this recipe was being able to make the components in advance.  In fact, I think doing so made it much quicker to assemble the finished tart.  To start, I made the tart dough on Sunday afternoon.  I wasn't paying attention to the recipe, though, and I didn't quite do it the way I was supposed to.  I chilled the dough and then rolled it out, rather than patting it into the pan.  But it worked out okay in the end.  Once I had the dough in the pan, I stuck it in the freezer for several hours, since my oven was busy cooking chicken for dinner.  I eventually got as far as blind baking it (letting it stay in for a few extra minutes so it was nice and browned) and then left it out to cool to room temperature.

Next up was the caramel.  Again, I failed to follow directions, but this time it was on purpose.  Dorie's recipe calls for making a dry caramel by simply sticking the sugar in a pan and heating it until it melts and caramelizes.  I don't like making caramel by that method, so I went ahead and added a bit of water to the sugar along with the corn syrup.  It takes a bit longer, since you have to wait for the water to boil off, but I have better luck doing it that way.  Once the caramel was done (and by the way, did I mention that I'm amazed that making caramel no longer fazes me at all?), I also let it cool to room temperature.  That was it for Sunday.

Monday morning before work, I made the ganache.  It was pretty straightforward, blending the chocolate (I used El Rey Mijao, which is 61%) with some of the cream, then whisking in the rest of the cream and some softened butter.  I put plastic wrap on the surface of the ganache and left it out at room temperature for the day.  By evening, it had set nicely to a thickened but still spreadable consistency.  I then assembled the tart.  I warmed the caramel in the microwave for a few seconds then added a couple ounces of chopped cashews (just plain, not honey-roasted; I'm not fond of peanuts).  I spread the caramel mixture evenly over the bottom of the tart crust.  Then I used my small offset spatula to spread the ganache on top of the caramel.  The quantities were perfect to fill my tart shell.  I put the tart in the fridge for about an hour to make sure it was set, then left it out at room temperature as suggested in the recipe. 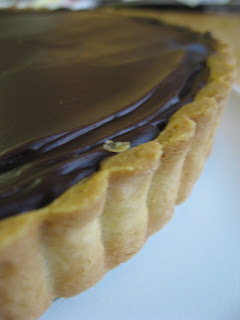 The verdict?  This is one of my favorite TWD recipes so far, I think.  The components are all very good on their own, but the finished tart is even better.  Brianna didn't want to try it (wasn't happy about the nuts, even though I made a point of using ones that she usually likes to eat), but Gillian enjoyed it a lot.  Jamie thought it was quite tasty as well, which isn't surprising since he likes caramel and salty-sweet things.  I was a bit surprised how much I really liked the tart.  It has a great contrast of flavors and textures.  The crisp cookie crust makes a nice contrast to the softer ganache filling.  I decided that the tart was way too dangerous to keep the whole thing around the house, so I took half of it to work.  It was a big hit with everyone there, as well.

If you want to give this fabulous dessert a try for yourself, head on over to Carla's blog for the recipe.  And be sure to check out the TWD blogroll to see what everyone else thought of this week's tart. 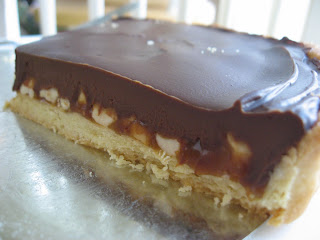