Different than the day before 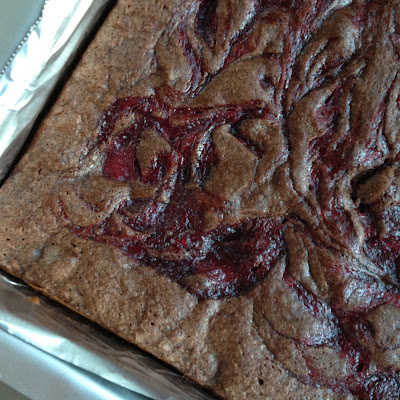 Costco had raspberries for about $4 for 12 ounces the last time I was there.  I bought 3 packages, with the intent of making Jeni's raspberry sauce with a lot of them.  I made a double batch of the sauce, and ended up with about 2 pints.  Some will almost certainly end up inside or on top of ice cream, and I'll probably eat some with yogurt, but I've been looking for other things to make as well.  I was in a brownie mood today, and decided to try swirling some sauce on top of the batter before it went into the oven. The brownies are the Classic Brownies from Cook's Illustrated--I made half the recipe (in an 8" pan), throwing in some chocolate chips instead of adding nuts.  I dolloped about 50 grams of raspberry sauce on top of the batter and swirled it in with a chopstick.  I baked the brownies for 30 minutes.

The verdict?  Quite tasty!  Raspberry and chocolate is one of my very favorite flavor combinations.  The girls thought they were good but weren't totally thrilled.  That's okay, since that means more for me! =)