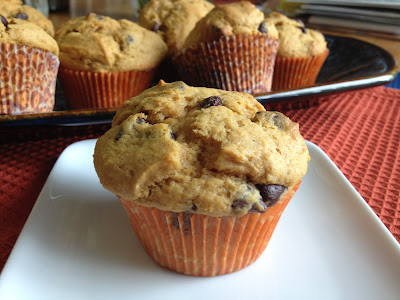 I blame it on Starbucks.  I stopped in there one morning last week because I didn't have anything at home to make a quick breakfast.  So I got some iced tea (it's August in Texas, so I seldom drink hot tea between 7am and 10pm) and stared at the pastry case, looking for something to eat.  The pumpkin scones caught my eye, so I got one.  It was tasty, and it got me started thinking about making my own pumpkin baked goods.  Yes, it's still August, and frequently over 100ºF, but I couldn't get the idea out of my head.  Maybe doing some fall baking will encourage the fall weather to come sooner.  Probably wishful thinking, I know, but we did at least have some serious rain yesterday that kept the temps in the 80s.  The girls and I went to the movies yesterday morning (we finally saw Brave), and came out to find a torrential downpour going on.  We tried to wait it out, but finally gave up and made a run for the car, getting rather soaked in the process.  So we came home and put on dry clothes (actually pjs for the girls) and had hot chocolate.  We can certainly pretend that fall isn't far off. =) 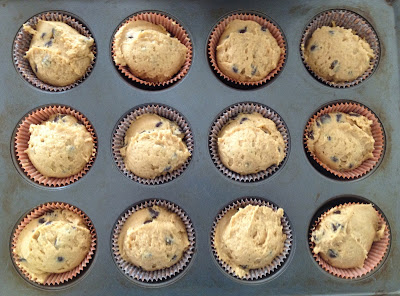 I made the first batch of pumpkin muffins Thursday evening, intending to take them to work Friday morning.  I kept a couple for the girls to eat for breakfast, but Gillian informed me that "you know I don't like things with pumpkin!"  I didn't know that; I figured the addition of chocolate chips would make pretty much any baked good acceptable to my daughters.  So I gave a muffin to Brianna and took the rest to work.  Then Friday evening Gillian informed me that she had a taste of Brianna's muffin and decided that she did like them.  She was rather put out to discover that we didn't have any more at home.  I promised her that we could make more for breakfast on Sunday, so that's what we did. 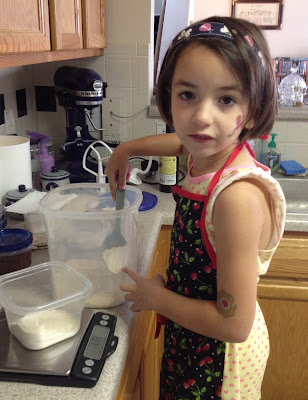 A lot of the time, I just gather ingredients as I go, but when I'm baking with the girls or prepping things the night before so I can bake in the morning, I actually do a fairly complete mise en place.  First we took out the butter and cut it into smaller pieces so it would soften more quickly.  I also took out the eggs so they could warm up a bit--Gillian cracked them into a small bowl to make them easier to add to the mixer later.  I measured the pumpkin and yogurt into another small bowl.  Gillian measured the sugars into a bowl of their own.  Then we measured the dry ingredients (flours, spices, leaveners) into a larger bowl and Gillian whisked them together.  (We did all of the measuring using our scale.)  From there it was pretty easy to mix things up.  First the sugars got creamed with the butter and the vanilla was added.  Next the eggs were mixed in, followed by the pumpkin and yogurt.  Then the dry ingredients were gradually added while the mixer was running.  Finally, we added a cup of chocolate chips, folding them in with a spatula (which also helped make sure all the ingredients in the bottom of the bowl were completely mixed).

I used a scoop (a #16 disher) to put the batter into the muffin pan.  The muffins baked at 400ºF, and for us they took 20 minutes.  We let them cool in the pan for about 5 minutes, then put them on a rack and let them cool just a bit longer before digging in. 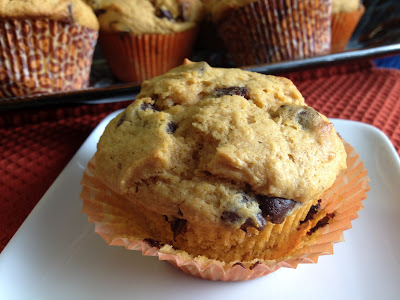 The verdict?  As I said, Gillian has now decided that she likes these muffins.  Brianna does too; she commented that they taste best when still a little warm.  Judging by how quickly the first batch disappeared at work, these were definitely a huge hit there as well.  I got several requests for the recipe.  While I've blogged about these muffins before, for Tuesdays with Dorie, I'm going to share the recipe here, since I've made several changes.

Make sure your rack is in the center of the oven and preheat the oven to 400ºF.  Line a standard 12-cup muffin pan with paper muffin cups (I use grease-proof ones like these) or spray the molds with baking spray.

In a medium bowl, whisk together the flours, baking powder, baking soda, salt and spices.  Set aside.

Using a stand mixer fitted with the paddle attachment or with a hand mixer in a large bowl, beat the butter until soft.  Add the sugars and beat until light and smooth, then mix in the vanilla.  Next, beat in the eggs one at a time.  Continue to beat the mixture for about a minute after the eggs are in, then mix in the pumpkin and yogurt.  Stop the mixer and scrape down the sides of the bowl.  Then, with the mixer on low, gradually add the dry ingredients, mixing only until they disappear.  Remove the bowl from the mixer, and fold in the chocolate chips with a spatula, making sure that all the ingredients are completely blended. (I find that some of the butter/sugar mixture sits in the bottom of the bowl and doesn't get thoroughly mixed in with the paddle.)

Divide the batter between the prepared muffin cups.  Bake the muffins for 20-25 minutes, or until a toothpick inserted in the center comes out clean and the tops of the muffins are lightly browned.  Allow the muffins to cool in the pan for 5 minutes, then remove them from the pan and put them on a rack to finish cooling. 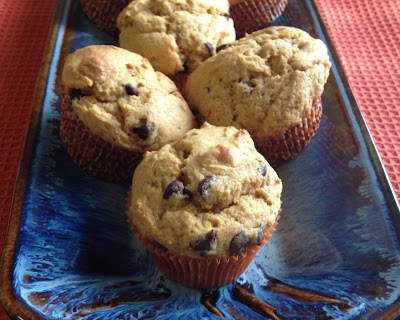