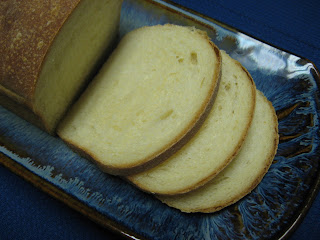 I usually pack my lunch to take to work.  It saves money, not to mention that it's usually nice not to have to go anywhere to get food.  That means more reading time. =)  Occasionally, I just have to get away from work for a bit, but I try to keep that to a minimum.  I get lots of comments from those who envy my lunches, even when it's just a sandwich.  "I bet you made that bread, didn't you?"  No, I don't always, but I definitely like to when I have the time.  I generally prefer hearty breads or rolls for my sandwiches, rather than traditional "sandwich bread."  I'd rather save those pan loaves for toast, or better yet, French toast.  They're also good for grilled cheese, but not what I prefer for cold sandwiches.

White bread dough also makes good dinner rolls, or hot dog & hamburger rolls.  I almost never buy those anymore.  Homemade ones just taste better, as well as hold up better to juicy burgers or sauerkraut on dogs.  Another great thing is that white bread loaves or rolls are relatively quick to make--you use a straight dough that is done all in one day.  There's no need to remember to make a preferment the night before.  The butter and sugar in the dough can slow the rising times a bit, but you can remedy that with either some SAF Gold yeast or using a slightly warmed oven as a proofing box.  Either way, look out, since although the dough can get off to a slow start when proofing, once it gets going it can blow the lid off your container if you're not paying attention. =) 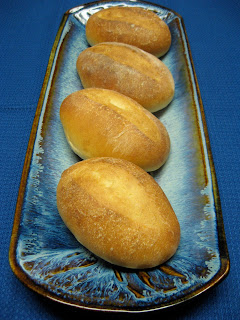 I've pretty much decided that there's no way I'm going to fully complete the BBA Challenge, but my friends Kayte and Margaret are still trying to get it done.  (Some of the recipes just don't appeal to me, and I don't feel like making them just to say that I did.)  Even though I've skipped a bunch of recipes they invited me to join in on the White Bread variations.  I don't actually make regular white bread very often--I usually can't help myself from substituting some white whole wheat flour for part of the bread flour.  In fact, I did just that with the second variation of the BBA white bread, which I posted quite a while back.  This time I decided to stay true to the recipe and make it with just bread flour.  The first variation uses dry milk powder and water rather than milk or buttermilk.  Fortunately I had some dry milk in my pantry, though I think it's almost time to replace it.  Unless it's pretty fresh, I find that it tends to clump up and make small lumps in the dough.

I made the dough with the lesser amount of water, but still found it to be quite sticky.  I added some additional flour while it kneaded in the mixer.  I often start doughs in my stand mixer then finish kneading them by hand so I don't overheat the machine.  That's what I did for this recipe, and I ended up kneading in a bunch of bench flour by hand to get the dough to the point where it was just tacky rather than sticky.  I didn't keep track of the time, I just kneaded until I got a fairly decent windowpane.  It wasn't perfect, but I tend to be impatient when kneading. After the initial proofing (which took a couple hours), I formed the dough into one pan loaf and half a dozen oval rolls.  After letting them rise, I baked the rolls first--they got 15 minutes at 400ºF.  Then I turned the oven down to 350ºF and baked the loaf for about 30 minutes. 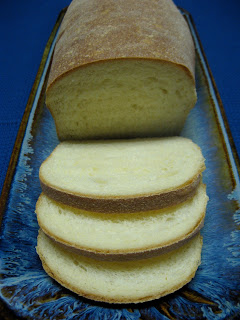 The verdict?  Whole grains and hearth breads are wonderful, but sometimes you just want some plain white sandwich bread.  This one is delicious.  The girls and I sampled some of it with jam for a snack, and it was a hit all around.  B is excited to have the rolls for her lunch, and I'm sure both girls will be happy to have bread stashed in the freezer so we can make toast for breakfast.

If you'd like to make this bread for yourself, I highly recommend getting a copy of The Bread Baker's Apprentice.  There are still a lot of people out there trying to baking through the whole book--you can read about it on the BBA Challenge Facebook page.  You can read Kayte's post about this bread on her blog.  And check out Yeastspotting for lots of other delicious yeasted treats. 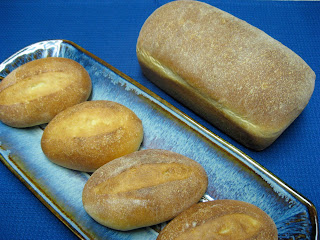