Let's do the twist 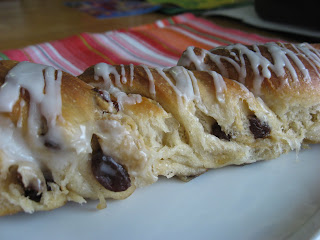 I hope all you moms out there had a great Mother's Day.  Amazingly, I got to stay in bed all the way to 7:30am!  It's nice that my girls are now old enough to fend for themselves for a little while in the morning.  They were camped out in Brianna's room, waiting for me to get up.  Unlike last year, they apparently hadn't come up with any sort of plan to make me breakfast.  That's just as well, since last year they neglected to let my husband Jamie in on the plan until the morning of Mother's Day.  =)  Being of sound mind (sometimes, anyway), I had already come up with my own plan anyway, and done most of the work the night before. 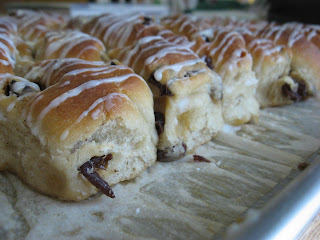 A few weeks ago I was at the library with the girls, and decided to wander through the cookbook section.  I'm not as fortunate as my friend Tracey; my library doesn't have nearly as many as hers does, especially newer ones.  But I stumbled across an older book (2008, so not -that- old) that caught my eye.  It was The Sweeter Side of Amy's Bread.  I had heard of it because Tracey posted a recipe from it a little while back.  Joanne Chang also mentions Amy's Bread in her book Flour, which is one of my current favorite books.  It turns out that the books are similar--home recipes for bakery favorites.  I like the writing style of both, which is what usually leads me to purchase a cookbook.
Once I had the book at home, I read through the whole thing.  Am I the only one who likes to read cookbooks for fun?  I think the people at work have finally gotten used to me doing it on my lunch breaks. =)  I made mental notes of recipes that I wanted to try sooner rather than later, and the one at the top of my list was the Cinnamon Raisin Twists.  They're made from a sweetened dough that contains cinnamon and raisins.  The dough is layered with some butter and brown sugar and then cut into strips that are twisted before baking.  The recipe can be completed in one day, but I broke it up into two.  I completed the recipe up through shaping the twists, but rather than doing the final rise, I stuck the pan in the fridge for the night.  (The recipe calls for two sheet pans for baking the twists, but I crammed them onto one pan since I couldn't fit two in the fridge.)  On Sunday morning, I took the pan out and put it into my slightly warmed oven so that the final proof wouldn't take too long (it ended up being about an hour since I started with cold dough).  Once the twists were puffy, I took them out, preheated the oven, and baked them for about 25 minutes. 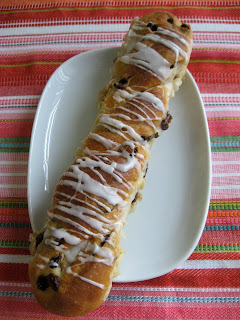 The verdict?  These are fantastic!  Sort of cinnamon roll meets raisin bread.  The only problem I had was that they were too big for any of the small plates we have. =)  Everyone here loved them.  I ended up taking about half of the pan to work today and they were well-received there as well.
I'm definitely going to make these again.  The book also has recipes for some savory versions.  I have plenty of cookbooks already, but now this one is going to the top of my wish list.  Unfortunately, my library doesn't have the first Amy's Bread book; I'll have to see if I can find a copy at one of our local bookstores so I can see if I need that one, too.
For lots of other yummy yeasted treats, be sure to check out Yeastspotting and the BYOB bakers. 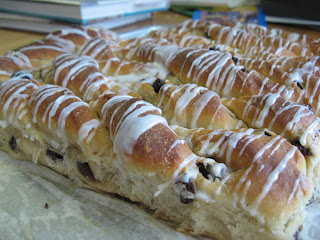