Comfort me with cocoa 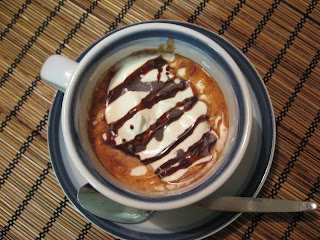 So much has been going on, I don't even know where to start.  (And much of it has been very frustrating, and I don't want to depress everyone.)  Life has been crazy, and busy--I didn't bake anything at all for a week and a half!  I just couldn't find the time or energy.  With all this craziness, I was craving something comforting.  And chocolate. =)  So last night I finally made brownies (these, my favorite) and took them to work today to share.  But for home, I went with hot chocolate.  I did share the hot chocolate as well, but just with Jamie, since I made it an adult version by adding a bit of dark rum.

I don't use an exact recipe, it's just something that I've developed over time, similar to what I posted here.  (One thing I changed is that I melted the chocolate in a bit of boiling water first, before adding the rest of the ingredients.)  Since the hot chocolate isn't overly rich, I like to top it with some whipped cream.  This time I also added a drizzle of some yummy cocoa syrup that I made.  Mmm, dessert in a mug.

Hot chocolate definitely hits the spot on a day like today, when it's obviously winter, even here in Central Texas.  Or like last week, when the temperature wasn't above freezing from Tuesday morning until Friday afternoon.  On Friday morning, we even had this: 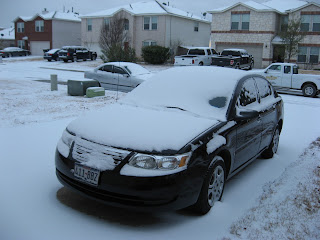 ..which my Texan children thought was a lot of snow.  =)  Can you believe that we had a snow day for that? Of course, there was ice under the snow.  Plus way too many people around here who have no idea how to drive on snowy/icy roads.  Actually, I had to work, but we opened late.  UT was closed, so J got to stay home with the girls.  By Sunday it was 70º again, which it had been the previous weekend as well.  Gotta love Texas weather.
Speaking of Sunday, we spent part of it doing this: 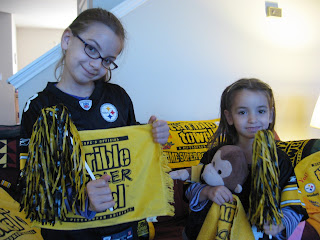 Sadly, the game didn't have the outcome we would have liked.  Maybe we should drown our sorrows in some more hot chocolate. =)
So, which do you prefer, hot chocolate or hot cocoa?  It's definitely hot chocolate around here.  But the syrup was made with cocoa, and I really like the way it turned out.  It's really easy to make, too--boiling water, cocoa powder, sugar, a pinch of salt and a bit of vanilla.  Since the cocoa powder is the star, I broke out my stash of Scharffen Berger cocoa.  The syrup has a pretty intense flavor without being overly sweet, unlike the chocolate syrup we usually buy.  It makes great chocolate milk, too.  If you'd like to try it for yourself, check out the latest issue of Bon Appetit.  There are a bunch of great recipes from Alice Medrich.  I like that she usually uses natural cocoa powder, since that's my preference as well.  You can find the recipe for the cocoa syrup in this recipe for Stout Floats.  Enjoy! 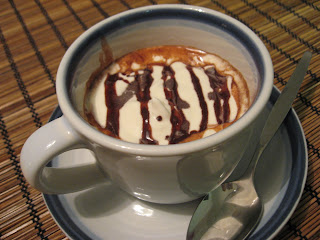