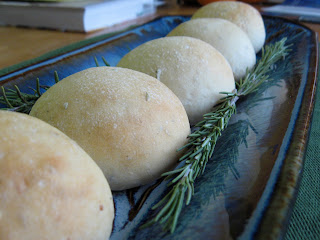 How much menu planning do you do?  We shop once a week--okay, technically twice, since we shop at both HEB and Central Market each weekend--so I plan meals a week at a time.  I try to plan a mix of things, since I know there will be nights when I get home late and won't want to cook anything complicated or time-consuming.  Some meals will be eaten as a family, and some will be done in two seatings (feed the girls to get them to bed, then J & I eat later).  The nights we shop (generally Friday and Saturday) are a free-for-all.  We all eat different things, depending on what jumps into the cart.  Jamie often eats sushi, since he's the only one who likes it.  Salads are popular as well.  One night during the week, we often eat homemade pizza.  And I try to plan something for Sunday or Monday that will have lots of leftovers so that I have something to eat for lunch for the week.  Sunday is also my day for making those more complicated or time-consuming things. =)
That would include some of the French Fridays with Dorie recipes.  One of the recipes for November is Roast Chicken for Les Paresseux, aka Lazy People. =)  I managed to make this one last Sunday.  When I was growing up, we almost always had Sunday dinner, and we'd often have a roast of some sort.  We don't do that very often these days, but it's nice when I have the time and energy to make something more involved.  We had the chicken with mashed potatoes and roasted green beans.  I actually stole the potatoes from the Hachis Parmentier recipe.  I did make that one a couple weeks ago, and while I didn't like it that much with the sausage, the potatoes on top were fantastic.  (Jamie really liked it, though, and happily ate the leftovers.) 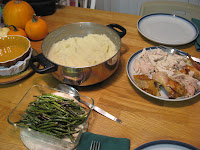 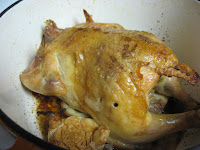 This particular recipe didn't provide me with much in the way of lunch (I tend to go with things like casseroles, spaghetti, soup, etc. for that), but the leftovers did come in handy.  I had leftover potatoes and most of a bunch of rosemary, and I saved the half of the garlic head that was roasted outside the chicken.  So I was all set for my next bread recipe in the BBA Challenge, Potato Rosemary Bread! 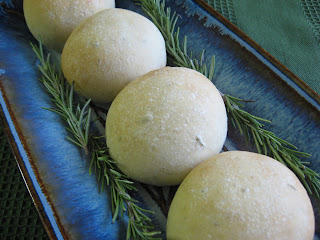 The last bread I posted for the BBA Challenge was the Pane Siciliano back in July.  I skipped over the Panettone for now, but plan to make that in December.  I made the Pizza Napoletana for Daring Bakers a couple years ago.  I did make the Poolish Baguettes and Portuguese Sweet Bread back in August, but didn't get as far as posting about them.  I liked the Poolish Baguettes better than the French Bread baguettes that I made, mainly because I think the addition of whole wheat flour added flavor to the bread.  The Portuguese Sweet Bread made excellent french toast, but was a bit light in texture for regular toast.  Both were good, and I'm glad that I tried them.  But I was quite excited that the next bread was a decidedly savory one. 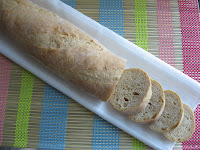 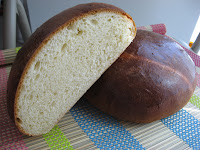 The Potato Rosemary Bread starts with some biga for a preferment.  The full biga recipe in the book makes 18 ounces, but I only needed 7 ounces.  Fortunately the math gets a lot easier when you convert to metric, since 7 ounces is 200 grams.  So I ended up using 120 grams of bread flour, 80 grams of water, and about 1/8 teaspoon of instant yeast.  The biga needed to ferment at room temperature for a few hours, then went into the fridge for the night.
You're supposed to take the biga out of the fridge about an hour before you want to make the final dough, but that timing didn't work for me on Thursday.  Since I was working with a cold preferment, I compensated by using warm water instead of room temperature.  I also warmed up the mashed potatoes (in the microwave) so they wouldn't make the dough too cold.  I mixed the biga with the water, then added the potatoes and some olive oil.  Next in were the flavorings of chopped rosemary and black pepper.  Finally, I mixed in the bread flour, salt and instant yeast.  I mixed the dough by hand initially, using my dough whisk.  Then I used my stand mixer with the dough hook to develop the dough.  Once the dough was close to ready, I took it out of the mixer, added the roasted garlic, and finished kneading by hand.  Then it went into my 2-quart dough bucket to rise.  Once the dough was doubled, I portioned it into 60 gram pieces and formed them into round rolls.  (I ended up with 17.)  I baked them for a total of 20 minutes, and the house smelled fantastic by the time they were done. 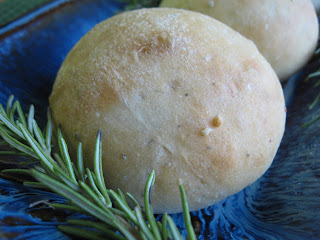 The verdict?  This bread is fantastic!  Everyone here loved the rolls.  I will definitely be making this recipe again--maybe even this weekend, since I still have some leftover mashed potatoes.  The rolls are great, but I'd like to try a larger loaf as well.
If you'd like to try the chicken recipe, I highly recommend that you get your hands on a copy of Around My French Table.  For tips from some of the other members of the group, read the P&Q as well.  For the bread, check out Peter Reinhart's book, The Bread Baker's Apprentice.  There are many, many wonderful breads in this book.  Next up, Pugliese.
I'm submitting these rolls to Yeastspotting. 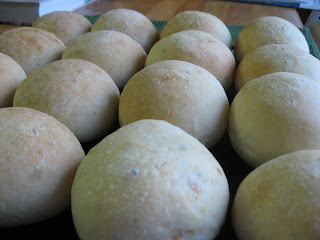