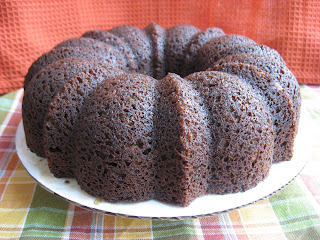 For the past year (not counting our summer hiatus), I've been part of a fun activity with a bunch of other bloggers/bakers.  Each month, we bake and send each other treats.  It's kind of like Secret Santa, but with baked goods, so it ended up with the name Secret Baker.  I've participated every month so far, but was actually thinking of sitting this one out.  Then I got an email from this month's organizer, Kayte.  She said that the theme for the month was Bundt Cakes, and the targeted shipping date was November 15th.  Now as an avid reader of The Food Librarian, I'm well aware that November 15th is National Bundt Cake Day.  So how could I resist? =)  (As it turned out, Kayte didn't know about the significance of the theme and date until I mentioned it.)
Mary, the Food Librarian, is crazy for bundt cakes.  (And I mean that in the best possible way.)  Last year, she posted 30 bundts in 30 days, leading up to the grand finale on National Bundt Cake Day.  And despite vowing never to do it again, she decided to repeat this impressive feat this year.  She welcomed everyone to join her in celebrating today by making bundt cakes of our own.  After she was sweet enough to make a cake that I suggested to her, I knew that I absolutely had to join in. 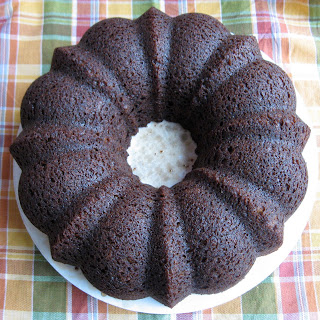 For my Secret Baker recipient, I knew I wanted something with fall flavors.  But I didn't want to try something brand new, since I wouldn't be able to sample the finished product.  (It would be awfully tacky to send a bundt cake with a piece missing.)  I turned to one of my favorite magazines, Fine Cooking, and checked some of the recipes that I have bookmarked online.  I settled on the Espresso Gingerbread Cake.  I've made it before, and it's delicious.  The espresso works well with the dark molasses and spices in the cake.  I thought about buying a new bundt pan, since I've really been wanting this one.  But I'm trying to be good, and well, Christmas is coming. =)  So I went with my Classic Bundt pan.  It makes a very pretty cake. 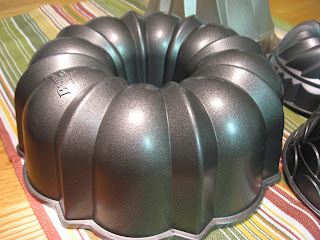 The batter is pretty straightforward to make, using the creaming method.  The liquid comes from brewed coffee or espresso, but I don't usually have those on hand, so I used water with some additional espresso powder added.  Espresso powder also gets included in the dry ingredients, along with ginger, cinnamon, nutmeg and cloves.  The batter filled my bundt pan about halfway, and the cake took 40 minutes to bake.  I wasn't sure about adding a glaze since I'd be wrapping and shipping the cake, so I ended up brushing it with syrup instead.  I made the syrup by mixing 100g of turbinado sugar with 50g of water in a Pyrex measuring cup.  I heated the mixture in the microwave for a minute, and whisked to dissolve most of the sugar.  Then I added half a tablespoon of dark rum and a big pinch of kosher salt to the syrup.  I brushed the bottom of the cake with the syrup while it cooled in the pan for a few minutes before I turned it out of the pan (onto a cardboard cake round).  Then I brushed the syrup all over the rest of the cake.  I only ended up using about two-thirds of it.

The only other time I've shipped a bundt cake, it had a similar syrup, and I think that helped it stay moist during its travel.  Once the cake was completely cool, I wrapped it (cardboard and all) in several layers of plastic wrap.  Then I wrapped it in heavy duty foil.  Then it will go into a box with lots of crumpled newspaper for padding and be sent on its way. 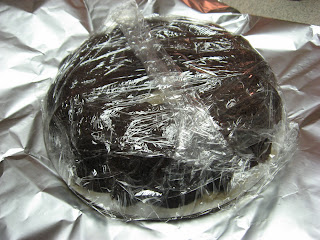 The verdict?  Well, that's hard to say right now.  I'll come back and let you know once the recipient gets it, later this week.  Update: I heard from Tracey, and she really liked the cake. Yay! And it got there in excellent condition.

In the meantime, head over to Mary's blog to see all the great cakes she's baked in the past month.  She'll probably have a recap of them today.  And in a week or two, she'll have a lot of the other great bundt cakes that are being posted around the web today.  If you'd like to try the one I made, you can find the recipe here.  Here's a peek at the rest of my bundt pan collection, as well. (On the left, my two mini bundt pans; they hold three cups each.  On the right, my fancy Kugelhopf pan.)  Happy National Bundt Cake Day! 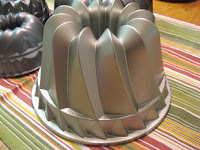 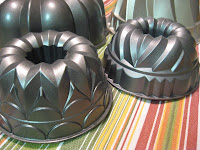