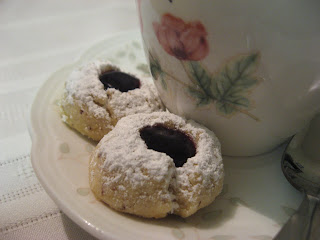 It's a little hard to know where to start, coming back after a two-week blogging hiatus.  Some of you already know that the reason for my absence is that my grandmother died (on February 23rd).  Gillian and I made a trip to upstate New York for the funeral.  We almost didn't make it, due to a huge snowstorm that hit the area on the 25th as we were trying to fly into Syracuse (the closest major airport; we were headed for the Utica area).  The trip would have been the first time that 3-year-old Gillian had seen snow, except that we had a bit of snow here in the Austin area that Tuesday.  We actually got a couple inches here in Georgetown, and some of it didn't melt until the next day.  To be honest, though, this: 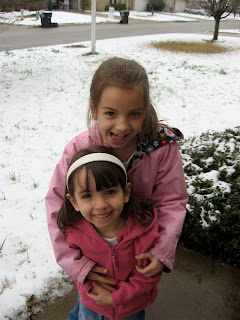 doesn't look nearly so impressive when compared to this: 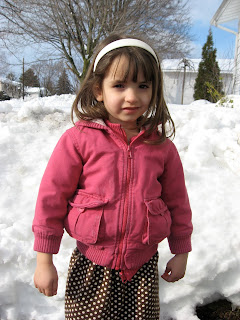 It's still really hard to believe that my grandmother is gone.  She was my mom's mom, and definitely the grandparent that I was closest to growing up.  (And the last one I had left.)  Many of my memories of her (and the rest of my mom's family) involve food.  We'd hang out in the kitchen, helping with cooking, or just talking.  Then we'd sit around the dining room table, eating and talking some more.  We did lots of that over the weekend that I was there.  It was really nice to spend time with all of my family, both in and out of the kitchen.  My grandmother taught all of her kids to cook (including my two uncles) and all still cook a lot.  And bake.  I know that many of the recipes I learned from my mom, she learned from hers.  It's neat to see how we've all put our individual spin on things, but it all started from the same place.  It was nice to compare notes a bit.  For instance, I found out that my uncle Donald has also has some of Peter Reinhart's books and has been trying out some of the recipes.

I'm lucky that I had my grandparents for as long as I did.  My parents were pretty young when they had me, so I had relatively young grandparents on both sides.  As a result, I was able to spend time with my grandmother as an adult as well as a child.  She even came with my mom to visit me here in Texas after Brianna was born.  I got to cook for them for a change, and we got to sit around my kitchen table late at night and talk or read while drinking tea before bedtime.  A week or two after that visit, I came home to find a package on my doorstep.  It was a tea kettle.  I didn't have one, and while Gramma and my mom were visiting, we kept having to boil water in the microwave.  I still use the kettle on a daily basis.  It's a twin to the one that was sitting on the stove in my grandmother's kitchen.  I used hers quite a bit while I was in New York.  And I got to use some of her tea cups as well.  Well, mugs, actually.  My aunt Maureen got her some pretty butterfly ones.  And she had the great idea to get saucers for them as well.  I love using a cup and saucer, but I often want more tea that will fit in some of the teacups.  I came home and went shopping and now have a couple of my own to enjoy.  I'll think of family every time I use them. 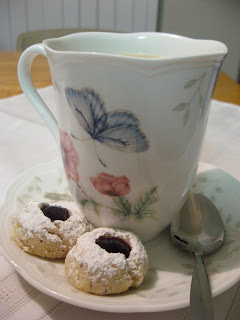 This week's Tuesdays with Dorie recipe is perfect with tea.  Mike of Ugly Food for an Ugly Dude picked Thumbprints for Us Big Guys.  I guess everything is relative, because these still came across as pretty dainty cookies to me. =)  Just the right size for the side of a saucer.  I'm thinking the combination of hazelnuts and raspberry jam is what is supposed to make them "adult" cookies.  They were pretty simple to make, especially since I can buy hazelnut meal in bulk. =)  The only change I made to the recipe was to add a pinch of salt to the dry ingredients.  Oh, and I only made a half batch.  The cookies remind me of the nut balls that we always make at Christmas (aka Mexican wedding cookies or Russian teacakes).  I used my #100 disher to portion the dough, which gave me just the right yield.  I used the handle of a wooden spoon to poke the holes, and baked my cookies for 14 minutes.  They were starting to get golden brown on the bottom, but not really browned on top.  I heated raspberry preserves in the microwave until bubbling, and used a small spoon to fill the cookies. 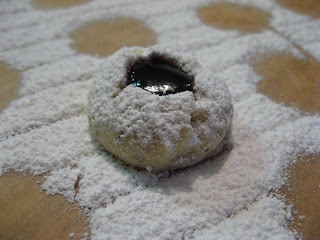 The verdict?  I really love these cookies.  Hazelnuts aren't my favorite, but they worked well in these cookies.  I had toyed with the idea of filling the cookies with ganache instead of jam, but I'm glad I didn't.  The fruitiness of the raspberry was perfect.  I think it's important not to overbake these so they don't end up dry.  Mine had good texture, and I thought they were even better the second day.  I took some to work, and got several enthusiastic positive comments.  I'll definitely be making them again.
If you'd like to give them a try for yourself, head over to Mike's blog for the recipe.  And be sure to head over to the TWD blogroll to see how everyone else did this week. 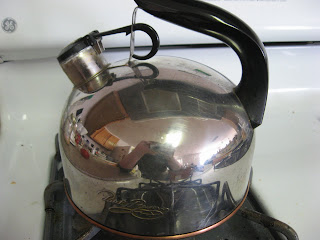