A hit and a miss 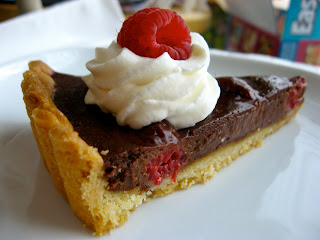 I'm sitting here at my dining room table, and all I can think is how great this chocolate raspberry tart smells now that we've cut into it.  I don't really smell the raspberry, but the chocolate filling and browned crust smell fantastic. =)  Brianna and Gillian were more than happy to help me sample it after I took some pictures.  Anything that bears a passing resemblance to chocolate pudding is a good thing in their book. =)  I'm happy that it was well received, which is more than I can say for dinner.
Are any other parents out there a bit tired of the negative reactions you get when you dare to put something new on the table?  For dinner tonight, I decided to make a recipe from my new issue of Fine Cooking.  It was this, for those who might be interested (I did add some cooked shredded chicken to the dish).  (And I have to say, it's a good thing that I don't blog savory dishes, because as tasty as it was, the dish was far from photogenic--mmm, tan. =) )  I have to give Brianna credit for eating some and not complaining about it too much.  She mostly said that it was okay, but that she prefers regular spaghetti and meatballs.  Gillian, on the other hand, didn't like it at all and was quite vocal about it.  I managed to coax her to eat a few bites of chicken and pasta after removing the offending leeks.  I'm pretty sure the only reason she ate as much as she did is because she really wanted more tart for dessert. =) 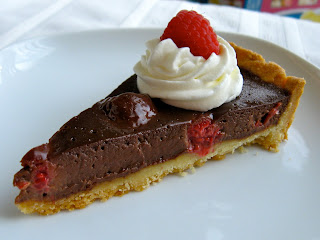 I should probably mention that the tart is this week's Tuesdays with Dorie recipe. (But you already guessed that, I'm sure.)  It was chosen by Rachelle of Mommy? I'm Hungry!.  I was excited to see this one come up, since I love the combination of raspberries with chocolate.  It also gave me another chance to make Dorie's delicious Sweet Tart Crust.  This recipe calls for the variation with nuts, which I haven't tried before.  I dug through my freezer and came up with some almond meal, so that's what I used.  I have to agree with Dorie's suggestion to bake the tart crust a bit longer to make sure that it's nicely browned.  For the filling, I used 3 ounces of El Rey 70% chocolate and 2 ounces of their milk chocolate, which is 41%.  I was happy to find some really nice raspberries that weren't too expensive.  I did end up baking the filled tart for a bit longer than the recipe suggests--35 minutes all together.  At that point it was fully set and just barely puffing around the edge. 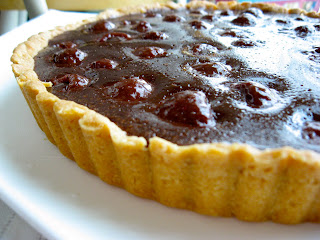 The verdict?  This one is a keeper. =)  I love the contrasts in this tart.  The soft filling contrasts nicely with the crisp crust.  And the flavors work well with each other well--the tart raspberries are a nice foil for the rich chocolate filling, and I love the nutty browned butter flavor of the crust.  Jamie's comment was that the tart is well-balanced.  Brianna and Gillian both loved it, too, especially with some whipped cream on top.  I don't think they even noticed the nuts in the crust (or they would have complained about it). =)
If you'd like to try this one for yourself, head on over to Rachelle's blog for the recipe.  And don't forget to check out the TWD blogroll to see how everyone else did this week! 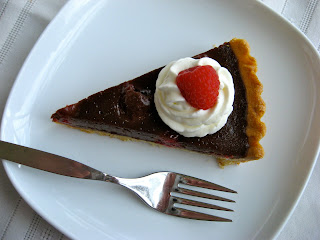