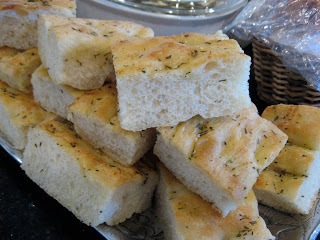 This is a significant post for several reasons.  For one, this makes the 12th post I've done this month, which is a new record.  I've done 11 several times, but never more than that.  And I'm not done for the month, what with at least two more holiday cookies, not to mention some TWD recipes and some more bread.  This also marks my return to posting about the BBA Challenge.  Hard to believe it's been over two months since I posted my variation on the Cranberry Walnut Celebration Bread.  I did make the next recipe, English Muffins, in mid-October.  I wasn't that happy with how they turned out, though, and don't feel like remaking them right now, so I'm just going to skip posting about them.

I've been procrastinating on the Focaccia for quite some time, and it took a couple of different things to finally get me back on track with BBA.  One was that our annual Christmas potluck with the Italian genealogy group coincided with a full weekend off from work (both Saturday and Sunday!).  I knew that the focaccia recipe made a large quantity (a half-sheet pan, 13"x18") and that it would be perfect for a crowd (so we wouldn't eat it all ourselves).  The second was that I signed up for an evening class with Peter Reinhart here at Central Market in January!  I'm very excited about going, and the anticipation has me re-energized about bread baking.  The class is mainly about his new book, but I'm hoping that if I take my copy of BBA maybe he'll sign it for me. =) 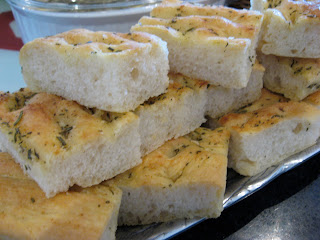 Anyway, on to my recipe notes.  The main thing that had me putting off this bread was the fact that it takes two days.  Since I finally had a Saturday off, though, I figure it was time to tackle it.  It turned out that the whole process wasn't as bad as I thought it was going to be.  I used my mixer for the dough, first with the paddle for the initial mixing, then with the dough hook for kneading.  I did have to add a bit of additional flour to get the dough to clear the sides of the bowl.  After the mixing, it was mostly waiting.  You stretch and fold the dough, then wait a while before doing it again, several times.  Then the dough is gently spread in the pan by using fingertips to dimple the dough, with the help of lots of herbed olive oil.  I went with a simple rosemary and garlic oil, since rosemary was the only fresh herb I had on hand.  Here's what I used:

Once the dough was in the pan, it was covered with plastic and placed in the fridge to develop flavor overnight.  That was Saturday night.  On Sunday morning, I took the dough out of the fridge early, since the recipe says that it needs about 3 hours to proof.  It got some more herbed oil and more dimpling.  At about 2 1/2 hours, I realized that the dough was starting to try to escape from the pan.  So I quickly turned the oven on to preheat, and dimpled the dough  one more time to deflate it just a little.  Once the oven was ready (500 degrees F), I put the pan in, turned down the temp to 450 degrees F as directed, and baked it for 10 minutes.  Then I rotated the pan and baked it for 10 minutes longer, at which point it was starting to brown nicely.  I took it out of the oven and immediately took the focaccia out of the pan and carefully transferred it to a rack to cool.

The verdict?  This stuff is good.  Really good.  But it would be hard for it to be bad, with all that oil adding flavor.  =)  I assume everyone at the potluck liked it--it disappeared very quickly.  The girls and Jamie all liked the focaccia a lot, so I have a feeling I'll be making it again soon.  I'd like to experiment with some different herbs as well as other toppings.  If you'd like to try this one for yourself, get your hands on a copy of the book.  You won't regret it.  And don't forget to check out some of the other bakers who have taken on the BBA Challenge. 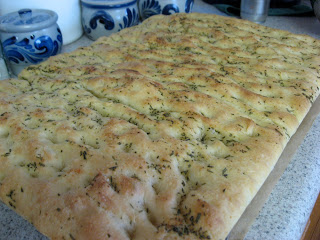