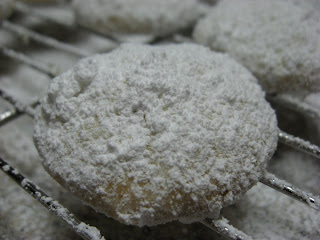 Let it snow, let it snow, let it snow...  Unfortunately, powdered sugar snow is as close as I'm going to get here in central Texas.  It's supposed to get into the 30s tonight (Tuesday) and almost down to freezing tomorrow night (Wednesday), but snow is a rarity.  While we've had a couple of ice storms, the last time we had appreciable snowfall was in early 2004.  I actually remember it quite well--it was a Saturday, Valentine's Day, and Brianna was a little over a year old... 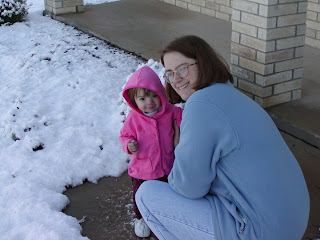 Unfortunately, she was too little to remember it.  But I can show her the photographic evidence.  Gillian, on the other hand, hasn't seen real snow at all.  Who knows, maybe this winter...

So not much chance of snow, but I do have these yummy Lime Snowballs.  They're my second pick for the 12 Days of Cookies.  In appearance they remind me of a family favorite from this time of year.  We call them nut balls, but most people know them as Mexican wedding cookies or Russian tea cakes.  They're my dad's favorite--we'd have to hide them from him so he wouldn't eat them all too quickly.  The favorite hiding place was to stick the cookie tins in the dryer (when it was not in use).  He never thought to look in there.  =)  These cookies have the same powdered sugar exterior, but no nuts.  And they're flavored with a triple dose of lime--zest, juice and oil. 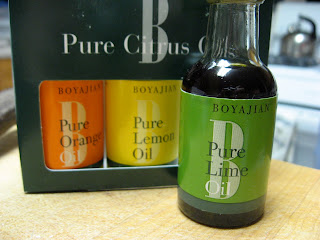 I had to go looking for the lime oil (found this nifty variety pack at Sur la Table), but the rest of the ingredient list is straightforward.  Besides the three lime components, there's only flour, cornstarch, unsalted butter and powdered sugar.  I thought it was a bit odd that there was no salt in the recipe, so I added about 1/4 teaspoon.  Once the dough was mixed, I used my #70 disher to scoop out balls of it and put them on a parchment-lined baking sheet.  (That scoop was just about right--I ended up with 35 cookies.)  I baked them for 22 minutes, at which point they were browning around the edges.  I let the cookies cool on the pan for a couple minutes, then transferred them to a rack.  The recipe says to just sift powdered sugar over them, but I didn't quite follow those directions.  While the cookies were still warm, I rolled them (gently) in powdered sugar so they were thoroughly coated.  Then once I had coated them all, I dusted powdered sugar over them as well. 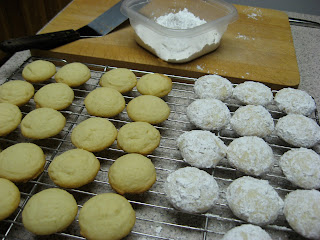 The verdict?  Yeah, there's no doubt there's lime in these. =)  I like them a lot.  So does Brianna--yay, another hit!  They have a great buttery, melt in your mouth texture.  I took a bunch to the daycare Tuesday morning so I wouldn't eat them all myself.  I dropped them off at the front office, then took Gillian to her classroom.  By the time I returned to the front of the building, a couple of the teachers had already sampled them and decided they were wonderful.  By the time this 12 days is over, they're either going to love me or hate me.  =)  Might have to find some other places to share cookies.  I'll definitely be making these again, and hey, I can make lemon and orange ones, too, since I have those oils as well.

If you'd like to make a batch for yourself, you can find the recipe here. 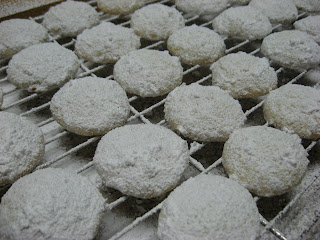 And be sure to check out the other bakers participating in the 12 Days of Cookies to see what they've baked up for today! 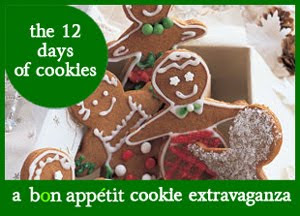