What goes around, comes around 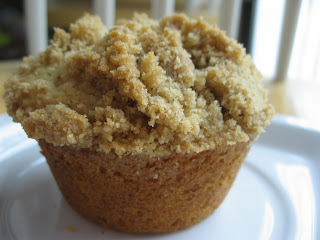 This week's Tuesdays with Dorie recipe really takes me back.  Not to my childhood, as some other recipes do.  No, to the early months of this blog when I first joined TWD.  One of my favorite bloggers, Kayte of Grandma's Kitchen Table, is our hostess this week.  She picked Allspice Crumb Muffins.  The reason these take me back is that they're the second recipe that I made from Baking From My Home to Yours.  The first recipe was the Brown Sugar-Apple Cheesecake that I made the first week I participated.  My second official weekly recipe was the Almost Fudge Gateau.  But in between I was a rebel and made a recipe that wasn't an official pick. =)  You can read about it here.  I was in the mood for muffins, and I couldn't resist trying one of the great-looking recipes in my new cookbook.  I had to laugh when I was rereading that post this evening.  I don't remember the details, but apparently I was enduring some trial with Gillian at the time.  And hey, that's been true the last several days, as well!  *sigh*  I keep telling myself it'll get easier eventually.  It will, right?

Anyway, back to the muffins.  I really liked them when I first made them, but had a few issues.  The biggest was that the muffins spread a lot on top; the crumbs did too.  I've actually made the recipe several times, trying to remedy those problems.  I really love the flavor of these muffins--I seldom bake with allspice, and never just by itself, so they're an interesting change of pace.  But I needed to get them to behave themselves better.  It's actually been quite a while since the last time I tried.  In the meantime, I've made some other muffins and some other streusels, and I had some new ideas. 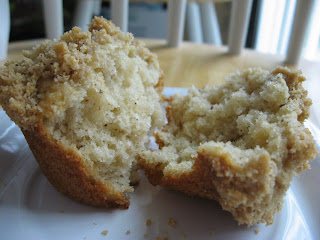 Previously, I've just played around with the streusel.  I tried freezing it first, thinking if it was colder going in it wouldn't spread as much in the time the muffins were baking.  Better, but not enough.  I also tried cutting back on the butter.  The crumbs were better, but the muffins still spread.  This time, I tweaked things with both the topping and the muffin batter.  For the batter, I reduced the amount of melted butter from 8 tablespoons to 6.  I also cut the milk down to 5 ounces (from 6).  At some point, I'd like to try adding some other flours, but I didn't mess with that for this version.  For the streusel, I cut the butter back slightly, 4 tablespoons instead of 5.  I also increased the flour to 3/4 cup, rather than 1/2 cup.  I stuck with my usual baking time of 20 minutes.

The verdict?  I think I've got it!  The muffin tops were perfect.  And the crumbs stayed put!  As I said above, I do want to try other flours, such as white whole wheat (or maybe spelt or kamut) for some of the all-purpose flour.  But I'm really happy with how this batch turned out.  And both Gillian and Brianna liked them.  Okay, actually Gillian was mostly interested in eating the crumb part and just playing with the rest of the muffin.  We're having issues with mealtimes, in addition to the behavior challenges...  Ah, the joys of the almost 3-year-old.  (birthday tomorrow! cake to come!)

If you'd like to try these for yourself, head on over to Kayte's blog for the recipe.  And check out the rest of the TWD blogroll as well. 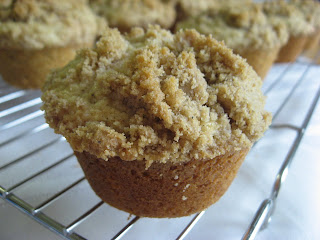