This one goes out to the ones I love 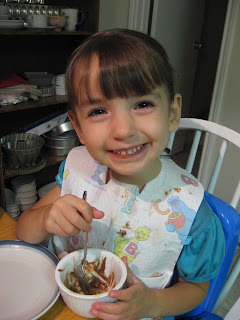 The families of food bloggers have to put up with a lot. =)  It's not too bad at my house, since I only blog baked goods and desserts, but it still affects things.  I'm fortunate in that my husband Jamie eats just about anything (no lima beans or coconut; I'm fine skipping both of those).  It think it's a bit more challenging for Brianna and Gillian, though.  They have to deal with me putting nuts in things.  And weird (to them) bread flavors.  I'm sure they'd love for me to just make ordinary things like chocolate chip cookies more often.

On the flip side, they have fun telling me that I need to take pictures of things. =)  And while they do complain sometimes, both of them will at least try just about anything.  Which is why I try not to push too much when they claim not to like something--at least they try it.  At Gillian's age, I think Brianna liked pesto more than ketchup (though she claims not to like it as much now; it's that control thing).  And how many 6-year-olds insist on having olives, hard-boiled eggs and blue cheese on their salads?  The only thing I can think of that Gillian claims not to like very much is "orange cheese," which means Brianna's favorite sharp cheddar.  I thought at first that it meant that she didn't like sharp cheese.  Nope, 'cause she likes sharp white cheddar just fine.  Go figure.

My children are probably spoiled when it comes to food, actually.  Unlike a lot of their peers (I suspect), neither of them will eat American cheese or jarred pasta sauce.  But they are typical kids in some respects.  While they love granola-type cereals and mini wheats, they also love cocoa puffs. =)  Box macaroni and cheese is another favorite (though we eat Annie's rather than Kraft because they like it better).  They'll eat as many marshmallows as I will give them to go with their hot chocolate.  And they love pudding.

They don't know it, but it's because I do appreciate how willing they are to eat different things and try new ones that I made this week's Tuesdays with Dorie recipe.  Garrett of The Flavor of Vanilla picked Split-level Pudding for us to make, which consists of vanilla pudding on top of chocolate ganache.  I'm not the world's biggest pudding fan.  I can definitely take it or leave it.  And I had to work this past weekend, which left me tired and not in the mood to make much of anything.  But I mentioned to Brianna and Gillian last week that the pudding was coming up, and I couldn't disappoint them.  They've been asking me for days when they were going to get to eat it.  So I finally got it made before work this morning and tucked it in the fridge for tonight's dessert.  I pretty much followed the recipe, except that I was lazy and just used a whisk rather than messing with the food processor.

The verdict?  It was a big hit, as I suspected.  I made the full recipe, so they'll get to enjoy it again tomorrow.  Jamie might try some later.  What I tasted on the spoon this morning was good, but I'll be happy to let the girls have mine. =) 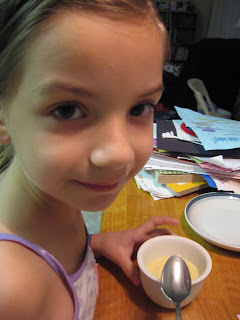