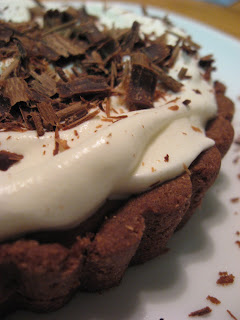 Big G, little g, what begins with G?  Gillian and goat.  G...g...G  And I swear lately that my younger daughter has more in common with a four-legged garbage disposal than just a letter. =)  (My apologies to Dr. Seuss.)  I know that babies go through a stage of putting everything in their mouths.  But shouldn't it have stopped by now (2 1/2)?  If you ask Gillian what is supposed to go in her mouth, she'll tell you "Food!  And drinks!"  But apparently she'd rather chew on paper, and stuffed animals, and whatever else she can get her hands on.  In fact, she's mad at me right now (Monday night) for taking away a book that she was chewing on.
And naturally, she fought me about eating her actual dinner.  Mostly because she's very tired, and didn't nap much today.  She was quite put out when I told her that if she didn't have room for her dinner, she certainly didn't have room for dessert.  She was particularly unhappy because it involved one of her favorite things, chocolate.  (Which she pronounces much better these days...)  Brianna can be pretty stubborn, too, but when I threaten to take away anything resembling chocolate pudding, she falls in line pretty quickly. =)
And this week's Tuesdays with Dorie recipe bears more than a passing resemblance to chocolate pudding.  Kim of Scrumptious Photography picked Chocolate Cream Tart for us to make this week.  The base is a chocolate shortbread crust, which is filled with bittersweet chocolate pastry cream and topped with whipped cream.  I actually got a bit of a head start this week, making the tart dough on Saturday.  Since I knew the completed tart wouldn't keep very well, I decided to make use of my tartelette pans for a change.  That way I could make several small tarts and assemble each of them just before serving.  The full recipe of dough (for a 9-inch tart) worked perfectly for four of my 4 1/2-inch pans.  After pressing the dough into the pans, I stuck them in the freezer for several hours and finally got around to baking them Saturday night.  Even though Dorie says it isn't necessary, I filled them with dried beans (as pie weights) for the first part of the baking.  My parchment paper ended up sticking a bit, but not too badly.  (And I learned my lesson and used non-stick foil instead when making my cheesecake crusts on Sunday.) 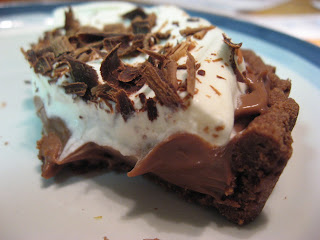 I didn't get to the chocolate pastry cream until Sunday morning.  I've made variations of Dorie's pastry cream several times now.  I'm not overly fond of plain vanilla pastry cream (that custardy thing again), but I do enjoy the flavored versions.  And this one has a whole bunch of bittersweet chocolate mixed in (I used El Rey 61%), so how could it be bad? =)  Now I just have to use up the leftover egg whites.  I have a ton in my freezer already.  I'd usually use them to make angel food cake, but just haven't gotten around to making one lately with all the other things I have to do.
I assembled one of the small tarts for dessert for Brianna and Gillian on Sunday night.  The small pans have shorter sides, so you can't put quite as much filling in them.  (Oh, darn, we might just have to eat the extra chocolate cream.)  I already had some lightly sweetened whipped cream in the fridge, so that part was easy.  And I'd remembered to pick up a bar of bulk chocolate in addition to my usual discos, so I was able to make some chocolate shavings.  I was trying for curls, but got impatient.  (One thing that helps is microwaving the chocolate bar on low power for a few seconds.)
The verdict?  This tart is definitely more than the sum of its parts.  The tart shell by itself is not very sweet at all.  But it's a great foil for the amazing chocolate pastry cream.  And the whipped cream on top is essential.  It provides a delicious contrast to all the chocolate.  Brianna and Gillian didn't like the crust as much--while they do like dark chocolate, it wasn't quite sweet enough for them, I think.  But they devoured the "chocolate pudding" and whipped cream.  I'll definitely be making this recipe again, though I'll probably skip the crust for the girls.
If you want to try this one for yourself, head on over to Kim's blog for the recipe.  And while you're there, be sure to take the time to look at her other gorgeous posts.  She takes the most wonderful pictures of everything.  And be sure to head over to Tuesdays with Dorie to see what the other TWD geniuses have created this week.  =) 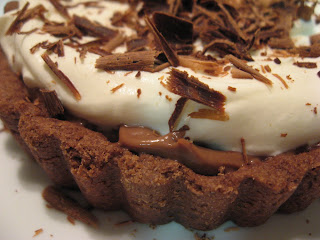