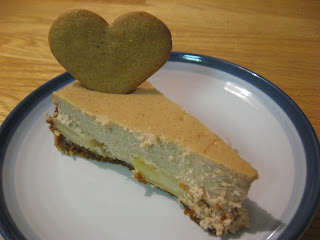 Okay, so the title is a bit of an exaggeration.  I do like cheesecake, but my heart belongs to chocolate.  =)  For my first Tuesdays with Dorie recipe, I got to make Brown Sugar-Apple Cheesecake, which was the choice of Jaime at Good Eats 'n Sweet Treats.  When I first learned what the recipe was going to be, I thought, "Interesting.  I never would have thought to put apples in cheesecake." Once I read the recipe, my thoughts were less positive--"Wait, I don't have a 10-inch springform pan. And what the heck am I going to do with a cheesecake that big?"
Well, when we went to Central Market Friday night, I was lucky enough to find a 26-cm pan there, which saved me a trip to Sur la Table, Williams-Sonoma or Ace Mart.  Which was fortunate, since I didn't really have time to do much shopping since I had to work Saturday and I planned to make the cheesecake on Sunday.  I might have been able to make the cheesecake in my 9-inch pan, but I'm glad I didn't try.  I also found cute heart-shaped gingersnaps.  Most of them got crumbled up for the crust, but I saved a few whole ones for a garnish.
I like the way Dorie breaks down the steps in the directions.  They were very straightforward to follow.  First I made the crust.  I had to rearrange quite a few things to make room for it in the freezer while I preheated the oven.  While I was waiting for the oven, I peeled and cut up the apples (I used Golden Delicious).  I only bought two (and cut them into 12 slices each), since the only ones I could find were quite large.  The crust went into the oven to bake and the apples went into my skillet to brown and be coated with brown sugar.  When the crust and apples were done, they both got set aside to cool and I moved on to the filling.  It was similar to other cheesecakes that I've made, but with different flavorings.  I put the springform pan in my roasting pan (yay!  the roasting pan was big enough).  As directed, I put part of the batter into the pan and then topped it with the apple slices.  I actually used tongs to transfer them, rather than a slotted spoon. Then the rest of the batter went in.  I added the water to the roasting pan and put the whole thing (carefully) in the oven.  I ended up baking it for 90 minutes all together.  As instructed, halfway through the baking time, I tented it with foil.  I used non-stick, but the cheesecake puffed up more than I expected, and it stuck to the foil in a couple of spots.  Oops.  That's why I'm glad I didn't try to make it in a smaller pan.  If I had planned to take the cheesecake anywhere, I would have come up with a topping to disguise the dents in the top (like caramel sauce?), but as it was, I didn't really worry about it.  I let it cool pretty much to room temp and moved it to the fridge. Before I did so, I ran a plastic knife between the edge of the pan and the crust to make sure it wasn't stuck (I didn't want cracks on top of the divots I already had).
Jamie and I sampled it for a late dessert Sunday night, after the bare minimum 6 hours in the fridge.  I'm not sure what I was expecting, but it was quite good.  The apples made it hard to cut neat pieces, though.  We had more on Monday, and I think it was even better after it had chilled more (not surprising).  I don't know that I'll make it again just for us--it is a pretty big cheesecake, after all--but I might if I have somewhere good to take it. 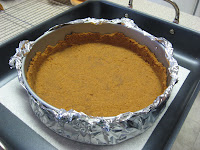 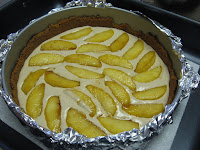 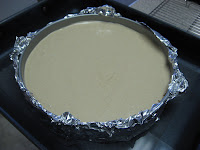 Apple jelly, for glazing, or confectioner's sugar, for dusting (optional)

To Make the Crust: Butter the bottom and sides of a 10-inch springform pan.

Put the gingersnaps in a food processor and whir until you have crumbs; you should have a scant 2 cups. (If you are using graham cracker crumbs, just put them in the food processor.) Pulse in the sugar and cinnamon, if you're using it, then pour over the melted butter and pulse until the crumbs are moistened. Turn the crumbs into the springform pan and, using your fingertips, firmly press them evenly over the bottom and up the sides of the pan as far as they'll go. Put the pan in the freezer while you preheat the oven. (The crust can be covered and frozen for up to 2 months.)

Center a rack in the oven and preheat the oven to 350 degrees F.

Remove the pan from the freezer and wrap the bottom tightly in aluminum foil, going up the sides. Place the pan on a baking sheet and bake for 10 minutes, or until the crust is set and lightly browned. Transfer to a rack to cool while you make the apples and the filling. Leave the oven at 350 degrees F.

To Make the Apples: Melt 2 tablespoons of the butter in a large nonstick skillet over medium-high heat. When the foam subsides, toss in half of the apple slices and cook, turning once, until they are golden brown, about 3 minutes. Sprinkle the apples with 1 tablespoon of the sugar and cook them, turning, just until coated, another minute or so. Scrape the apples onto a plate, wipe out the skillet and repeat with the remaining apples. Let the apples cool while you make the filling.

Getting Ready to Bake: Have a roasting pan large enough to hold the springform pan at hand. Put a kettle of water on to boil.

To Make the Filling: Working with a stand mixer, preferably fitted with a paddle attachment, or with a hand mixer in a large bowl, beat the cream cheese on medium speed, scraping down the bowl often, for about 4 minutes, or until it is velvety smooth. Add the sugars and beat for another 2 minutes. Beat in the cider, vanilla, and cinnamon. Reduce the speed to low and beat in the eggs one by one, beating for 1 minute after each egg goes in. Finally, beat in the sour cream and heavy cream, beating just until the batter is smooth.

Pour about one third of the batter into the baked crust. Drain the apples by lifting them off the plate with a slotted spoon or spatula, and spoon them into the pan. Cover with the remaining batter and, if needed, jiggle the pan to even the top. Place the springform pan in the roasting pan and pour in enough boiling water to come halfway up the sides of the springform pan.

Bake the cheesecake for 1 hour and 30 to 45 minutes, covering the cake loosely with a foil tent at the 45-minute mark. The cake will rise evenly and crack around the edges, and it should be fully set except, possibly, in the very center--if the center shimmies, that's just fine. Gently transfer the cake, still in the pan, to a cooling rack and let it cool to room temperature, then refrigerate it for at least 6 hours; overnight would be better.

Run a blunt knife around the edges of the pan to loosen the crust, open the pan's latch and release and remove the sides.
Posted by Di at 8:04 AM