It's been a long week.  When I was talking to my mom last Sunday, I jinxed myself.  For the past month or so, somebody around here has been under the weather--colds and/or allergies.  I mentioned to her that I thought we were finally all pretty much well.  Famous last words... Brianna got sick on Monday and was home from daycare Tuesday through Thursday.  By the end of the day on Friday, Gillian had the same thing and has been sick all weekend.  Brianna's feeling much better, but still isn't quite herself--definitely more sensitive than usual.  And that's saying something, since she's been quite challenging to deal with lately--it's tough being five.
After last week's success with the bagels, I wanted to try them again, and the kiddos were being pretty cooperative this morning.  I knew that Jamie (my husband) would be happy with more experimentation--during the week he was looking for more recipes for me to try for other flavors that he likes (most notably egg bagels, which will undoubtedly be a future installment of the Bagel Chronicles).  Things were definitely easier the second time around, and I tweaked things a bit in the process, including using my stand mixer rather than mixing and kneading by hand.
The original recipe can be found here, as I mentioned in my last bagel post.  Here's pretty much what I did:
1 gallon water
1/4 cup packed light brown sugar
1 1/2 cups (12 oz) water (I used bottled since my tap water is extremely hard)
3 tbsp granulated sugar
1 1/2 tbsp instant yeast
3 1/2 cups (17.5 oz) bread flour (King Arthur), divided
1 1/2 tsp table salt (the original recipe was only 1 tsp)
canola oil
1 egg white
1 tbsp cold water
assorted toppings
The dough rises quickly, so I started off by adding the gallon of water to my biggest pot and putting it on the stove to bring it to a boil.  Once the water started boiling, I added the brown sugar and just turned it down to a simmer.  I also started preheating the oven to 400 degrees F, and I oiled my dough-rising bucket with a bit of canola oil.  I pulled out a large baking sheet and lined it with parchment paper.
I put the 1 1/2 cups of water in a 2-cup Pyrex measuring cup and microwaved it for one minute to heat the water.  I stirred in the sugar and yeast and set it aside for a couple of minutes.  Meanwhile, I put 1 1/2 cups (7.5 oz) of bread flour in the bowl for my mixer and added the salt.  I used the paddle attachment and set the mixer to stir to combine the two, and then added the liquid.  Once things were blended, I started to add the other 2 cups (10 oz) of flour a spoonful or two at a time.  Once the dough started to come together, I stopped the mixer and switched to the dough hook.  I kneaded the dough for 5 minutes with the speed set to about 3.  I used a rubber spatula to scrape the dough into my prepped bucket and turned the dough around a bit to coat it with oil.
Once the dough doubled in size, I turned it out onto a lightly-floured counter.  I used my dough scraper to cut it into 8 equal pieces (about 4 oz each).  I rolled each piece into a long rope, joined the ends together and placed it on the parchment-lined pan to rise a bit. 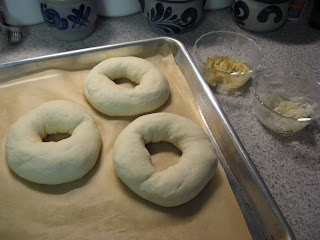 Once I had 5 or 6 pieces formed into bagel shapes, I put the first couple into the water.  They stayed in for 3 minutes on each side and then got transferred to a kitchen towel on the counter to rest.  The rest went into the water in two batches of three each.  Once all of the bagels were boiled, I put them back on the parchment-lined baking sheet.  I whisked the egg white and water together and brushed it on the tops of the bagels.  Then I added toppings.  I made sure to make three salt bagels this week, since Brianna complained about not getting one last week.  I did three sesame, and branched out a bit and did one garlic and one onion this week.  For the onion and garlic toppings, I rehydrated dried minced garlic and onion with a bit of boiling water.  It worked pretty well. 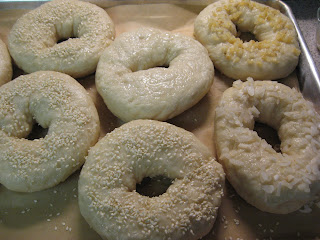 Into the oven they went.  I baked them for 25 minutes, then flipped them over and put them back in for another 10 minutes.  The onion and garlic made the kitchen smell great!  It was really hard to wait for the bagels to cool enough to cut well.  Finally, they were ready.  I got Brianna's bagel ready for her.  I thought she'd be excited, since I made a point of making her a salt bagel and I put her favorite garlic cream cheese on it.  Instead, I got nothing but tears and complaints.  She didn't want that particular bagel, she wanted a different one.  I didn't put the cream cheese on the right way.  She didn't like the way I cut it.  *sigh*  Some days I just can't win.  Eventually the crying stopped, and she did eat part of it. 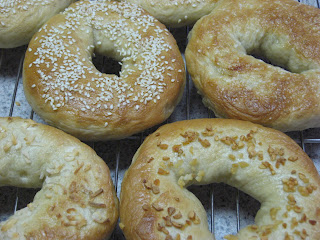