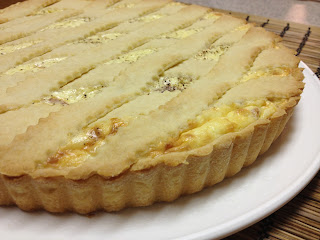 When I first read that this week's Tuesdays with Dorie recipe was Pizza Rustica, I figured that it would go over well here, since everyone in the family loves pizza.  Then I actually looked at the recipe and realized that it wasn't pizza in the traditional sense.  Instead, it's an Italian pie, filled with cheeses and prosciutto and eggs.  The twist with this one is that the dough is sweet instead of savory.  I knew that my husband would probably like this dish, since he likes the contrast of sweet and salty/savory.  My girls are fans of pretty much anything with a ricotta filling, so I figured there was a decent chance that they would eat it without complaint.  It feels like we've been in a rut lately as far as meal planning, so I was excited to try something new for dinner. 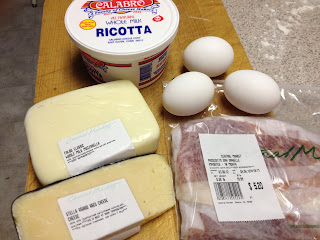 I decided that I wanted to make a tart rather than a pie.  Since I knew the tart pan would be shallower than a pie pan, I used my 10" pan.  For the filling, I used my favorite whole milk ricotta and substituted Asiago cheese for the Romano.  I almost forgot about the pepper, and ended up grinding some on top of the tart filling after it was already in the pan, before I added the lattice strips.  The dough was very nice to work with--easy to roll out and put in the tart pan.  I used my fluted pastry wheel to cut the strips for the top.

For baking, I preheated the oven to 375ºF since I was using a metal tart pan.  I placed the tart on a baking sheet and put the sheet pan directly on my baking stone in the lower part of my oven.  I usually do that for pies and tarts to ensure that the bottom crust bakes well and doesn't end up soggy.  The tart took 35 minutes to bake, at which point it was puffy all over and starting to brown.  We let it cool somewhat, but it was still warm rather than at room temperature when we ate.  I warmed up some of our usual pizza sauce to serve on the side. 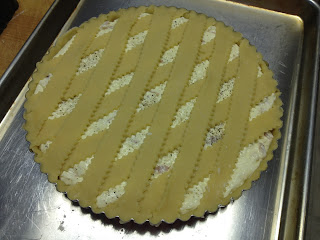 The verdict?  This went over pretty well!  As predicted, Jamie liked it; Brianna did, too.  Gillian didn't like the prosciutto, but said she might eat it without the meat or with regular ham instead.  The girls weren't sure what to think about the slight sweetness of the crust; I might try a less sweet version next time.  The tart was good both with and without the tomato sauce, but J pointed out that the sauce brought some nice acidity to the table to balance all the rich ingredients in the tart.  I can definitely see myself making this again, and maybe playing around with the filling ingredients.

If you'd like to give this a try for yourself, you can find the recipe on Emily's blog or Raelynn's blog.  To see what everyone else thought of this week's selection, check out the Links. 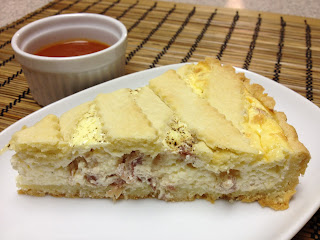