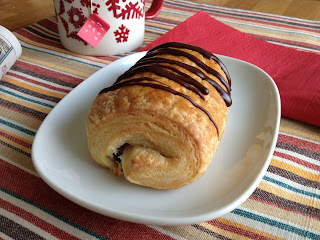 It's been a busy week for the Tooth Fairy at our house.  Between them, my children managed to lose three teeth in the span of four days.  Brianna lost one last Wednesday (I had to help that one along a tiny bit).  Then on Friday when I picked Gillian up from daycare, she proudly showed me the tooth that came out at naptime (she managed that on her own).  But the most dramatic was on Saturday night, when B bit down on the piece of chocolate that she was eating for dessert and another tooth came out with it.  Much more of this, and the Tooth Fairy is going to start demanding overtime pay! 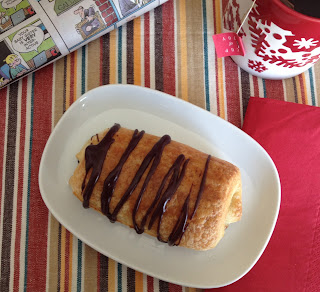 Maybe I can bribe her with some danish instead.  I know how powerless I am at resisting the buttery, flaky goodness that comes with laminated dough.  I've made danish and croissants the traditional way, wrapping dough around butter, and doing lots of folds and turns.  There's no question that the end result is fantastic.  But I'm not always in the mood for something that finicky.  That's why I was glad to see a recipe for Rough Danish Dough in Dan Lepard's column in the Guardian last weekend.  First you make a quick sponge with water, instant yeast and bread flour, and let that sit for about an hour to get bubbly.  The final dough calls for 00 flour but I didn't have any, so I used all-purpose flour instead.  Being danish dough, there's a little sugar and a couple egg yolks added to the dough as well.  Instead of forming the butter into a big block, you leave it in large cubes and mix it into the dough. 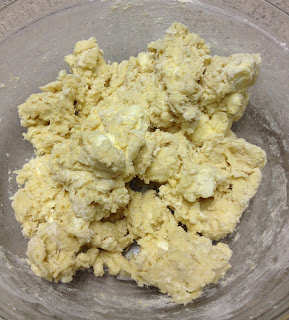 As you roll the dough out, the butter is flattened out into thin sheets.  As you fold the dough (like a letter, in thirds) and roll it out again, layers are formed.  The dough goes into the fridge for half an hour between the turns so that the dough can rest (which makes it easier to roll out again) and the butter can firm up a bit (so it doesn't get squished out all over the place).  For some tips and great step-by-step photos of folds and turns (for traditional croissants), check out my friend Tracey's blog.  She and I actually made the danish dough together via Twitter.  One tip that I found helps with the rough version is to keep extra flour handy.  If the dough is sticky and the butter is trying to break through, coat that spot with some flour and keep going.  I also kept my bench scraper nearby to pick up the dough and make sure there was enough flour underneath as well.  The first turn is kind of a mess, but don't be discouraged.  The second will be better, and by the third, the dough will look a lot like traditional laminated dough.

The recipe says you can shape the dough right after the chilling after the third turn, but I left my dough in the fridge overnight.  You don't want to leave it for much longer than that; the yeast in danish dough keeps fermenting and it gets pretty puffy.  When I was ready to use the dough, I divided it in half.  One half I wrapped really well (plastic wrap and then a freezer bag) and put it in the freezer.  The rest I made into rolls filled with chocolate.  I ended up making half a dozen, and dressed them up with a drizzle of chocolate glaze after baking. 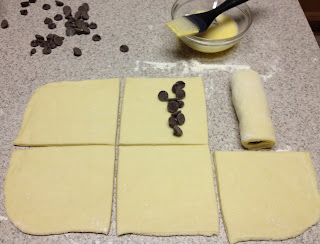 The verdict?  So, so delicious.  Brianna and Gillian loved the chocolate-filled danish.  The glaze was a bit over the top for me, but still really good.  I eventually ended up making a raspberry-filled danish braid with the other half of the dough, and it was amazing.  I'll definitely be making this recipe again.  I even bought some 00 flour when I was at Central Market this weekend so I can try the recipe with that.

If you'd like to try your hand at danish dough, you can find the recipe here in the Guardian.  You can also find lots of other great recipes from Dan Lepard in their How to Bake series.  Also, check out Yeastspotting for lots of other amazing yeasted treats! 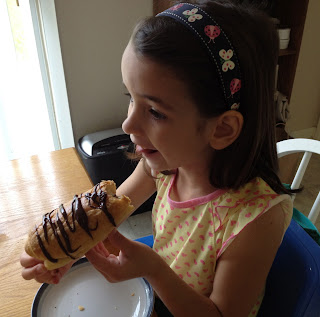