Have your cake and ice cream, too 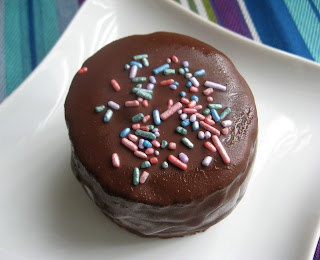 Well, it's back to work for me tomorrow.  On Friday, I stopped by work briefly, and several people asked me what I'd been doing with my time off.  The answer?  Absolutely nothing. =)  Or at least, pretty darn closed to that.  I did get to spend a couple days with Gillian (while Brianna was at school), which was nice.  At her request, we did a little shopping on Thursday.  Ah, to be 4-going-on-5 again--the days when all it takes to make you happy is some new socks and leggings and a 99¢ plastic pencil box.  Maybe it was the youthful company, but I did a little shopping for myself, and walked out of Office Depot with over a dozen colorful Sharpies.  I try to stay out of there, since I lack willpower when it comes to office supplies... =) 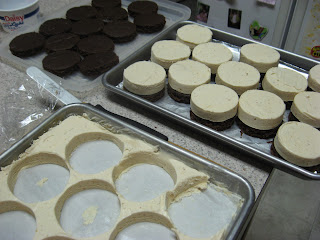 I also did lots of baking over the past week.  The most involved creation for the week was also one that would easily win the heart of any 4-year-old, not to mention most big kids.  I've mentioned before that I'm a DBCB.  The reason I went into work on my vacation is that Friday was the birthday of one of my employees, and another has a birthday tomorrow.  Fortunately, they're both old enough not too complain too much about having to share.  But just in case, I found a good solution--I made everyone a cake of his or her own.  My employee A has been nagging me incessantly about making peanut butter ice cream for her ever since I brought some to work for another event.  She even suggested that I make ice cream cake.  Normally that would be too hard too pull off, but since I was off, I could bring the dessert in at lunch time so it wouldn't have time to melt.  So I made a bunch of mini ice cream cakes! 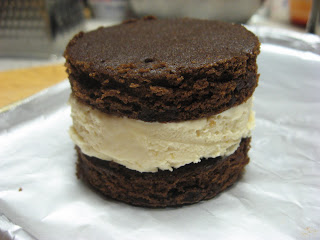 The first thing to decide on was the cake.  I knew I wanted chocolate, and a cake that would be good cold.  One of the first recipes to come to mind was one from Dorie Greenspan's Baking From My Home to Yours.  If you're familiar with the book, you'll remember the fabulous cake on the cover.  In the headnote for the recipe, Dorie says, "Freshly made or at room temperature, they [the layers] are moist and a little fluffy; chilled, they're still moist, but denser and firmer, very much like a super-fudgy brownie."  That sounded like just what I wanted.  Since I wanted thin layers, I used my quarter-sheet pans in place of the 8" rounds called for in the recipe.  (The bake time was 20 minutes, and I lined the pans with parchment to make it easy to remove the layers once cooled.)  For the ice cream layer, I used one of the same pans, and right after churning the ice cream, I spread it in the parchment lined pan and froze it until it was very firm.

For the assembly, I used a 2 1/2" biscuit cutter (from this set) to cut out rounds.  I got 14 from each layer.  I stacked the layers--cake, then ice cream, then cake--and stuck the cakes into the freezer overnight to make sure they were completely frozen before I covered them in chocolate.  I debated what to use for a coating, but decided to go with the Chocolate Bombe Shell from my copy of Jeni's Splendid Ice Creams at Home.  (The peanut butter ice cream was also from that book.)  I put the cakes on a rack placed over a sheet pan lined with non-stick foil and spooned the chocolate mixture over them.  I did three at a time, keeping the rest in the freezer until I was ready for them.  Also, if you work fast, you can put sprinkles on top before the shell completely hardens so they stick well.  The nice thing about the chocolate shell mixture is that you can stick the sheet pan in the freezer for a few minutes and the chocolate will harden so that you can easily peel it off the foil.  Then you can just break it up and remelt it. 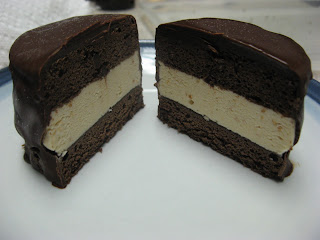 The verdict?  Well, this is now the newest "best thing that you have -ever- made!" according to my co-workers.  It was a big hit here at home, too.  I'm already thinking of different flavors that I can put together, especially since Gillian wasn't a huge fan of the peanut butter ice cream.  I have lots of cake scraps left, too, so they may end up in some sort of trifle, unless I manage to just eat them all.

If you'd like to try these little cakes for yourself, here's where you can find recipes for the components I used.  Or you can just have fun experimenting for yourself.  Enjoy! 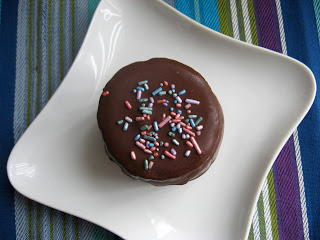