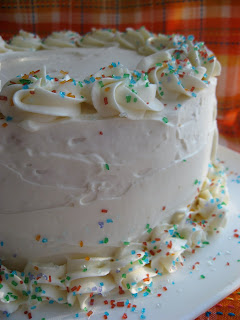 I've been trying to write this post for the past week, and just haven't been able to figure out what to write.  Then last night I opened up my Google Reader, clicked on the latest Baking Banter post, and started laughing.  Why?  Because I'm a proud DBCB, and have been for a long, long time.  What's a DBCB, you ask? A Designated Birthday Cake Baker, of course.  Meaning that I bake birthday goodies for all the people I work with.  I've been doing it for about 15 years, and it's always appreciated.  Sometimes it's cake, sometimes cupcakes.  I've made strawberry shortcake a couple times, and several cheesecakes.  I'll come up with something on my own if necessary, but I certainly take requests.  The one that sticks out most in my mind is the German Chocolate Cake I made a few years ago for one of my employees.  I absolutely detest coconut, so I didn't actually sample the topping or the finished cake.  Fortunately, it was  a hit.  And everyone was amused by the fact that along with the cake, I also brought the rest of the bag of coconut to work.  I wasn't about to let it stay in my house! 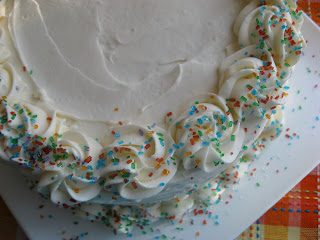 For this latest cake, I didn't have to do anything traumatic like buying coconut.  =)  I asked M, the birthday girl, if she had any special requests.  She commented on how much she liked the texture of the frosting on the cupcakes I'd brought in a while back.  They were topped with Swiss meringue buttercream, which I've made many times.  Her only other request was something non-chocolate.  As Brianna would say, she likes chocolate, but it's not her favorite.  So I decided to go with a classic vanilla cake topped with vanilla buttercream.  I thought M would be happy with it, and I suspected that no one else would complain.  It's kind of like my favorite plain cheese pizza.  Most people might not request it, but no one will turn it down if it's around! For the cake, I used my favorite white cake recipe from The Cake Bible, the White Velvet Butter Cake.  I added a tablespoon of rainbow non-pareils to the batter to make the layers more festive.  You just have to work quickly to fold them in, so you don't end up with streaks of color in the batter instead of just polka dots.  I wanted a taller cake, so I baked the batter in 8" round pans, rather than the 9" ones called for in the recipe.  The layers took about 40 minutes to bake.
As I mentioned, for the frosting, I knew I wanted to make a Swiss meringue buttercream.   I decided to try out a new recipe, from The Sweeter Side of Amy's Bread.  The main difference is that it uses about 20% shortening instead of all butter, which is supposed to help keep the frosting a bit more stable at room temperature.  As hot as it's been here lately, I wanted all the help I could get to keep the frosting from melting.
When I was assembling the cake, I topped the bottom layer with vanilla buttercream, then had the idea to add something else.  I still had some of the raspberry "sauce" that I used for this ice cream, so I spread it on top of the frosting, before adding the second cake layer.  The whole cake got covered in buttercream, then I piped rosettes around the top (thanks to another Baking Banter post for the inspiration) and a shell border around the bottom.  The finishing touch was some rainbow sparkling sugar. 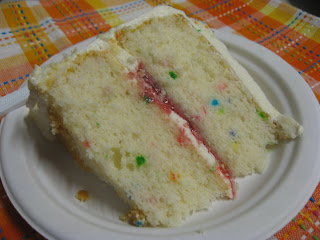 The verdict?  This cake was a huge hit with the birthday girl and everyone else who tried it.  The frosting was still rather soft, but I think it did hold up a bit better than my usual all-butter SWBC would have.  The raspberry filling in the middle was just what the cake needed--a tart contrast to all the sweetness.  I'll definitely be using that again.
I had a lot of fun making this cake.  I love the way it turned out.  One of my favorite parts of baking is pulling together a bunch of components from different sources to make something new.  I might not make this exact cake again, but that's okay, since I'll enjoy making the next one just as much.  I encourage you to pull some books off your shelves (or find recipes online, if you prefer) and do the same thing.  Have fun! 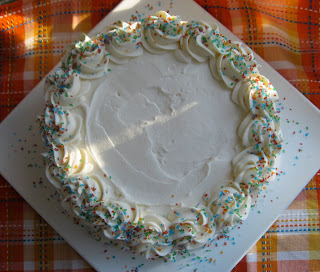