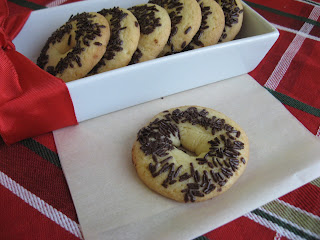 Yes, I'm behind.  But I figured I'd better get another one of these cookies baked and posted before the group disowns me. =)  On one hand, I don't have much of an excuse, since I've been on vacation this week.  But in reality, it's been a busy week--lots of appointments and other stuff I can't get done when I'm working.  Tuesday, Brianna and I went to the eye doctor and we found out that Brianna needs glasses.  She has mixed feelings about it; guess we'll see how things go once we pick up her glasses sometime next week.  Wednesday was Gillian's turn--4-year-old check-up.  Five shots, which she took amazingly well.  I only got one (flu shot), and I think my arm bothered me more than her legs bothered her after the first day. =)  Thursday was consumed with Brianna's class holiday party (I baked cookies for them to decorate), and Friday I helped with Gillian's daycare party.  I had every intention of baking more cookies, but I decided to go with spiced nuts as teacher gifts, figuring they would get plenty of sweets from everyone else. 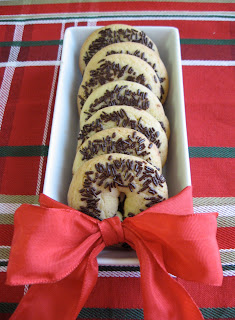 And so it managed to get all the way to Saturday, and I hadn't baked another one of these Cookies We Love.  To be totally honest, I guess I'm just not feeling the love for any of these cookies.  It seems like I run into problems no matter which one I think about making.  The next one I had my eye on was the Galletas con Chochitos.  Several of the other bakers have made these, and there were some reports that they spread a lot and just weren't that exciting.  But I finally just decided to forge ahead and see how they would turn out. After all, I got these amazing chocolate sprinkles from King Arthur Flour, and really wanted to use them.
I admit, I can't leave well enough alone, and I made some changes to the recipe.  The first thing I did was replace two of the egg yolks with a whole egg.  I have more egg whites in my freezer than I can count, and just couldn't face the idea of adding three more.  I mixed up the dough, and decided to chill it before forming the cookies, since it was pretty sticky.  I also changed the method for forming the cookies.  I've run into this debate before when making bagels.  I'm firmly in the "form a rope and join the ends together" camp, rather than the "make a ball and poke a hole in the middle" faction.  So I went with my preferred shaping for these cookies, too.  The ends don't always want to stick together, but that's okay, because they'll fuse when the cookies bake.  I also used up the leftover egg white making spiced nuts, so I just brushed the tops of the cookies with some water (I used my finger dipped in a bowl of water) and then dunked them in the sprinkles.  That worked just fine.  The final change I made was to the baking temperature.  I baked one pan at the recipe temperature of 300ºF (for 15 min) and got cookies that were cakey and didn't have much color.  So when I made the second pan (the next morning, after letting the remaining dough chill overnight), I changed the temperature to 350ºF and baked the cookies until they were nicely browned on the bottoms and edges, about 12 minutes.  (I'm not sure of the exact timing;  I turned off the timer without realizing it. Oops.) 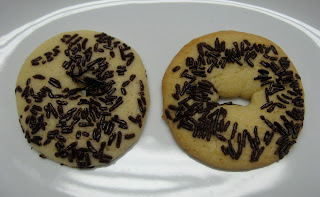 Cookie from batch #1 on the left, batch #2 on the right
The verdict?  I definitely liked the second batch better.  I prefer my butter cookies browned and crisp.  Brianna, on the other hand, gave the first batch a thumbs-up, since she liked the softer texture.  Something for everyone! =)  I'm not sure if I'll make these again, since they seemed rather fussy for something that just wasn't that exciting in the end.  I'll definitely be finding a use for the rest of the sprinkles, though. =) 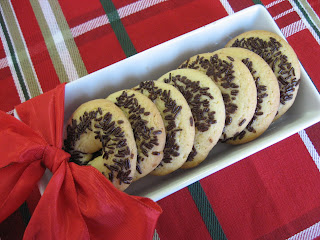 If you'd like to try this recipe, you can find it here.  And be sure to check out what the other cookie bakers have made over the past couple weeks:
Courtney of Coco Cooks
Andrea of Andrea’s Recipes
Claire of The Barefoot Kitchen
Judy of No Fear Entertaining
Kelly of Sass & Veracity
Michelle of Big Black Dogs
Renee of Flamingo Musings
Sandy of At the Baker’s Bench
Tiffany of The Nesting Project 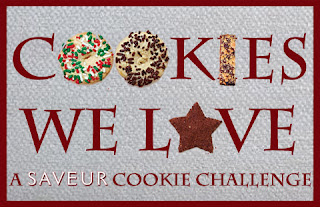