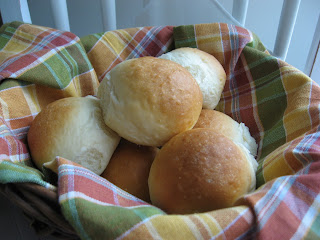 Most of the time when I tell people that I’m going to be on vacation for a week, they ask if I’m going anywhere. More often than not, the answer is no. This time of year, Brianna is in school. Plus it’s not exactly inexpensive to fly four people to another part of the country (since none of our family members live anywhere near here). And honestly, I’m okay with that. Traveling long distances, especially with young children, can be pretty darn stressful. I’m quite content to stay at home and do some baking, take some naps, and maybe even do some cleaning up around the house.

This week I had more than the usual incentive for the cleaning up part. My dad came down from Pennsylvania for a few days. I wish he could have brought some of the cooler fall weather with him, but he was pretty happy with our warmer temperatures. He got to spend some time with the girls, even with B in school. I’m particularly glad he got to spend some one-on-one time with G, since she often gets overshadowed by her older sister. (Though Gillian certainly does her best to make her presence known.) Jamie and I even got to have dinner out by ourselves one night, while Dad took the girls to McDonald’s. Yay for grownup, uninterrupted conversations! =)

With Dad here, I didn’t do quite as much baking as I might have on my own, but that’s okay. The baking I did do was mostly for him. Gillian and I made crumb cake for breakfast yesterday, which is one of his favorites, and I packed some of it up for him to take for breakfast on the plane this morning. We also had to make chocolate chip cookies, which I knew he’d be more than happy to help us eat. (And a bunch of those got packed up for his carryon, too.) But the surprise hit of the week was some simple rolls that I made. 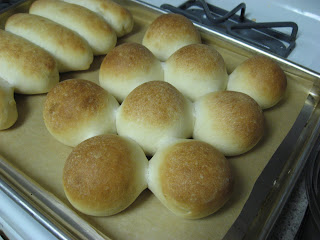 It started with dinner on Sunday. We were having hotdogs (with sauerkraut for me & J; with ketchup for the girls). Brianna had requested them a week or so before, but I kind of forgot that they were in the fridge. Since I started BYOB, I almost always make my own hot dog and hamburger buns. I was getting ready to lookup my usual bun recipe from KAF, when I remembered that one of the Mellow Baker recipes for this month was Soft Butter Rolls. I pulled my book off the shelf and took a look at it--it was an easy enriched dough recipe that wouldn’t take all that long to make. I also took a look at the MB discussion board for this recipe. Unfortunately, the first couple reviews I read weren’t very positive. But I decided to give it a try anyway.

The dough was very easy to mix up--it’s a straight dough, so no preferments to worry about. And it used a generous amount of yeast (about 8 g according to the errata) which allowed the dough to rise fairly quickly despite the additions of butter, sugar and egg in the dough. The dough was mixed, then allowed to double. Then the recipe called for dividing the dough into very small portions. I went a little bigger.  I made 5 oblong buns at 75 g each and then formed the remaining dough into round rolls of about 60 g each (yielding 9 rolls). The buns and rolls were placed relatively close together on a baking sheet so that once they were done rising and baking, they were touching each other, keeping the sides soft. Since several people commented that their rolls browned quickly, I baked mine for 13 minutes even though they were larger in size than the ones in the recipe. 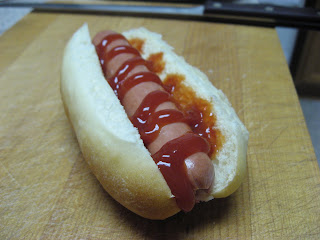 The verdict? Well, despite my worries, these were a huge hit with everyone in my family. The dough made excellent hot dog buns--sturdy enough in the face of drippy sauerkraut, but soft inside. Brianna has been quite happy to use them for small sandwiches in her lunch. I ended up making a second batch (just round rolls) to go with beef stew this week--they were really tasty when consumed hot and dripping with butter. I substituted 100g of white whole wheat flour for an equal amount of the bread flour in that batch, and really liked the result. I will definitely be making these again--it’s nice to have another fairly quick and tasty dinner roll in my repertoire.

If you’d like to try this recipe for yourself, you can find it on page 258 of Bread. Be sure to make note of the corrected yeast amount (should be .29 oz, or about 8 g).  And to see what all the other Mellow Bakers thought of this recipe, check out the discussion board.  For lots of other fun bread options, check out Yeastspotting! 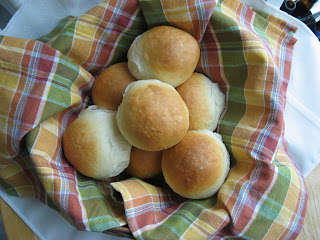