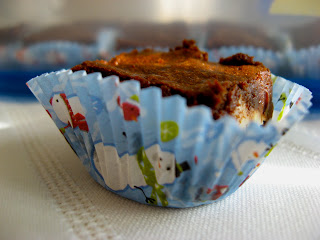 Since July 5th was a federal holiday this year (due to the 4th falling on a Sunday), I had the day off.  The daycare was closed that day, too, so I had both girls home with me, while Jamie had to work.  (UT has its own ideas about holidays sometimes.)  Since I'd already been home with them for Saturday and Sunday, I was really hoping that they wouldn't drive me completely crazy.  I was really brave that morning, and took them to Target in search of new puzzles.  That trip went better than expected, so I was even braver in the afternoon.  I let them both help me in the kitchen.  One at a time is usually just fine, but with both of them, things usually degenerate into arguing and sniping at each other.  But they were really excited at the prospect of helping me with this week's Tuesdays with Dorie recipe.  Karen of Welcome to our Crazy Blessed Life picked Brrr-ownies for us to make.  I think the girls were intrigued by the idea of putting candy (in this case Peppermint Patties) into brownies. 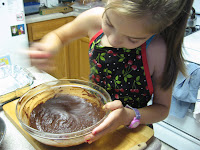 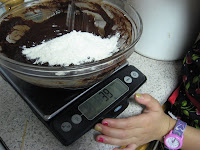 I've discovered that the key to having both Brianna and Gillian in the kitchen with me is to give them different jobs. Brianna is now at the point where I can let her help measure stuff.  I use my scale for everything these days.  She knows how to tare, and since I use grams most of the time now, that's what she gets to use, too.  Starting her out right!  =)  Maybe this way it'll end up being more intuitive for her that it was for me at first.
The girls both like to stir, so usually Gillian gets dry stuff (flour, salt, baking powder, etc), while Brianna gets to do the wet stuff (liquids, eggs).  They fight over who is going to get to crack the eggs, which up until now has consisted of tapping the eggs on the counter until they crack a little, then giving them to me to actually break the shell the rest of the way.  This time, though, I let B do the whole thing, and she was quite startled when the shell on one egg separated unexpectedly.  No eggshell in the bowl, though, so it was a success!  G would have been giving me a hard time about letting B do the eggs except that I'd given her the most important job--cutting up the peppermint patties.  Armed with a plastic knife and lots of muscle, she carefully cut each pattie into quarters: 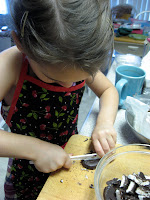 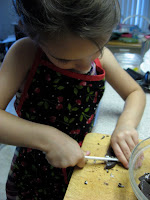 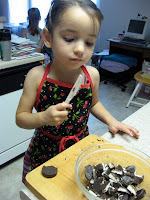 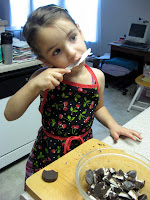 At least she waited until she was done to lick the knife!
Once she was done, I stuck the bowl in the freezer to chill the pieces.  A number of people reported on the P and Q this week that they had problems with the peppermint patties melting and bubbling out of the brownie batter, and I thought the chilling step might help.  Once Brianna finished mixing up the batter, I carefully folded in the peppermint patties and spread the batter in a pan lined with non-stick foil.  (That stuff is great!)  We baked the brownies for about 30 minutes.
Brianna complained that I don't bring treats for her teachers often enough, so I told her that we could take these brownies in for them.  Not knowing how many people would be there, I went for pieces that were bite-sized.  I was looking for something to put them in, and discovered that I still had some snowman mini cupcake papers.  I figured they would be perfect for these minty treats.  Christmas in July, anyone?  =) 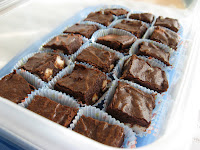 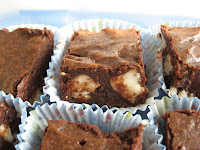 The verdict?  These brownies were quite good.  They lasted longer at the school-age building (where B is for the summer) than they usually do with G's teachers, but the container still came back empty.  (I tell them they have to return it so I can fill it up again.)  Brianna and Gillian liked them, too, and were happy to tell Jamie all about how they helped make them.  I wasn't surprised, though, when B asked if the brownie recipe could be made without the peppermint patties.  She tends to like things without add-ins.  I liked the big pieces of peppermint patties, and I think the size helped keep them from melting too much and making a mess.  I would definitely make these again.
If you'd like to try this week's recipe for yourself, you can find it on Karen's blog.  And don't forget to head over to this week's Leave Your Links page to see what everyone else did! 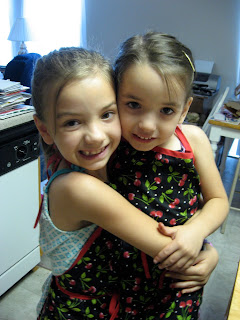