I did it my way 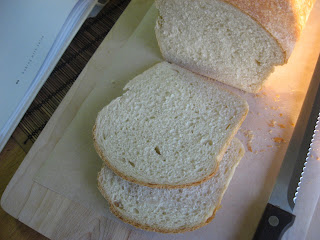 I used to be so good.

When I first joined Tuesdays with Dorie four years ago, I was very excited.  And I was careful to follow the recipes as written.  For my first recipe, the Brown Sugar-Apple Cheesecake (2/12/2008, can you believe it's been that long?!), I even bought a new pan, since I didn't have the 10" springform pan that was called for in the recipe.  That was before I learned to make small versions of some recipes, so we didn't have the temptation here at home and I didn't always have to find other people to eat things.  Then I started to play around more with the recipes, and not just in the ways that Dorie suggested.  Which brings me to this week's recipe.  I was excited to see that Laurie & Jules picked a bread recipe for our first week of TWD: Baking with Julia.  I love to bake bread.  At one point, I was baking pretty much all of the bread-type things that we ate.  I've backed off a bit from that, since work and kids have been taking more of my time, but I still like to bake as much of our bread as I can.  Because I've baked so many yeast loaves, I've tried a variety of different techniques and definitely have some favorites.  So when I started to make the recipe for this week, I couldn't help myself.  I pretty much stuck to the ingredient list, but went my own way when it came to mixing and kneading. 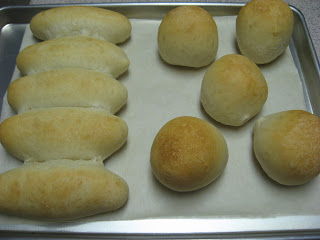 I'm getting ahead of myself a bit.  For this new incarnation of TWD, things have changed a little bit.  Instead of doing a recipe every week, we're doing two a month, on the 1st and 3rd Tuesdays.  The expectation is that everyone will bake at least one of the recipes each month, if not both.  The hosting duties will be determined randomly from those interested in hosting a particular recipe; if you want to be a host, you need to participate at least once per month.  For this first recipe of the new book, Baking with Julia, our hosts are our fearless leaders, Laurie and Jules.  They picked White Loaves (p. 81-82) for us to make this week. 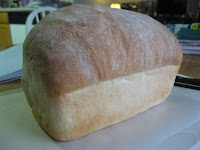 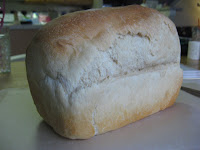 I don't make straight white bread all that often.  I usually substitute some whole grain flour for part of the white flour in that sort of recipe.  I figured I should try to stick with the recipe, though.  It says that you can use bread flour or all-purpose flour; I decided to do half of each.  I pretty much always make full recipes of bread, since we eat a fair amount of it (one loaf usually goes in the freezer).  In this case, I knew we needed hot dogs buns for dinner this week, so I made one regular loaf and made rolls with the rest of the dough (some oblong, some round).

I measure pretty much everything by weight, so the first thing I did was sit down with my notebook and do some math.  The information in the front of the book led me to use a weight of 5 ounces (about 140 grams) per cup of flour.  That gave me just about a kilo of flour all together.  I used 560 grams (20 ounces) of water, but would increase that a bit next time since the dough was rather stiff.  I always use instant yeast, and since you need less of that than active dry yeast, I went with 7 grams.  13 grams of sugar, 17 grams of salt and 55 grams of butter rounds out the list of ingredients.

I started off doing the initial mixing by hand with my dough whisk.  Then I switched to my stand mixer, with the dough hook.  I quickly realized that wasn't going to work without overheating my mixer, so I was going to have to knead by hand.  I wasn't in the mood for an extended stint of hand-kneading, especially once the butter was in there, so I went with a different method.  In a lot of the Dan Lepard bread recipes I've made, you knead the dough for very short periods every ten minutes until the dough starts smooth out and the gluten is developed (3-4 periods of kneading for about 10 seconds followed by a 10 minute rest).  Then you let the dough proof for about 45 minutes undisturbed.  You can read more about the technique on my friend Nancy's bread blog.  Once the dough finished its bulk proof, I shaped it.  I used about 820 grams of dough for the loaf, and made 10 rolls of about 80 grams each.  I realized after baking that I probably didn't let my shaped dough rise quite long enough--my loaf had a ton of oven spring, and ended up kind of deformed on one side. =)  I baked the rolls for 20 minutes and the loaf for 35 minutes, taking the bread's temperature to make sure it was done (about 200ºF internal temperature). 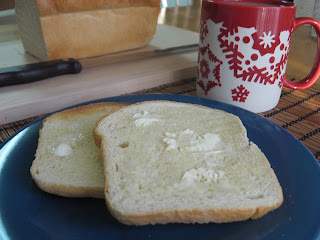 The verdict?  Definitely a nice white bread--it was very tasty as toast and had a nice texture.  I think the hot dog buns will work out well and stand up nicely to some sauerkraut.  B took one of the rolls in her lunch; I'll have to check with her later to see what she thought.  G ate one of the rolls for breakfast and informed me that it was "too puffy," meaning that she'd rather have an oval roll than a round one.  But except for the shape, she liked it.  I doubt this will replace my other favorite white loaves, but it's always fun to try a new recipe.

If you want to try this bread for yourself, you can find the recipe in Baking with Julia or over on Julie's blog.  Be sure to visit our other host, Laurie, too.  And check out this week's Links to see what the hundreds of other TWD bakers thought.  If you'd like to join in the fun (assuming you haven't already) you can find the sign-up info here.